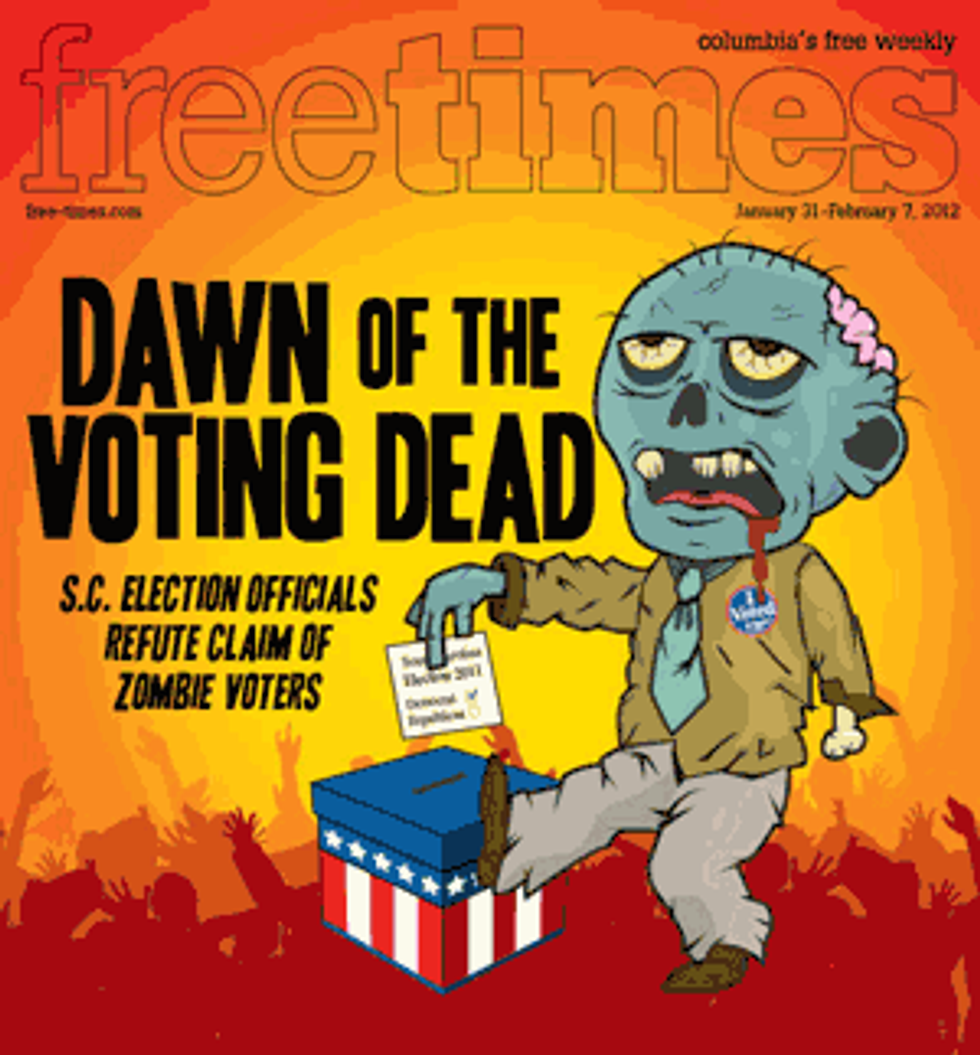 Zombies are all the rage these days, from the video games kids are playing to teevee shows and movies, you can’t go anywhere to escape them. Not even the voting booth, according to South Carolina lying liar Attorney General Alan Wilson. From the Columbia Free Times:

For a while last year, you couldn’t turn on Fox News without seeing S.C. GOP Attorney General Alan Wilson saying things like, “We know for a fact that there are deceased people whose identities are being used in elections in South Carolina.”

That’s right people – it was a FACT. Not a rumor, or gossip, or hearsay, or an educated guess based on circumstances, but a stone-cold FACT. If only some state agency would spend 18 months investigating this, so that Attorney General Alan Wilson could pimp a 500-page report to show how correct his statement about facts would turn out to be.

A year and a half after a zombie voter fever fell over Republicans in campaign mode, a state police investigation found no indication that anyone purposefully cast a ballot using the name of a dead person in South Carolina.

Man, this must be embarrassing for Attorney General Alan Wilson, huh? Let’s sexplore.

According to the report, prepared by the State Law Enforcement Division, there were some instances when dead people were recorded to have voted. How could such a thing happen?

[State Election Commission director Marci Andino] explained that of the initial batch of six names of allegedly dead voters on the DMV’s list, one had cast an absentee ballot before dying; another was the result of a poll worker mistakenly marking the voter as his deceased father; two were clerical errors resulting from stray marks on voter registration lists detected by a scanner; and two others resulted from poll managers incorrectly marking the name of the voter in question instead of the voter above or below on the list.

Who would have thought that a perfectly reasonable explanation was at hand, rather than nefarious South Carolinians seeking to game the system in one of the most Republican states in the union? What would these people hope to accomplish? To deny crazy GOP asshats a 12-point margin of victory, giving them only an 11-point margin instead? Seriously, if you are gonna commit voter fraud (WHICH WE DO NOT ENDORSE), do it in Ohio or Florida – you know, a state that matters.

When the Columbia Free Times called Attorney General Alan Wilson for a comment, he was suddenly at a loss for words. After months of fear-mongering and national attention-grabbing, he was suddenly unavailable for comment, and instead sent a lackey to give a statement that basically says nothing at all, because it must be really really embarrassing to be such a lying asshat and have the whole state know that you are an attention-seeking whore that not even Elliot Spitzer would bang.

Given that absolutely no evidence of voter fraud exists, after an exhaustive report, we are sure that South Carolina will celebrate this fact by backing off of batshit crazy voting ID laws, right? Because why pass laws to solve a problem that doesn't exist -- it would be a waste of taxpayer money, right? Yeah right. Immediately following the SCOTUS decision to strike down the Voting Rights Act, this is what Alan Wilson had to say:

"This is a victory for all voters as all states can now act equally without some having to ask for permission or being required to jump through the extraordinary hoops demanded by federal bureaucracy."

Of course, just last year, the South Carolina photo voter ID law was found by the courts to intentionally discriminate against black voters and had to be modified. Those silly "extraordinary hoops" that stop racist laws! Sure am glad those are gone, aren't you?

We can only guess that Alan Wilson is preparing for a run for Congress. Perhaps he is seeking a position on the House Oversight Committee, so he can join Rep. Darrell Issa in fabricating scandals, getting on teevee, then being turned into a laughing stock when those scandals turn out to be non-existent. Alan Wilson 2016!