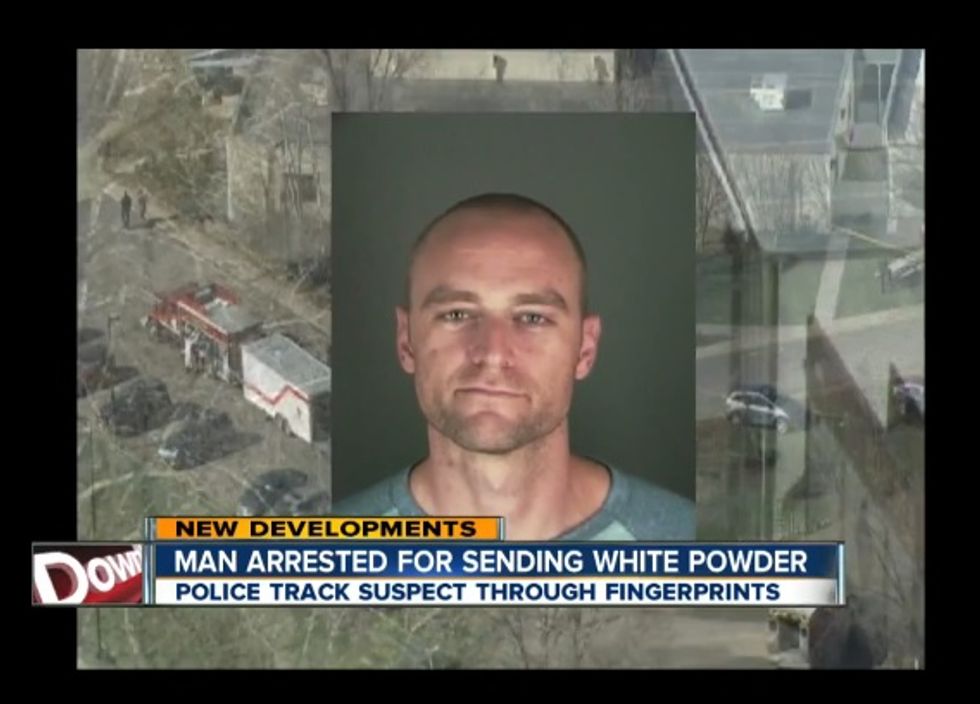 In yet another completely isolated incident, a rightwing nutjob and self-identified "Sovereign Citizen" has been arrested for sending some amusing Passover gifts to a couple of Jewish targets in Boulder, Colorado. Jeffrey Klinkel, our patriotic hero of the day, was arrested Friday on "two counts of felony menacing, explosive hoax and interference with a school facility" in the April 6 incident in which he allegedly sent envelopes containing white powder to Boulder's Jewish Community Center and to a synagogue, Congregation Har HaShem. The community center -- including a preschool -- was evacuated, and the employees who opened the envelope were quarantined. Looks like yet another attempted rightwing terrorist attack for Fox News to not remember.

But here's the hilarious part! According to the Colorado Department of Health, the letters only contained harmless "corn starch and/or white flour," so how is that even threatening, huh? Some people just got no appreciation of a good practical joke. The letters also included a message -- on the finest loose-leaf binder paper available -- labeled "ENEMIES" and including the message "This Goyim is enjoying the blood of her enemies for Passover." What, you're still not laughing? This is comedy gold!

According to the arrest affidavit, the JCC also received a number of fascinating phone messages from Klinkel, whose voice was recognized by a Boulder Police detective who has apparently been lucky enough to have had "multiple encounters with him." The affidavit says that the phone messages "rambled about different religious beliefs and makes a couple odd statement [sic] similar to the contents of the letters." Sadly, no copy is available online, so we're denied the full benefits of Mr. Klinkel's religious insights. We're guessing he's a liberal atheist, since they're always the terrorists.

When advised of his Miranda Rights, the affidavit states, “Klinkel also advised me that he was a Sovereign Citizen and that these rights did not pertain to him.”

That sounds like a pretty compelling argument to us! Somebody had better check to see whether the courthouse flags have gold fringe on them, too, which might also invalidate the entire case. Boulder station KMGH notes that Klinkel also has an extensive criminal history across several states -- charges include assault, check fraud, harassment, trespassing, and burglary -- although he probably shouldn't be considered a criminal because he doesn't recognize the authority of any of the states in which he's been arrested. We wonder if he's considered writing an obscenity-filled letter to the judge? That might help.

Despite Klinkel's actions aimed at sparking off a race war or some other kind of retribution against the imaginary Zionist cabal that secretly runs America, fellow sovereign citizens and patriot militiamen apparently decided not to join him in rising up and throwing off the shackles of oppression (this time, at least). Could be they're all waiting to see if they're needed to protect Texas from martial law or maybe to save that gold mine in Oregon. Nonetheless, the imaginary fight for America's soul continues, and it would probably be a good time to buy more guns.

[The Denver Channel via TPM]