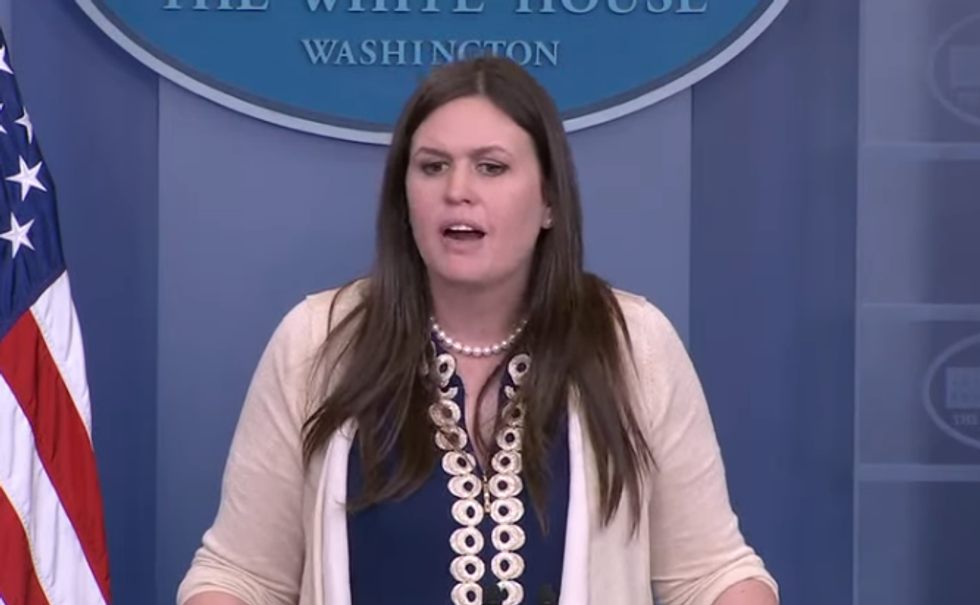 They say practice makes perfect, but we're starting to wonder. Take Sarah Huckabee "Poot Lips" Sanders, who lies all damn day long and never gets any better at it. SO WEIRD! Last week she claimed that the American people had found Donald Trump NOT GUILTY of being a creepy perv who puts his tiny orange hands all over women. They rendered the verdict last November when they voted for Hillary Clinton by a margin of 3 million votes, so why even talk about it any more?

These false claims, totally disputed in most cases by eyewitness accounts, were addressed at length during last year’s campaign, and the American people voiced their judgment by delivering a decisive victory.

When Think Progress pointed out that this is not a very good lie, Sanders promised to come up with a better one. She sent TP a list of "eye witnesses" who can vouch that Donald Trump always kept his little paws tucked in his pockets and never even met those lying hoo-ers.

Despite thousands of hours wasted and many millions of dollars spent, the Democrats have been unable to show any collusion with Russia - so now they are moving on to the false accusations and fabricated stories of women who I don’t know and/or have never met. FAKE NEWS!

Got it. He never met his business partner, a contestant on the Apprentice, a reporter who profiled him for People Magazine, or any woman who was in a beauty pageant he supervised.

You will be FOR SHOCKED to find out that there are no IRL eye witnesses to discredit Trump's abusers. Sanders rebutted Katie Holvey's claim that Trump barged into the dressing room at the 2006 Miss USA Pageant in Baltimore with a woman who claims that he did no such thing at the 2006 Miss Teen USA Pageant in Palm Springs. Also a woman who competed in the 2005 Miss USA Pageant. Have we mentioned that Sarah Sanders is BAD AT LYING?

Really, girl? Links to FAKE NEWS CNN? Are you even trying?

Maybe that Donald Trump guy can shed some light on the subject of Donald Trump barging into the dressing room to ogle pageant contestants.

CNN reported last week that Trump told radio host Howard Stern in 2005 that he would "go backstage and everyone's getting dressed, and everything else, and you know, no men are anywhere, and I'm allowed to go in because I'm the owner of the pageant and therefore I'm inspecting it."

"You know, the dresses. 'Is everyone OK?' You know, they're standing there with no clothes. 'Is everybody OK?' And you see these incredible looking women, and so, I sort of get away with things like that. But no, I've been very good," Trump said.

Oh, but nobody believes anything he says! Anyway, the White House has their ace in the hole, AN EYEWITNESS. This AN EYEWITNESS claims to have been an 18-year-old man scrupulously observing Donald Trump not harassing Jessica Leeds in the first class cabin of a domestic flight in 1980. Jessica Leeds had never met the AN EYEWITNESS before, but still she confided in the young man that her dearest wish was to marry Donald Trump.

Sounds legit! But who is this AN EYEWITNESS? And why wouldn't the White House name the brave soul coming forward to protect the honor of our godly president?

Maybe because he's career scam artist, who claimed to be married to a non-existent American fashion designer, fabricated a libel suit against British media outlets, and says that he procured underage male prostitutes for Margaret Thatcher's government. Via Think Progress,

In 1987, for example, he told newspapers in England that he was engaged to fashion designer in California named Miss Leah Bergdorf-Hunt. “Both our families are delighted,” he told The Gloucester Express. It was later revealed that he was not engaged. Also there was no Miss Bergdorf-Hunt. He invented the whole thing.

He later won a substantial libel judgment from British newspapers that reported he had AIDS. But it eventually came out that Gilberthorpe himself was the source for the story. The newspapers appealed and Gilberthorpe ended up settling after the newspapers agreed to offset a small portion of his legal fees. The incident left him “very much out of pocket and with egg all over his face.”

Hmmmmmm. In lawtalk we might say he lacks indicia of credibility. In Wonkspeak, we'd say he's a liar-fucking-liar and the White House must be bloody desperate if they're willing to use this charlatan as a witness.

In sum, Sarah Sander lies like one of those tablecloths she wears to work. Which is to say, poorly and always coming apart at the seams. LIE BETTER, SARAH! This shit is embarrassing.

Are you a good Wonker who sends us money by Amazon? Well not anymore you’re not, since Amazon COINCIDENTALLY stopped accepting our payments shortly after Evan’s VERY SEXIST Sanders post came out. Would you be so great as to re-sign with Paypal or Stripe? (And everybody else, you too!) K we love you bye.