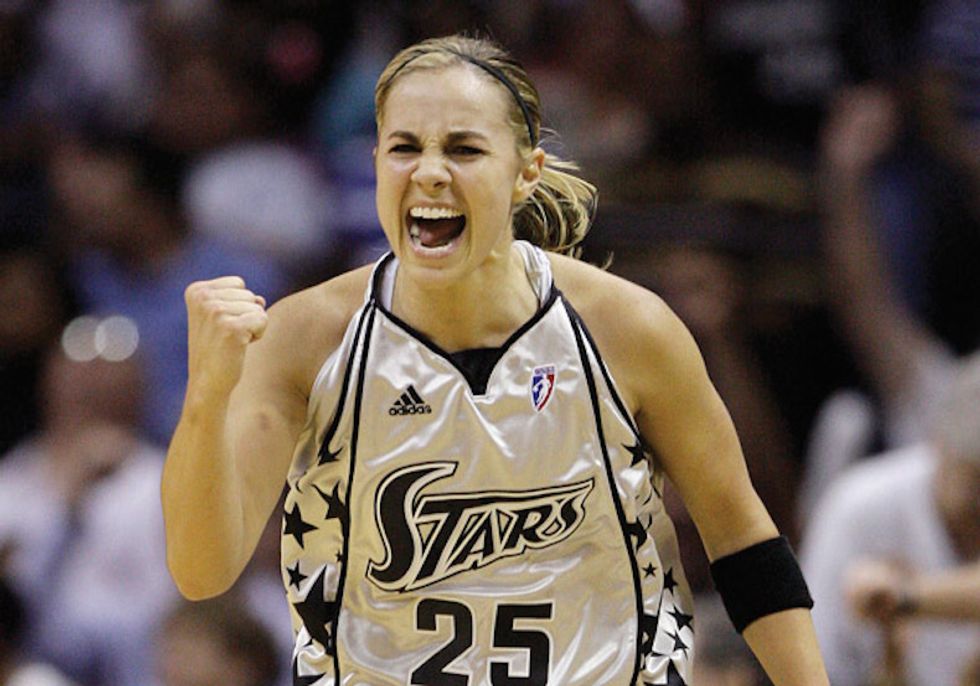 We interrupt your regularly scheduled programming of nasty vile snark mob fodder to bring you this sportsball nice time report: the NBA Champion San Antonio Spurs have hired the first woman coach in NBA history. Her name is Becky Hammon, and she went from undrafted free agent to six-time WNBA All-Star with nothing but the bootstraps the good Lord gave her. ESPN gives us a little context.

When Hammon's 15th WNBA season was derailed because of a knee injury, [Spurs head coach Gregg] Popovich invited her to attend his team's practices. Popovich was asked in May whether women can coach men's players, and he replied, "I don't see why not. There shouldn't be any limitations. It's about talent and the ability to do things. It's not about what your sex is or your race or anything else."

See, Popovich had been hinting toward Hammon's hiring for a while now. Here's a video from March in which Coach Pop mentions that once Hammon's done playing, she'll probably end up coaching somewhere, wink wink. And please, Wonketeers, consider the larger context around Popovich's remark that how Hammon "knows when to talk and she knows when to shut up," and remember that he's talking about coaching world-class athletes, not baking a delicious cherry pie.

Hammon is not the first woman to be hired by an NBA team, but she is the first to be hired as a coach (Slate's Amanda Hess has a good rundown of the NBA's pretty good track record of elevating women into the coaching ranks of the Development League). More importantly, Hammon's hiring vindicates Yr Wonkette's love for the WNBA, which was notably mentioned that one time we called ourselves out for being a sexist pig.

You are pretty awesome, Coach Becky Hammon, and on behalf of the Greater Wonkette Co-Prosperity Sphere, we wish you good luck.