Start Your Saturday Right, By Watching A Hero Throw Coffee At Alex Jones! 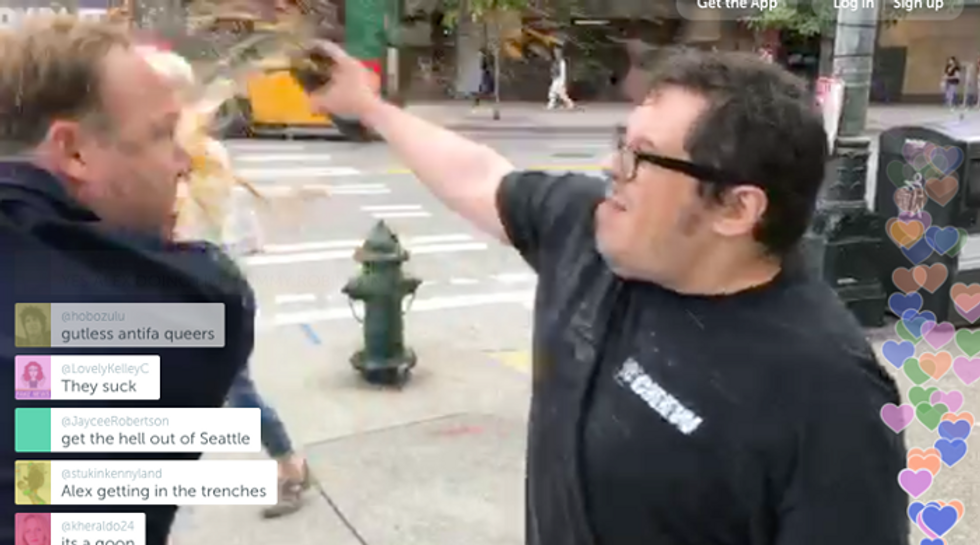 Today is probably going to be rough, what with a bunch of yahoos rallying in Boston for their "Free Speech" rally -- a concept they neither actually support nor understand -- but we here at Wonkette believe in self care, so we would like to bring a little sunshine to your day in the form of a video of a good samaritan throwing coffee in the face of Alex Jones as he walked down the street screaming about the illuminati or whatever.

The coffee thrower has been identified as Jake Stratton, a local figure in Seattle wrestling:

Prior to Jones getting a face of what definitely must have been lukewarm coffee judging by his reaction, and not "boiling hot" coffee as Jones and his supporters keep saying (I spill hot coffee on my self REGULARLY, so am kind of an expert here), he was confronted by another good samaritan who told him to fuck off. This caused him to jaunt down the street yelling at the man for not being an "intellectual" and listening to the mainstream media. Apparently, the only reason to not like Alex Jones or think he is bonkers is because you listen to the mainstream media. Otherwise, a dude who screams about gay frogs and juice boxes that turn children gay and how he is constantly being attacked by armies of goblins (who may or may not also be gay) would seem very normal to you.

Unless you are the kind of person who doesn't know what the queers are doing to the soil.

Yeah, they're building landing strips for gay martians probably with Hillary Clinton, probably at pizza places across the country. That is the end plan, I believe.

By the way, that song was recorded in 1988, well before Alex Jones was on the scene. Which I think means that Rodney Anonymous is either psychic, or that Alex Jones is a figment of his imagination somehow.

We don't know if the coffee was Jones' SUPER AWESOME PATRIOT BULLETPROOF COFFEE that he hocks on his show, but probably it was not.

Anyway, we should all put this video in our files for when we are having a bad day, because it is delightful, and Alex Jones should have coffee poured on him everywhere he goes.