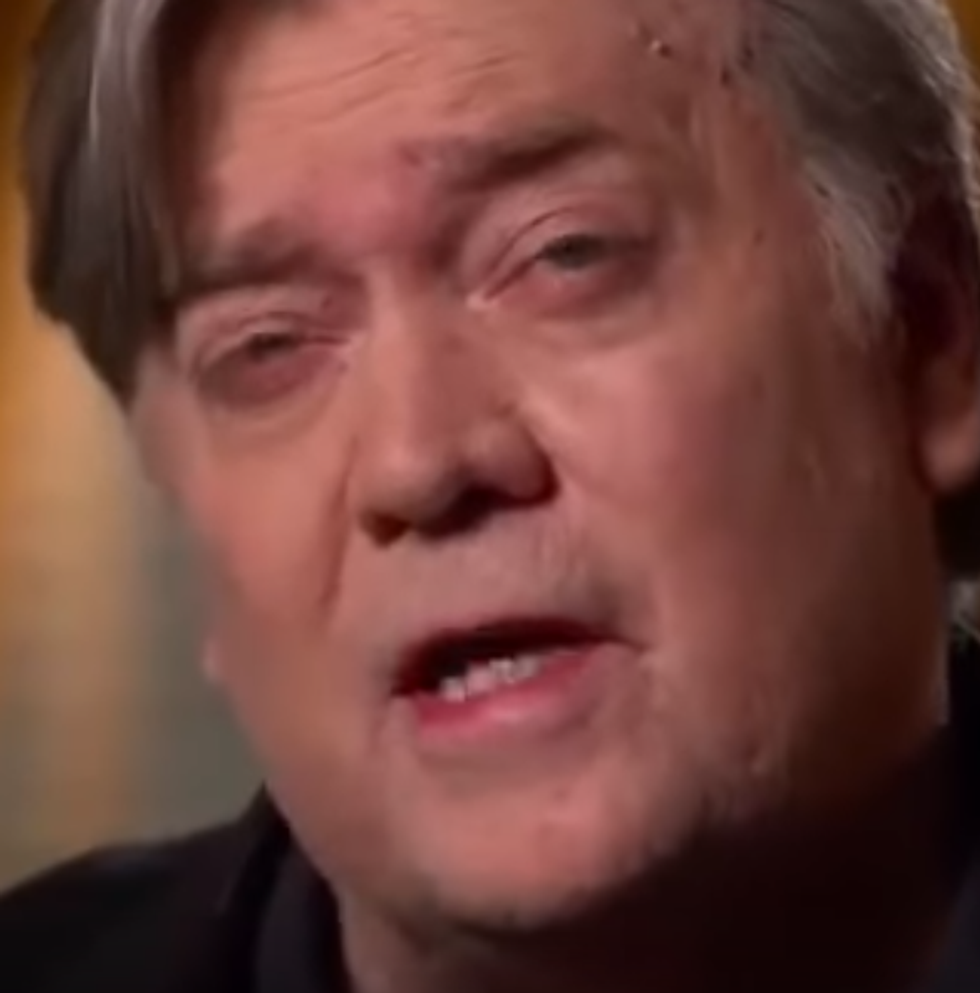 Gather 'round all ye children, for Vanity Fair has a very funny scoop about Steve Bannon!

In October, Bannon called an adviser and said he would consider running for president if Trump doesn’t run for re-election in 2020. Which Bannon has told people is a realistic possibility. In private conversations since leaving the White House, Bannon said Trump only has a 30 percent chance of serving out his term, whether he’s impeached or removed by the Cabinet invoking the 25th amendment. That prospect seemed to become more likely in early December when special counsel Robert Mueller secured a plea deal from former national security adviser Michael Flynn. Bannon has also remarked on the toll the office has taken on Trump, telling advisers his former boss has “lost a step.” “He’s like an 11-year-old child,” Bannon joked to a friend in November.

LOL fuck it, go ahead and laugh. Bannon thinks this is a possibility on God's green earth despite how Mitch McConnell and the rest of 'em are openly laughing at him now, and despite how he gave up his last shred of credibility to go all in on Roy Moore's Allegedly Child-Fondling Hands and managed to lose a GOP Senate race IN ALABAMA, where Democratics are viewed WAY WORSE than pedophiles.

Guess Anthony Scaramucci was right when he said Bannon likes to suck his own cock, but Christ, Bannon, come up for air before you throw your back out.

The very funny scoop about Steve Bannon thinkin' 'bout maybe trying and failing to become the Jill Stein of 2020 came from a much longer Bannon profile, and you should read the whole thing, as they sometimes say on the internet.

But we reckon we'll excerpt you a few funny lines:

Donald Trump and Steve Bannon are like that gay movie about the brokeback cowboy square dancers, what's it called?

While the two men harbor contempt for each other that can ignite into rage, they can’t quit each other, either.

According to White House Official, Steve Bannon is ALWAYS begging for his White House job back, guess because he's just a blogger now.

He's talking about this guy, right?

According to "Prominent Republican":

“I think there was a lot of rage when he was in the White House,” the Republican said. “Steve had to subsume his ego to Donald, who Steve thinks is dumb and crazy. ... "

Steve Bannon doesn't give a fuck what you think.

See? He doesn't give a fuck or a shit or a care. He is like one of those memes where is a lady is like "Oh no, I have lost all the fucks I have to give!"

“I haven’t even gotten to 9/11. I mean, 9/11! Think about if 9/11 had happened on Trump’s watch. We would have gotten 100 percent of the blame by the Bush guys. And they said, well, we just got here. What do you mean you just got here? That’s what gets me about them coming after Trump. I really detest them. I mean, the old man is a pervert. He’s a pervert. Grabbing these girls and grabbing their asses?”

Steve Bannon has the best words.

“She’s the queen of leaks,” Bannon argued back.

SPEAKING OF IVANKA, Bannon was real mad when she said there's a "special place in hell" for people who molest kids, like Roy Moore (allegedly?) did:

Bannon was incredulous she’d make the comment. “What about the allegations about her dad and that 13-year-old?” he said, referring to the California woman who alleged Trump raped her when she was a teen (the suit has since been dropped.)

YEAH WHAT ABOUT THOSE? We are just reporting Steve Bannon's words, not trying to dissect all the grossness of how it's somehow Ivanka's fault her dad was accused of raping a 13-year-old.

Steve Bannon thinks Republicans are going to control the House after the 2018 mid-terms LOLOLOLOLOL!

As we talked, news broke that Paul Ryan is possibly not going to run for re-election in 2018. Bannon saw this as another victory, a sign that the field was tilting in his favor. Bannon said his allies in the House Freedom Caucus will have “a huge role” in picking the next speaker.

Steve Bannon is very good at political forecasting, y'all.

Weren't those funny lines? Yes they were. Now go read the whole thing (we didn't include A LOT OF STUFF), or maybe just stay here for your open thread, we don't care because we're not your real dad.