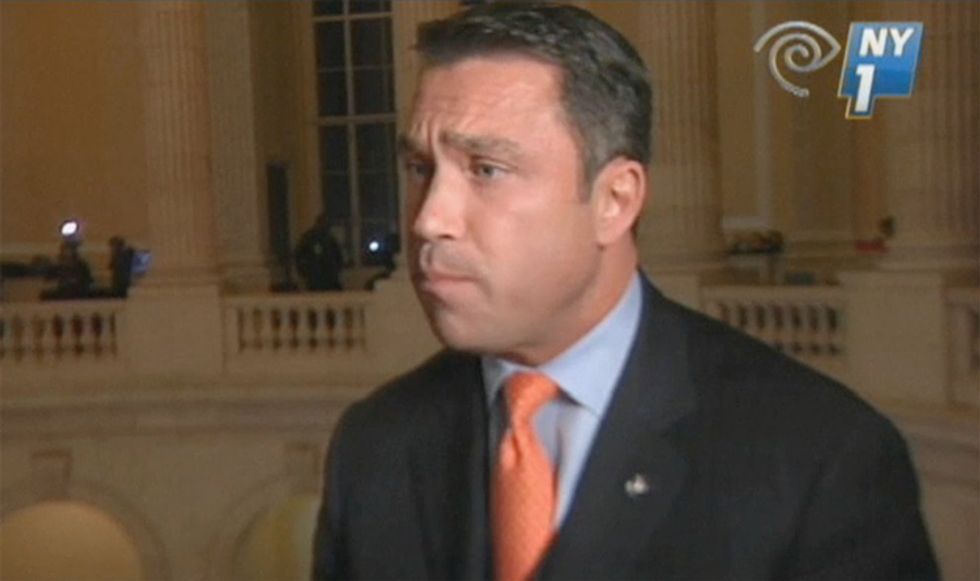 Disgraced former Republican Congressman Michael Grimm, who resigned his seat after pleading guilty to felony tax evasion in December 2014 (and shortly after being reelected despite the charges against him), wants to return to the House and serve the people of the great state of New York, because there are probably some people out there he hasn't yet threatened to throw off a balcony. Yet. And just look who can't wait to help him!

Yes, it's Steve Bannon, in casual mode, only wearing two button-down shirts because he's all relaxed. The photo was taken last Wednesday at the "Breitbart Embassy" in Washington DC, which undoubtedly smells of flop-sweat, vomit and Steve Bannon. (But we repeat ourselves.) Grimm served eight months for the tax evasion charge -- you know, a "witch hunt" -- and in lieu of a yellow ribbon 'round the old oak tree, he would like very much to be in Congress again, please. He has probably learned his lesson and will never again try to escape paying payroll taxes by paying his health-food restaurant employees in cash, under the table, at least not if he thinks anyone's watching.

Buh-Bye Rep. Michael Grimm, You Are Too Psychotic Roid-Rage Bully For This World (Video)

While it's not related to his actual criming, Grimm is probably most internet-famous for this January 2014 video of him threatening to toss a reporter off a US Capitol balcony after the reporter asked a completely out-of-line question about a fundraiser for Grimm, who was accused at the time of campaign finance irregularities (and later pleaded guilty). Grimm didn't want to talk about that, so he offered to toss NY-1 reporter Mike Scotto from the balcony if Scotto ever asked another rude question. Then, in a line that never fails to leave Rachel Maddow in a giggle-fit, Grimm menaced Scotto:

Grimm refused to apologize at first, because probably roid-rage and besides, that asshole reporter was out of line: “I doubt that I am the first member of Congress to tell off a reporter, and I am sure I won’t be the last." Later, Grimm did apologize, admitting, "I shouldn’t have allowed my emotions to get the better of me and lose my cool." Frankly, threatening to murder a reporter now looks pretty presidential, so we shouldn't assume that video will hurt Grimm's chances at all. But he damned well better explain what he meant by "break you in half like a boy," or at the very least allow an inspection of his home's crawl space.

While that video is certainly Grimm's most embarrassing moment, we can't quite decide whether it's his absolute stupidest political lowlight, since in 2013 he also had this moment of high dudgeon over the unconstitutional usurpations of power by Barack Hussein Obama, the bloodthirsty tyrant who routinely torched the Constitution and baby ducks, too:

“He has an agenda and he’s going to do whatever he has to do to pass that agenda, regardless of the Constitution,” Grimm said. “I mean, I think our founding fathers are turning over in the graves right now because he’s just so blatant in his -- the administrators, the people he puts in charge of these agencies are bold and brazen about saying, ‘yes, we’re going to make an end run around Congress.’”

And what exactly was the tyrannical crime Obama was trying to get away with that time? Encouraging the FCC to place a $4 per year fee on cell phones, to be used to expand broadband internet for school classes. Exactly like Hitler did.

So you've got ragey outbursts, tax cheating, and insane hyperbole. We can see why Steve Bannon is backing this guy's attempted comeback.