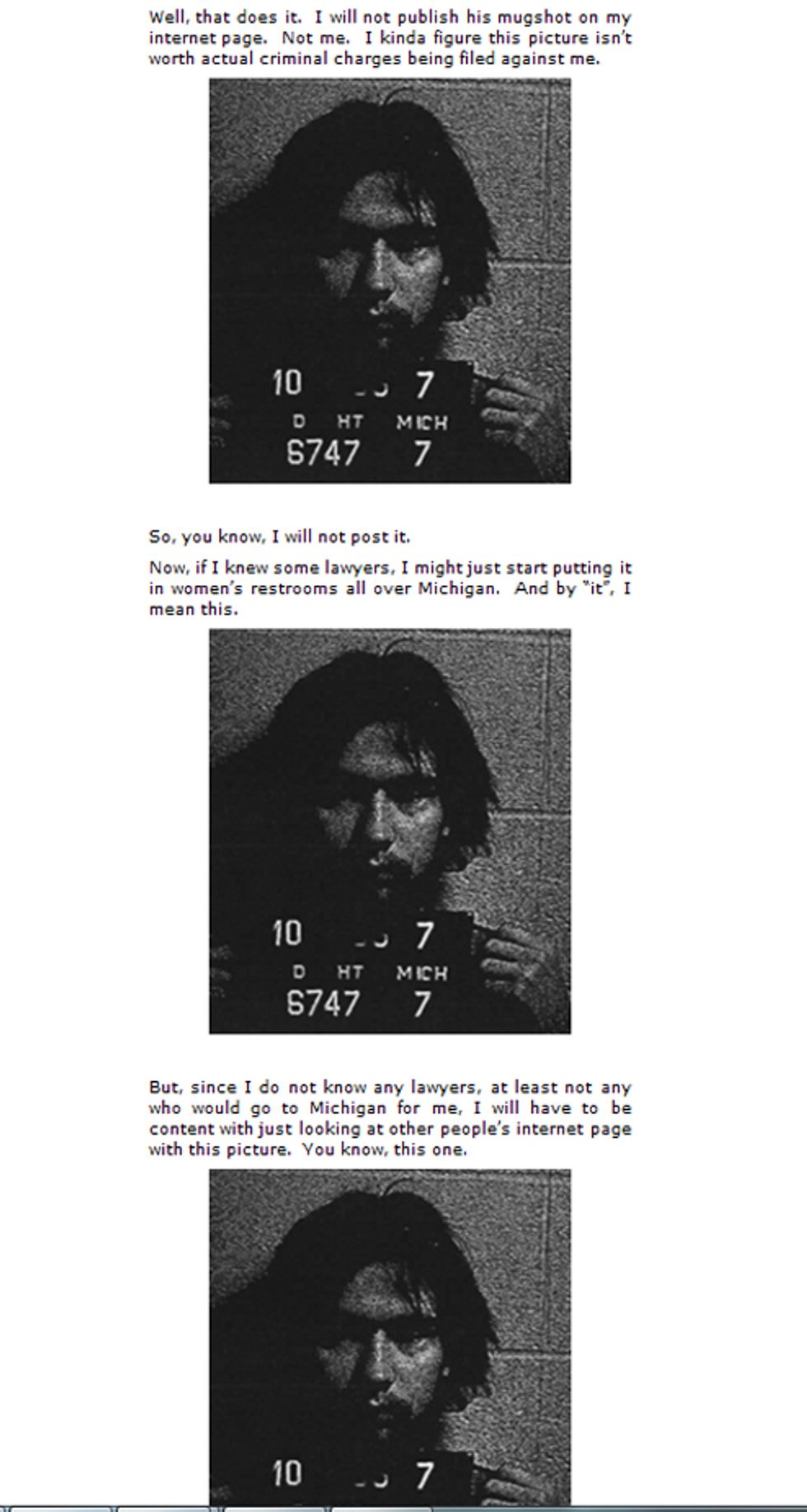 Texas Congresswhatever Steve Stockman would just like you all to know that he is totally vindicated and absolutely proven to be the victim of a horrible smear by evil forces aligned with Sen. John Cornyn, who Stockman would totally be beating in today's primary election, if only Cornyn weren't polling at 62% -- which he wouldn't be were it not for all those slurs against Stockman, accusing him of having been arrested on drug charges in Michigan back in 1977.

Because the truth is, says Stockman, he was never ever convicted of a crime in Michigan in 1977, and anyone who says otherwise, or even reproduces Stockman's mugshot (reproduced above), is a dirty criminal liar, according to a statement that may be on his website (which was out of order Tuesday morning). So just shut up and vote for Steve "Definitely Never a Felon" Stockman.

Stockman spokesman Donny Ferguson explained that the whole 1977 arrest -- young Steve Stockman was initially arrested for a traffic violation, but then officers found three Valium tablets that his girlfriend slipped into his underpants to help him while away the hours -- pretty much never actually happened, because the records have been expunged. Which is officially the same as "never happened," don't you know:

"A Michigan official has removed documents from a state website that erroneously claimed U.S. Congressman Steve Stockman had been convicted of a crime in the 1970s...Michigan's 43rd Judicial District Clerk stated Stockman was never convicted of any charge and the documents were supposed to have been destroyed in 1978."

So the records have been removed from the internet, so would you all just pay no attention to that grainy arrest photo behind the curtain, please. But that is not all -- you internet troublemakers should also know that there will be heck to pay if you keep saying that these now nonexistent documents ever referred to possible criminal behavior:

"Another Michigan official has advised Stockman he has grounds to file criminal complaints against any person or media organization that published the documents."

Say, who was that Michigan official who said that anyone publishing court records could face the long whiny arm of the law? Strangely, Ferguson didn't say, and didn't answer reporters' questions about that, either. But it sure sounds like the sort of thing people go to jail for all the time. IN COMMUNIST ROOSHIA.

Of course, as far as we can tell, nobody, not even the meanies at the pro-Cornyn PAC that Stockman sued for libel, ever said that he was convicted of a felony. But those now-removed records did show that he was initially charged with a felony, but eventually pleaded "no contest" to a misdemeanor. The PAC correctly stated that he'd been charged, but Stockman insists that's a dirty libel, because as anyone can plainly see, no such record exists. So now that that's all cleared up, Steve Stockman can get on with the important business of beating John Cornyn in today's primary. If he gains five percentage points each hour the polls are open, he should just about manage it.

Otherwise, Stockman is pretty much bringing his one-term performance-art return to the House to an end, since he gave up the chance to run for reelection to his House for this run at the Senate. Lord only knows which of the rodeo clowns running to replace him will succeed. We kind of like Brian Babin, a dentist whose favorite campaign line is “It’s gonna take a dentist to take the teeth out of Obamacare." Nice Orly Taitz vibe there. Whoever wins, they're a reliable vote to repeal Obamacare, at least.

Also, too, we have to pass along what's probably the best response to Stockman's promise to put people in jail what reproduce that now-memory-holed mugshot, from Juanita Jean's: