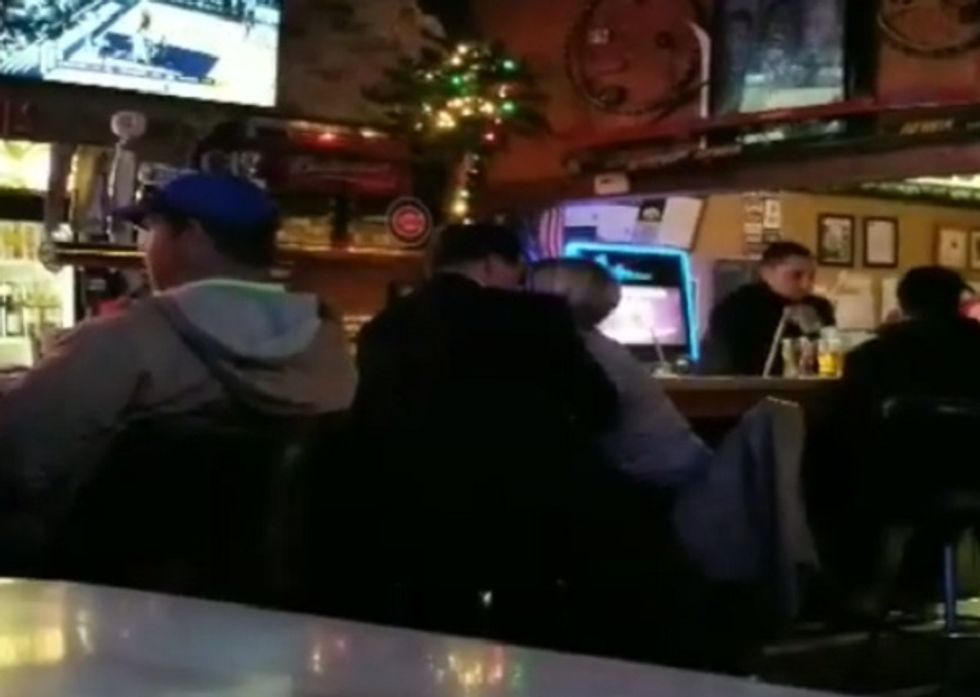 Really not the kind of constituent service that's approved of.

The majority leader of Iowa's state Senate, Republican Bill Dix, resigned today after video was posted that appears to show him kissing a female lobbyist in a bar. Or maybe it was the planet Venus, which causes so many UFO reports. It's not the best video ever. Since he did resign, we'll go with lobbyist-snogging.

The video posted to the Iowa Starting Line blog was shot on March 1 at the Waveland Tap bar in Des Moines. (Looks like we know where any future Des Moines Drinky Thing has to be scheduled. Or avoided.) Here's the video and the blog's description of the hot lobbyist-on-state-senator action:

The people who captured the moment on their camera phone say they recognized Dix from media reports, including those surrounding the Senate Republican sexual harassment trial and settlement. They observed Dix flirting with and occasionally kissing a younger woman at the bar in the evening. They are not affiliated with a campaign or party organization, but were members of the general public who happened to see the scene while at the neighborhood bar.

You can tell it's not a professional hit job because of the dang camera shaking around like it's being balanced on a seal's nose, just like a political intrigue version of The Blair Witch Project. The blog post also includes several still photos with more readily identifiable images of Dix and the lobbyist.

The blog says the woman "has been registered and works as a lobbyist for various municipality groups at the Statehouse for the past two years."

Sen. Dix has been under fire since Kirsten Anderson, the former communications director for the Iowa Senate GOP, accused him in 2013 of firing her just a few hours after she filed a complaint against him and other Iowa Republicans, alleging a toxic work environment and sexual harassment. That lawsuit was settled last fall with a $1.75 million payment to Anderson and one of those boilerplate settlement statements where Dix did not have to admit wrongdoing. He has maintained that Anderson was fired for job performance issues, which seems like maybe a difficult claim to make with a straight face after a payout that big.

After the settlement, Iowa Starting Line notes, the Iowa legislature hired an actual HR director to formalize processes for handling sexual harassment. Oh, and Dix also tried to submerge an internal report on sexual harassment in the state Senate by releasing it on the Friday after Thanksgiving last year. Now why would he have gone and done a thing like that? That report by senate staff reported problems with

“an environment on the Senate Floor with Senators making sexually suggestive comments or about sexual preferences.” They also reported there was at least one specific instance during the 2017 legislative session, as well as another where a senator made an inappropriate comment during a dense breast tissue bill (legislation on mammograms), possibly in a recent year.

Haw haw! Boobies! But really, it's Iowa -- is that really all that different from Joni Ernst getting elected on a campaign promise to castrate Barack Obama? They just have a down-home rural culture. Where apparently state legislative leaders are comfortable sucking lobbyist face.

Bill Dix had been in the Iowa Lege for 18 years; he was in the state House for 10, then lost a bid for Congress in 2006, and in 2010 got elected to the Senate. He's pushed a whole bunch of terrific rightwing legislation like limiting collective bargaining rights for public employees, prohibiting counties from raising their minimum wage, cutting workers' comp benefits, and of course restricting abortions while loosening gun laws, albeit not necessarily in the same locations. This year he helped push through a great big tax cut, too.

It's nice to know that his efforts on behalf of at least one lobbyist were appreciated.

Yr Wonkette is supported by reader donations. Please click here to slide your patronage tongue down our fiscal throat.