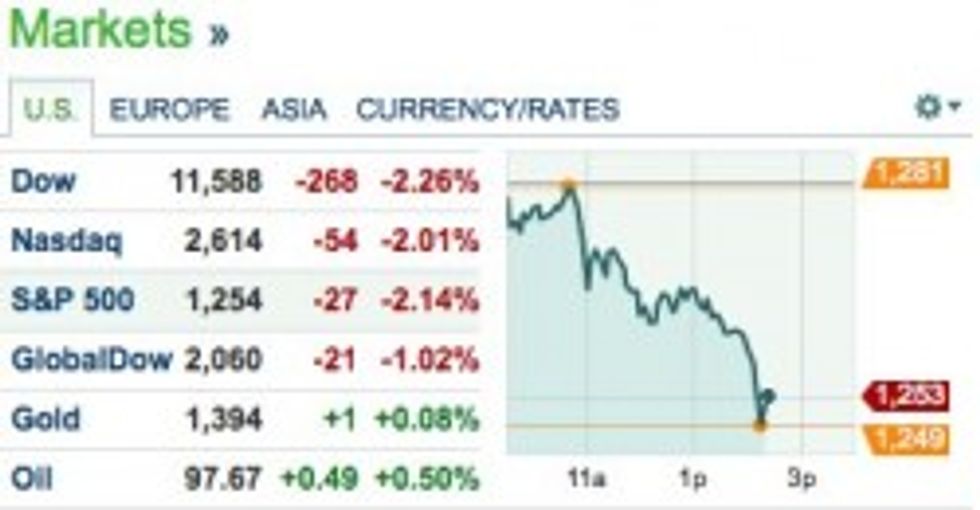 Did everybody enjoy the "jobless recovery" of the past two years? Because, uhh .... The American stock markets plunged more than 2% today as everybody freaks out about the dismal housing numbers, the continuing craziness in oil-producing Middle East/North African nations, another round of the European debt crisis and (of course) the nuclear horror show unfolding in Japan, the world's second-biggest economy. Second or third, we can't remember if China officially took over that spot before the earthquake.Third! For now .... Anyway, la la la la la.

Marketwatch, give us a nice punch in the mouth:

Dow industrials give up all of year's gains

But it has been a glorious "Bull Market," no? Those of you holding some stocks or mutual funds or 401ks (instead of a pension plan, haw haw) can "feel better" because things almost sorta got back to pre-crash 2007 levels! And if you could've dumped your 401k investments in time and then left the country and never paid the tax because you moved to Belize or wherever, like Butch Cassidy, well, who knows how life might've turned out, south of the Radiation Cloud Devastation that killed everyone in North America.

And everybody else, with the underwater mortgage and stagnant wages or unpaid internships or plain old starvation joblessness, well, that radiation cloud is looking better all the time. It's invisible, but it also seems to be smiling at me, mama .... smiling and taking us somewhere special ....