Stop, Collaborate and Put Your F*cking Hands Up: Your Florida Roundup 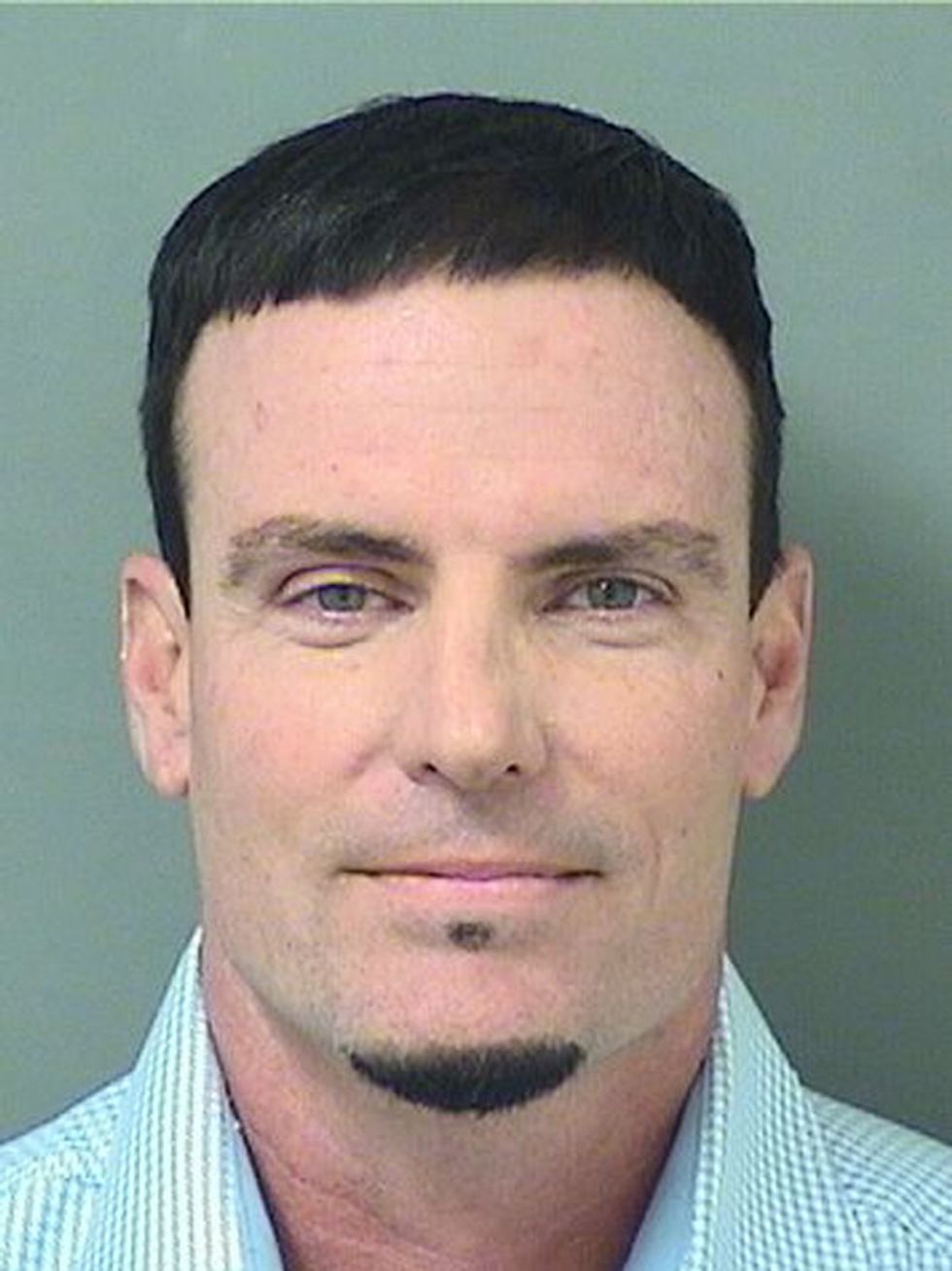 Welcome back to Florida, the quintessential backdrop for Sharknado III, where it’s weirdly not warm outside — though it ain’t like Ithaca — and we’re all freaking out a little bit because nobody has any winter clothes, thanks Obama.

Brenda Jahny-Miller came to Miami earlier this week for a vacation from the Chicago winter, where temperatures are below 0 and heaps of snow are piled up on the roads.

So South Florida’s brisk 50-degree weather Thursday morning didn’t stop her from lying on the beach with her bathing suit and sunglasses, ready to get the most out of her short vacation.

“It’s still better being here,” she said. “I’m just going to tough it out for awhile. … I didn’t even bring winter clothes.”

There was even a wind chill advisory, the presence of which the Miami Herald deigned to note with an exclamation point. It is all very sad and troubling.

Ice Is Back With a Brand New Infraction

And it is causing certain members of our normally erudite and morally upright population to behave in suboptimal ways. Take, for instance, Lantana resident Robert Van Winkle, who last week was arrested for burglarizing residential pool heaters.

The property was going through a foreclosure. Van Winkle owned and was renovating a property next door. According to police, he helped himself to the items.

Lantana investigators executed a search warrant and found the stolen loot in a property "under the care and control" of Van Winkle. He also met with police over the matter." Based on the evidence collected, witness statements, and corroborating statements, Van Winkle was taken into custody and charged with residential burglary and grand theft.

You may know Mr. Van Winkle as a reality television personality of some variant or another, but we have never seen his program because we do not watch reality television because there are two types of people in this world, those who watch reality television and those who have an even set of chromosomes, and we have made our choice. As children of the ’90s in South Florida, we do, however, remember Mr. Van Winkle for those six months or so when he bastardized that Queen riff and was everywhere all the time in those goddamn Hammer pants and that ridiculous hi-top white-boy fade, which he later augmented with the skunk stripe.

You, of course, like all red-blooded USAmericans, became quickly annoyed with “Ice, Ice Baby” on the radio every fourteen fucking seconds, but you have NO FUCKING IDEA what it was like unless you lived here back then. This, the rocket-to-the-top-of-the-charts blending of South Florida club culture with faux-gangsta appropriation of black music, was, as a cultural touchstone — with apologies to Miles Davis — the Birth of the Douche, a particular kind of South Florida douche that still today permeates the state, even if you can’t find anyone who will cop to having owned a Vanilla Ice record back in the day. (We all owned Vanilla Ice records back in the day.)

Rick Scott, the guy who became governor after his company scammed Medicare for a few billion dollars, no big deal, has a new and totally believable and compassionate explanation for why our lovely state has not taken the federal government up on its offer to pay for almost all of a Medicaid expansion that would help a million or so of our less-advantaged citizens gain access to health care: The big bad federal gubmint can’t be trusted.

Gov. Rick Scott (R-Fl.) explained why he hasn’t expanded Medicaid in Florida under the Affordable Care Act (ACA) saying of the government, “trillion dollar deficits - would you do business with them?” at Politico’s Fifth Annual State Solutions Conference in Washington, D.C., on Friday.

“Trillion dollar deficits — would you do business with them?” Scott responded. “Would you sign a long-term contract with them? Why would we do that to our citizens — get people hooked on something they didn’t ask for?”

Yes, why would we give the poors health care that our tax dollars are already helping pay for when we can preen and grandstand about Obama deficits instead (which haven't been in the trillions for a while, but details)? Also, who are these poors that aren't asking for decent affordable health care and would rather die in an alley somewhere of a perfectly preventable ailment? Why, it's almost like Rick Scott is a rich-as-fuck bastard whose entire frame of reference is other rich-as-fuck bastards, and that's the smoke-filled-room circle jerk that's running the entire state. BRB, we're going to go have a drink now.

Oh hey, have you heard that Republican Golden Boy Marco Rubio is maybe probably running for president? This is very exciting to nobody, and Marco Rubio will not be president anywhere except in his own head, especially since Jeb! already owns the Establishment Republican From Florida space and Marco tried to do immigration reform so the Tea Party people like Ted Cruz better. But that doesn’t mean he can’t try. Except Marco has said that if he runs for president he will also not run for reelection to his Senate seat next year, which has Republicans kinda nervous.

Republicans, who captured a majority last fall, must defend 24 out of 34 seats on the ballot in 2016. With Rubio on the ticket, party officials calculate their chances of holding his Senate seat would be far greater than if he steps aside, given his proven fundraising and vote-getting ability.

So far, despite the appeals made to his top aides, Rubio says he's not changed his mind to seek only one office next year.

"We have a plethora of very talented Republicans who would make great Senate candidates if they decided to run" for the Senate from Florida, he added.

Nothing To See Here, Move Along

In Florida, we love our guns. Luuuuurrrve them. Love them more than we love precious preborn children and the walking uteruses that house them, in fact. So when some redneck dipshit from Brooksville — we’ve been there, so we feel perfectly comfortable describing this man, sight unseen, as a redneck dipshit — named William DeHayes took out an antique revolver and began twirling it around his finger like a cowboy in a Western — har har lookatme! — and the gun went off and killed a pregnant lady and her five-months-along fetus, the cops and prosecutors shrugged and decided, eh, what can you do?

DeHayes spun the gun again, put his finger on the trigger, and eased the hammer to put it back in the holster.

That’s when the gun fired. The single bullet—which DeHayes swears he never loaded—entered Katherine’s temple. The 25-year-old was rushed to the hospital, where she died soon after. Doctors delivered Rehlin [the fetus] via Caesarean section, but he died 30 minutes after his mother.

Katherine’s family was heartbroken by the loss, but now say insult has been added to injury by the state prosecutor’s decision not to press charges against the man who killed her and her baby. […]

“There is no evidence to suggest the [sic] DeHayes had a careless or reckless indifference to the safety of the victims when the firearm discharged,” assistant state attorney Brad Magrino wrote in his recommendation not to prosecute.

Except for the dead girl, no, none at all. Oh, and DeHayes was hopped up on methadone and muscle relaxers at the time, too.

And if you were wondering, yes, the cops gave him his guns back.

In a story that could only happen in Florida, a police agency fired one of its dogs for biting someone in a donut shop.

Officials say 4-year-old Renzo had been with the Coconut Creek Police Department for more than a year. The Belgian Malinois bit an officer in November while tracking a suspect. Last week, he burst out of a patrol car and bit a Dunkin' Donuts worker in the calf.

And This Shit Happened, Too

Florida Naked Hero Lady jumps on nearby Lexus and masturbates.

Finally, we will bring your attention to something the good Doktor hipped you to a few days back: Our police officers have mastered the olfactory art of distinguishing between the odors of marijuana and asshole.

In the wee hours of February 12, Gainesville police pulled over Winfred Alphonso McAllister Jr. after observing his car weaving between lanes. After asking McAllister to step out of the car, the cops said they detected the smell of marijuana; McAllister claimed that it had to be left over from an earlier time when he had smoked some, and insisted he had no weed on him. Which, yecch, was technically true because he had his stash in him.

The police patted McAllister down and found the source of the smell, which turned out to be a cache of weed up his poopchute. It was, thankfully, in a bag. In an abject failure of either police disclosure or of journalism, the U of Florida Alligator does not address the degree to which some portion of the bag may have been peeking out. The people have a right to know.

That’s it for this week. Stop cramming things in the out hole, would you?