Stop Persecuting Christians By Letting Gays Shop In Your Stores! 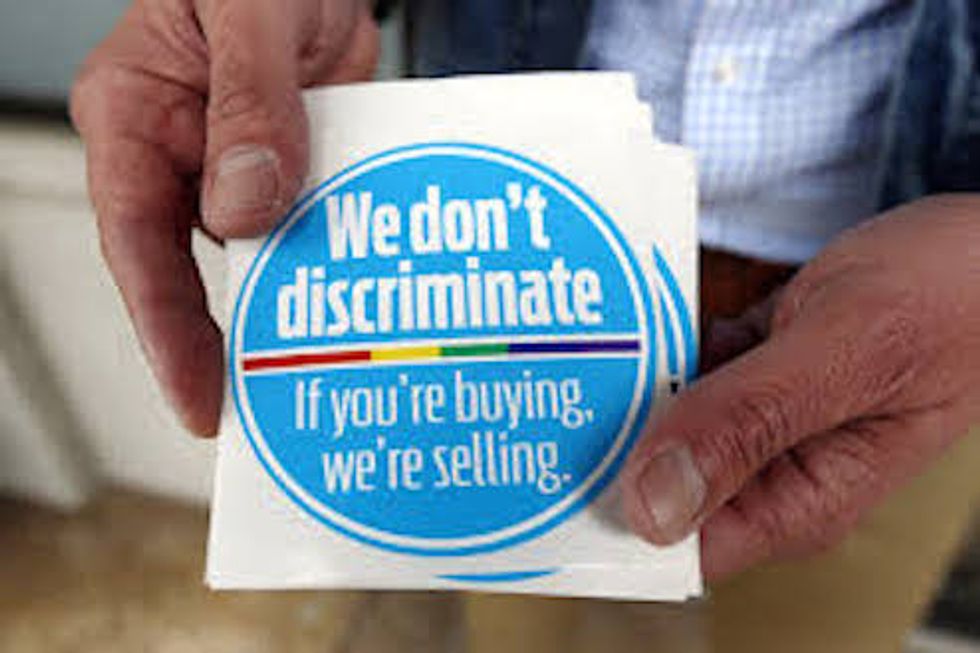 Are you guys worried about Bryan Fischer? We're totally worried about Bryan Fischer. There's just so much homosexxican behavior going on right now that he and his organization of fellow incoherent rageaholics, the American Family Association, are kind of losing track of reality. The latest salvo from the AFA is aimed at businesses who aren't willing to douse gays in lighter fluid and light them on fire, all in the name of Jesus, just for walking in the door, because of course the failure to do so is the exact same thing as ramming the homosexual behavior down the AFA's throat, one esophagus at a time.

You'll recall that last month Mississippi passed one of those terrible "religious freedom" bills that means you can discriminate against the gays because if you don't, you'll have to bake penis cakes 24/7. Some businesses thought "oh hey, we do not actually hate homosexxican money, so we will put a cool little sticker in our window that says we don't discriminate." SO UNFAIR TO CHRISTIANS.

Did you look at that monstrous pro-gay shopper sticker? It might as well just be a giant Tom of Finland cartoon with Bryan Fischer's head superimposed because it is that offensive. It's so offensive that the AFA can just feel it oppressing Christians by its very existence.

This sticker is being placed in windows of Mississippi businesses by their owners.

Ironically,this sticker represents the very promotion of discrimination...against the freedom of religious convictions.

Businesses that display this sticker believe Christians should be forced, by law, to embrace homosexuality and deny their faith in personal business practices.

Lost among the AFA's rage is the fairly routine realization that the businesses that have put up the stickers are probably not cringing at having their names republished on the AFA's little hatesite blog, because the mere act of encouraging people to come spend their gay dollars likely means that they are perfectly aware they won't be getting the dollars of the super angerbear anti-gay crowd. Plus you know that Bryan Fischer is that dude who is a really difficult costumer who sends things back ten times and then leaves you a Bible tract instead of a tip so who wants that fucker in their business anyway?