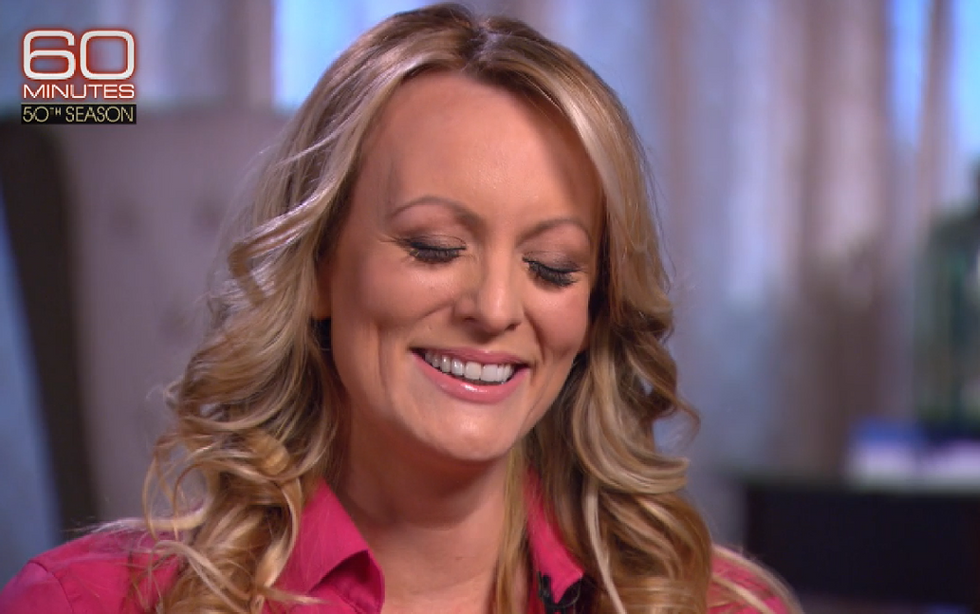 In other words, Stormy Daniels won't be commenting (yet) on what type of small rodent Donald Trump's penis reminds her of the most.

In fact, we didn't learn much from this interview! For instance, we did not learn exactly who threatened Stormy Daniels back in 2011, after she gave an interview to In Touch magazine about her affair with Trump (which never ran, because Cohen threatened to sue In Touch). However, Daniels did make clear that, though she doesn't know the identity of the man who said her daughter was pretty, and "shame if something bad were to happen to her mom," she would recognize him in a hot second.

But Anderson Cooper didn't really ask follow-up questions on that threat. About the statement Daniels made earlier this year, when she denied the affair, she said she was being pressured then too, and though there was not a threat of physical violence, she was told, "They can make your life hell in many different ways."

Cooper also didn't do any reporting on what happened back when Stormy Daniels and Playboy model Karen McDougal -- whom Trump had an affair with the same year he met Stormy Daniels -- had the same lawyer, Keith Davidson, whom McDougal now alleges was working in concert with Michael Cohen to kill her story. Indeed, during this interview, Daniels said Davidson told her the deal with Cohen, to stay silent in exchange for $130,000, would be the "best" deal for her, when it's not all that clear she couldn't have made a much better Art Of The Deal at the time.

But this is Anderson Cooper, so it's not about the deep journalism, we guess.

That being said, and to be fair, it's been clear from Michael Avenatti's public appearances that a lot of the details aren't going to come out until they go to court. Also, to be fair, we don't know what CBS decided not to air.

OK, now that all that serious stuff is out of the way, let's talk about boning. When Stormy Daniels and Donald Trump had sex, she had gone back to his hotel room, and he pulled a shitty move on her, suddenly appearing in the bedroom "perched" on the bed as she came out of the bathroom:

I realized exactly what I'd gotten myself into. And I was like, "Ugh, here we go." (LAUGH) And I just felt like maybe-- (LAUGH) it was sort of-- I had it coming for making a bad decision for going to someone's room alone and I just heard the voice in my head, "well, you put yourself in a bad situation and bad things happen, so you deserve this."

No, Stormy Daniels, you did not "have it coming." In fact, it's fucked up that in our society people still think that men are owed sex if women make "a bad decision" and go to their hotel rooms alone. Consent is consent, kids.

And she didn't want to fuck him, because he is (#ScienceFact) butt ugly and gross:

Anderson Cooper: You were 27, he was 60. Were you physically attracted to him?

Anderson Cooper: Not at all?

Anderson Cooper: Did you want to have sex with him?

Anderson Cooper: It was entirely consensual.

And Trump did not use a condom.

Daniels told the story of how she spanked Trump with the magazine he was bragging about gracing the cover of, and that once she did that -- it wasn't really sexual, she was calling him on his shit, because he wouldn't stop talking about himself -- he treated her differently and said she reminded him of Ivanka. That's right, after the pretty lady spanked him, he was like "awwwwww, you are just like my daughter":

Stormy Daniels: Just, I don't think anyone's ever spoken to him like that, especially, you know, a young woman who looked like me. And I said, you know, "Give me that," and I just remember him going, "You wouldn't." "Hand it over." And-- so he did, and I was like, "turn around, drop 'em."

Anderson Cooper: You-- you told Donald Trump to turn around and take off his pants.

Anderson Cooper: And did he?

Stormy Daniels: Yes. So he turned around and pulled his pants down a little -- you know had underwear on and stuff and I just gave him a couple swats.

And then after that:

Stormy Daniels: He quit talking about himself and he asked me things and I asked him things and it just became like more appropriate.

Stormy Daniels: Yeah. He was like, "Wow, you-- you are special. You remind me of my daughter." You know-- he was like, "You're smart and beautiful, and a woman to be reckoned with, and I like you. I like you."

Donald Trump has responded to the Stormy Daniels interview on Twitter, by not actually responding to it:

And what does Stormy Daniels have to say about that?

He knows I'm telling the truth.