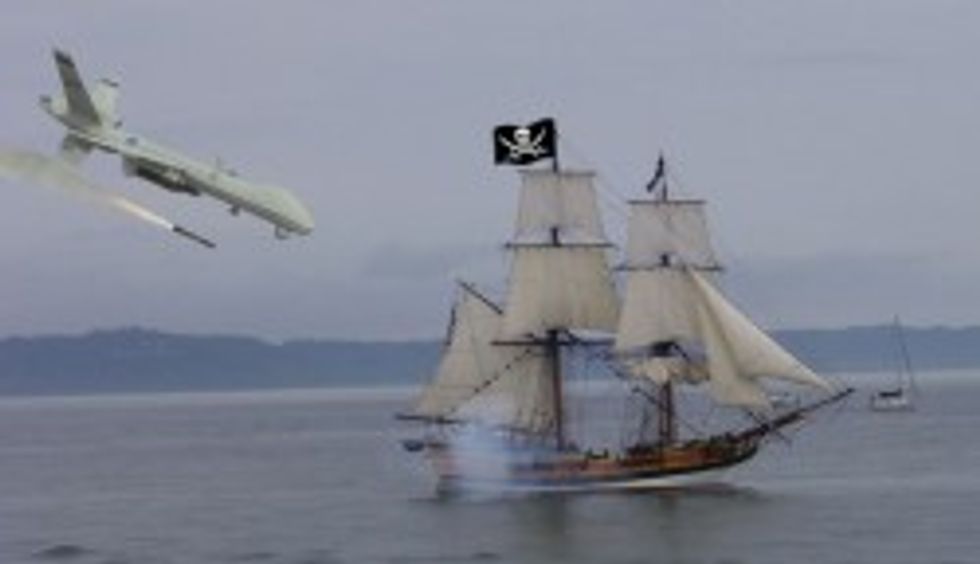 Drones! Or, as they are affectionately called, "Flying Killer Robots!" Apparently they arecoming soon to American airspace and they will fix everything, from pollution in Nebraska to checking out pirates to fighting fires! So what is NOT to like about domestic drones, maybe that's the better question! Except for the tiny little problem of them being completely vulnerable to hacking and hijacking by colleges students, that’s all, just a tiny problem, nothing to worry about.

Via the Daily Mail:

One thousand dollars may not seem like a lot of money, but it was enough for a team of researchers from a Texas college to hack into and hijack a drone on a dare from the U.S. Department of Homeland Security. The scientists led by Professor Todd Humphreys from the University of Texas at Austin Radionavigation Laboratory managed to take control of a small but powerful drone in midair through a technique called spoofing, where a signal from hackers imitates the one sent to the drone’s on-board GPS. The hostile takeover of the unmanned aerial vehicle (UAV) owned by the college was done before the weary [sic] eyes of DHS officials, Fox News reported.

During the experiment conducted at the University of Texas stadium, the small red drone soared into the sky following a clear set of commands entered into its computer. Shortly after, the aircraft suddenly veered to the side, making it obvious that it was no longer following its original orders. Then, the drone hurtled toward the ground as if given a self-destruct command and was saved in the last moment.

Ah, but surely these were super RICH college students, right? Using equipment that cost millions of dollars? (Answer: no, silly, this was done at a PUBLIC SCHOOL in TEXAS so the budget was closer to “a few hundred” than “a few million.”

Humphreys told Fox News that for a few hundreds dollars, his team was able to build the most sophisticated spoofing system yet that tricked the drone into following a new set of commands. Spoofing a GPS receiver on a UAV is just another way of hijacking a plane,’ Humphreys said.

Ok fine. Maybe these were complete geniuses, who for some reason accidentally found themselves enrolled at the University of Texas? No again!

The stadium display was not the first time government officials witnessed spoofing in action.