Study Shows HPV Vaccine Will Not Turn Your Daughters Into Whores 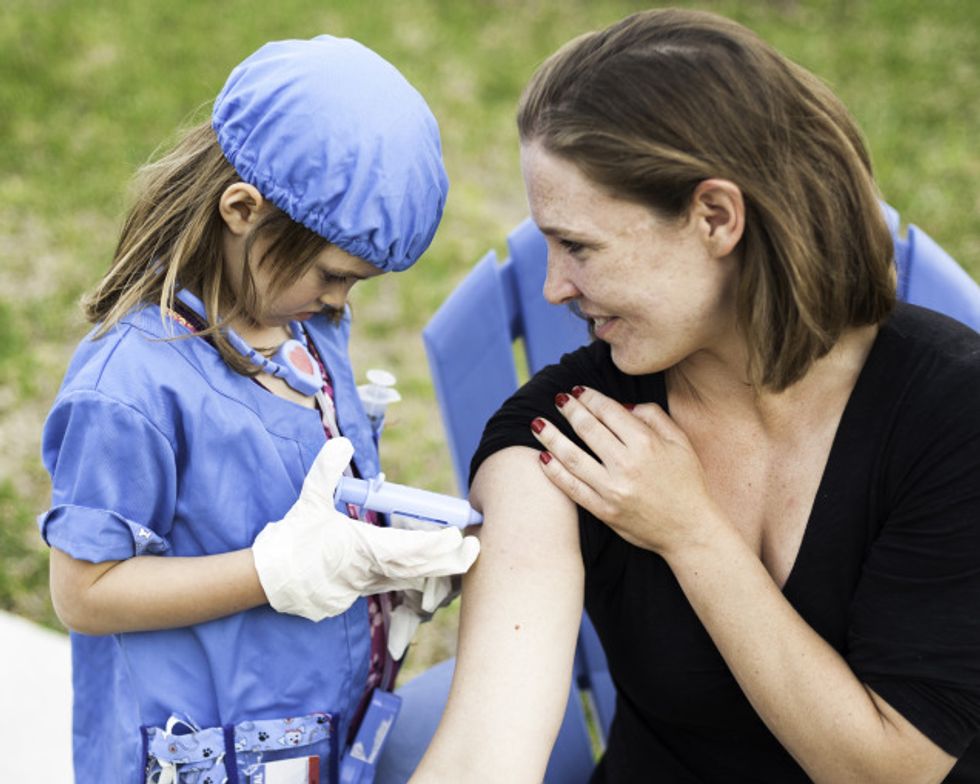 A new obviously fake study published in some bogus "medical" "journal" called the Journal of the American Medical Association or whatever claims that vaccinating girls against the human papillomavirus so they do not get cervical cancer and die from it will not cause them to immediately rush out and do a bunch of unsafe sex and turn into sluts.

This is, of course, UNPOSSIBLE!, since everyone knows that vaccines are bad for you, and protecting girls from sexually transmitted diseases is the world's greatest aphrodisiac. That's just science.

Except that it's not:

The researchers looked at the medical history between 2005 and 2010 of 21,000 girls between the ages of 12 to 18, who had been given the vaccine, and compared them with 180,000 women who did not have the vaccine. The study found that the vaccinated women did not have higher rates of sexually transmitted infections, suggest[ing] they did not have increased rates of unsafe sex.

And yet for some strange reason, even though the HPV vaccine is perfectly safe and a very good way of protecting your daughter from getting a virus that can turn into cancer, only 57 percent of teenage girls have been vaccinated with even one of the three recommended doses. That is so weird. Why would parents not want to vaccinate their daughters so they do not get this easily preventable virus that could turn into cancer?

Dr. Anupam Jena, lead author of the study and a physician at Massachusetts General Hospital, said one likely cause for the low use of vaccine is that many parents and physicians are apprehensive about the possibility that the vaccine could lead to an increase in unsafe sex among teens and young adults.

Any parent who thinks risking cancer is preferable to their daughter doing some sex clearly deserves a Parent of The Century award -- you can cure cancer sometimes, but loss of virginity is FOREVER, right? Good thing Dr. Jena did a study on that to find out it's probably not even true. So parents can feel free to take their daughters to the doctor now and say, "Doctor, please give my daughter all those vaccinations so she does not end up with cancer, please. Thanks." Like they do in other civilized countries where, according to Dr. Jena, 80 to 90 percent of eligible teens are vaccinated because DUH.

But no, we are America, damnit, where we have the right to disagree with science if we believe it's all a bunch of hooey anyway. So in addition to idiot anti-vaxxer parents thinking that measles sure seems like fun, we also have idiot anti-vaxxer parents who think the HPV vaccine will make their daughters sluts and/or cause them, overnight, to "suffer from mental retardation."

Oh yeah, that was now-retired Rep. Michele Bachmann, back in 2011 when she was trying to be the president of the United States. Poor Michele Bachmann couldn't think up a better attack on fellow idiot candidate Gov. Rick Perry than criticizing him for the one intelligent thing he ever did in his life -- which, naturally, he later regretted -- by making HPV vaccination mandatory in Texas. Don't worry: He made up for that by also making it easier for parents to opt out of vaccinating their kids, for basically any dumb reason, a cool trend that has spread across the country to help bring back formerly eradicated diseases, because polio is just so chic and retro.

Anyway, despite warnings from Bachmann and other "not a scientist" types, you can feel free to protect your daughter from ladyparts cancer without worrying that it will simultaneously destroy her brain and her virginity. Or you can just opt out and take your chances, because if measles are marvelous, cervical cancer is probably a real hoot too.