azeroth colleen lachowicz maine pt but not second life because that would be lame thomas h. martin waterville world of warcraft 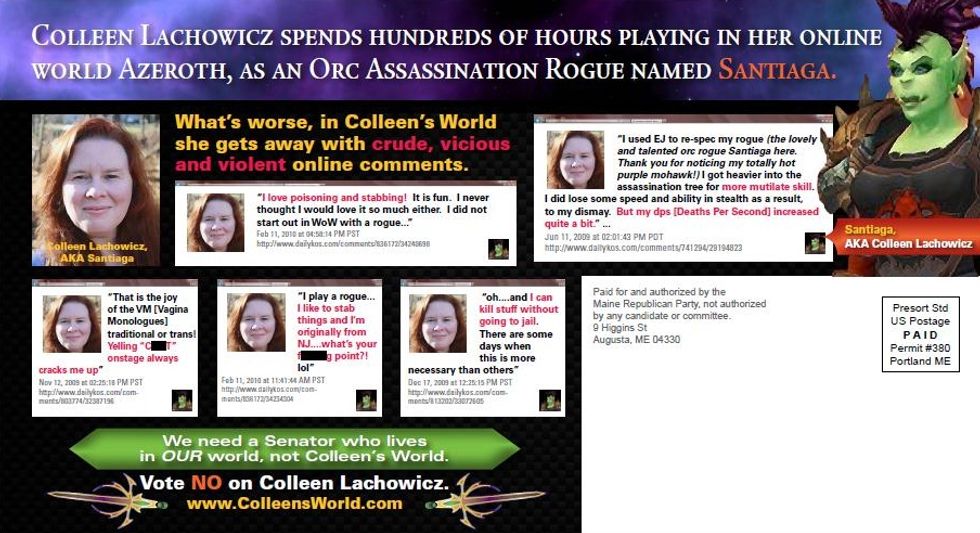 Citizens of Maine State Senate District 25, some grave news today: your Democratic candidate for office... has been on the computer. Possibly every day. Possibly...having a good time.

She plays World of Warcraft, you see. She plays it so good. And you know what THAT means: serious, disturbing sociopathic tendencies, obviously.

From the Maine GOP, which appears to be totally serious:

Colleen Lachowicz, the Democratic candidate for State Senate District 25 (Waterville), has been living a time-consuming double life as a member of the World of Warcraft community. World of Warcraft is an online gaming network where people play a fantasy role-playing game in an imaginary world called “Azeroth.”

OH LORD, she plays a video game? Be still my heart! And to think, we almost elected her to office in the 41st most populous state in These Uniteds. Surely no Maine Republican would stoop so low as to have hobbies.

Whatever could they be? Let us creepily stalk State Sen. Thomas H. Martin Jr. on the Facebok, as he hath done to Colleen. Oooo, lookie here! One of his Facebook likes is "Get Naked." What's that organization into?

Get Naked provides entertainment for those interested in having a good time drinking, dancing and partying the night away.

Well, that is definitely less weird than playing a computer game. In the computer game, Ms. Lachowicz pretends to STAB PEOPLE. Oh, Martin likes "V-Town Paintball" on Facebook too? That's different too. Stabbing people on the internet is way worse than shooting them in real life. We should discuss how she is unfit for office, especially compared to Mr. Get Naked Paintballer, who loves guns so much he wants them on license plates.

But there's more! The sleuths over at the GOP have also discerned that Lachowicz has been posting like a common Communist on -- get ready for it -- Daily Kos. And they have some of her comments, which are vaguely hilarious when taken out of context. Take this one for example:

Now if you'll excuse me, I may have to go and hunt down Grover Norquist and drown HIM in my bath tub.

Whoa whoa whoa. This lady sounds crrraaaazy! She wants to drown people in bathtubs! Even people who have reduced policy discussions to vague, stupid platitudes don't deserve to die in bathtubs! But, surprisingly, this was not the whole comment, which we can find, because the internet is the same for everybody who isn't North Korea.

Now is the time to demand this. The insanity has gone on long enough. Individuals like me and others can not respond like a funded and organized government effort. Now if you'll excuse me, I may have to go and hunt down Grover Norquist and drown HIM in my bath tub.

Oh, man. It's even worse than we thought -- drowning people, and tax reasonableness. Income inequality?! WHO IS THIS MONSTER? We should be doubly irritated, too, that she has the nerve to go online and suggest crazy things like playing video games is more fun than work and how her WoW guild is -- OH NO! -- "progressive." Just look how awful she is:

We're progressive...in fact we joke about being a socialist guild. But the best part is that everyone does their job helping everyone else out. It's not just about the [level] 80s helping each other. It's about all our crafters making items for lower level guildies. Or crafting items and just sticking them in the guild bank for others to use. Or offering to help people out in quests.

You heard it here first, folks! Your Democratic candidate is jokingly an internet socialist, which means she helps disadvantaged gamers when they need it, which is obviously the opposite of America, and we should make a creepy website ("Colleen's World"!) dedicated to her online exploits, to expose her awful imaginary generosity. FOR AMERICA. [Maine GOP]