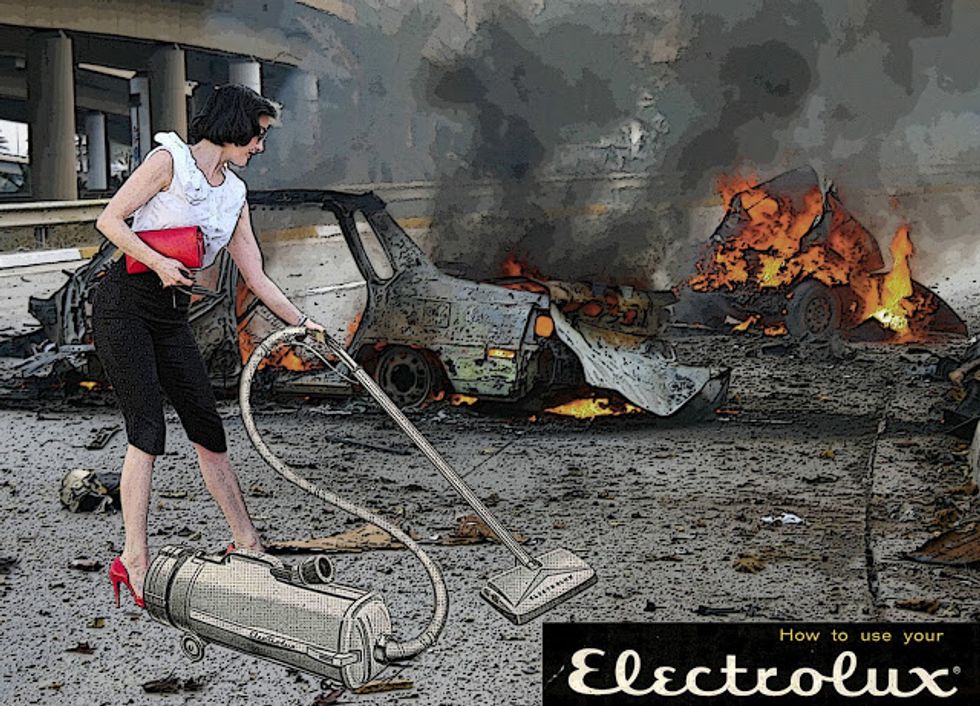 Okay, ladies, why are we castrating The Patriarchy today? We will tell you why. Because Alex Trebek, THAT IS WHY.

The Jeopardy host was not really on our radar before, since he is A MAN so we do not pay attention to him -- and also we do not have a teevee because they are kind of ugly; and also we do not have room in our house for one; and also it is a tool of the patriarchy and perpetuates terrible stereotypes about women; and also there is nothing good on anyway since Buffy ended -- but we saw A Thing on the interwebs, and now we are OUTRAGED!!!

During the game show on Monday night, host Alex Trebek revealed the category “What Women Want.” The generalization already had the program treading in dangerous waters but it really started sinking into trouble with one clue deemed sexist for its reinforcement of gender stereotypes.

Question: “Some help around the house; Would it kill you to get out the Bissell bagless canister one of these every once in a while?”

Sound the Three Ovarian Alarm and send in the Uterine Army of Uteri, because we cannot tolerate this kind of blatant sexist sexism that is so sexist even Matt Lauer knows it, and we all know what a sexist prick he is. In fact, he is still pretty sexist, because he is the only one on set of the Today show not wearing some shade of pink, which proves he is not really an ally, DOESN'T IT?

Still, even HE knew Jeopardy had done a wrong because someone wrote it on his cue cards. "You'd think that somebody would catch that," he said, because he has been taught to catch sexist things ever since he got caught being sexist his own self, LIKE A MAN. (See above re sexist prick.) He did not say why it is wrong -- like maybe how women don't want to do all the housework, but they end up doing all the housework anyway, even when they work harder and make more money than their man husbands or man partners, because we have not had enough decades of feminized sitcoms teaching men to maybe lift a finger every now and then, Jesus Christ. But it's the Today show, so it's not like talking about Real Things is part of the programming.

The "What Women Want" category also included the answers "Levis" and "Pilates," which just goes to show that Jeopardy was subliminally trying to tell women they should do more exercise to conform to heteronormative standards of "beauty" so they can "look good" in their jeans while they are vacuuming. Thanks for being part of the problem, ALEX.

And that is not all! We did the Google and discovered that Trebek has said sexist things before, and we are OUTRAGED!!! about that too:

In Trebek’s universe, when a woman wins, a battle of the sexes begins, whereas when a man wins, the universe is in accord. He’s been making remarks similar to his recent one that women “wager [less] because they figure, ‘Oh, this is the household money, this is the grocery money, the rent money.’”

We assume there are no women working on Trebek's show to tell him that women can actually know stuff and win competitions too, bro, so don't be all "Whoa, how did a lady win when that is unpossible?" Or else they have been so gaslighted that they do not even recognize sexism anymore. But clearly, Trebek needs to take a page from Obama -- who only hires women now even at great risk to our national security, but it is worth it, for the matriarchy -- so he can have someone explain to him that no, ALEX, women do not want vacuums or Pilates or Levis.