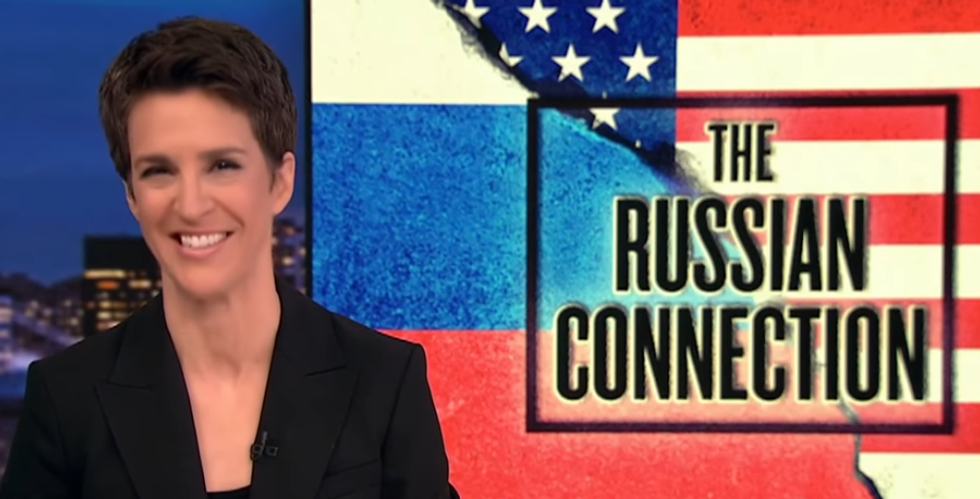 BREAKING JOURNALISM REPORT FROM GLENN GREENWALD'S SHITTY INTERTUBES BLOG SITE! Greenwald, who is BFFs with Julian Assange and has the oddest boner for Russia, runs The Intercept, which has released a very important study that reveals, once and for all, that Rachel Maddow is in the tank for actual journalism. Did you know she spends a lot of time on her TV program covering the Trump Russia scandal? Did you know that, according to Donald Trump and douche-sticks like Glenn Greenwald, the Trump Russia scandal is not even a thing? Why is Maddow so stupid and dumb?

The big scoop, which tries to answer those questions, was not written by Greenwald, but by some guy called Aaron Maté. It was actually published last week, but we guess it took a minute for it to make its away into the wider world of internets, which is lame because Russian intelligence propaganda usually goes way faster than that. Luckily Fox News, which is just at good at journalism as Greenwald is, picked up the story. We sure wouldn't have found it otherwise, because We. Do. Not. Read. The. Intercept.

Anyway, it is very WHOA IF TRUE:

The Intercept conducted a quantitative study of all 28 TRMS episodes in the six-week period between February 20 and March 31. Russia-focused segments accounted for 53 percent of these broadcasts. [...]

TIME WELL SPENT. The report has charts with percentages and everything. Lookie:

Golly! Rachel Maddow sure is talking about Russia a lot these days, according to that chart, or according to literally anyone who watches her show regularly. It's almost like she sees all the mountains of evidence of weird connections between Trump and Russia and wants to report on it, like it might be the political scandal of all our lifetimes. Silly Rachel!

Moreover, what's up with the FBI conducting a massive investigation into this for over a year now, and the Senate Intelligence Committee doing a truly bipartisan investigation, and all our allies handing over intelligence they've picked up of collusion between Team Trump and Russia? Do none of them read important journalism website The Intercept? Do they not understand that when people anonymously leak Trump Russia stories to the Washington Post, that those stories are invalid, whereas when people (Russians) leak things to Greenwald's pals over at WikiLeaks, those are true and good and pure stories?

We are beginning to think a good thing for The Intercept to do would be to open up a summer journalism camp, to teach Rachel Maddow and Wonkette and Mother Jones and the FBI and British intelligence and German intelligence and the CIA and the Washington Post, and everybody else we're forgetting who's investigating and reporting on the alleged "Trump Russia scandal," how to do do stuff better. Obviously they have information none of us is S-M-R-T enough to understand.

They also have #advice for Maddow and the rest of us, about how we should really be talking about how #HillarySux, and Be Nice To Russia, because hey, even if Russia did attack our election, it's not as bad as what America did this one time dot dot dot yadda yadda yadda.

Point being: Keep up the good work, Rachel Maddow, and The Intercept can go get fucked, as per usual.

Wonkette is funded by readers like you! If you appreciate how we report things way better than The Intercept, click the buttons below and fund us!