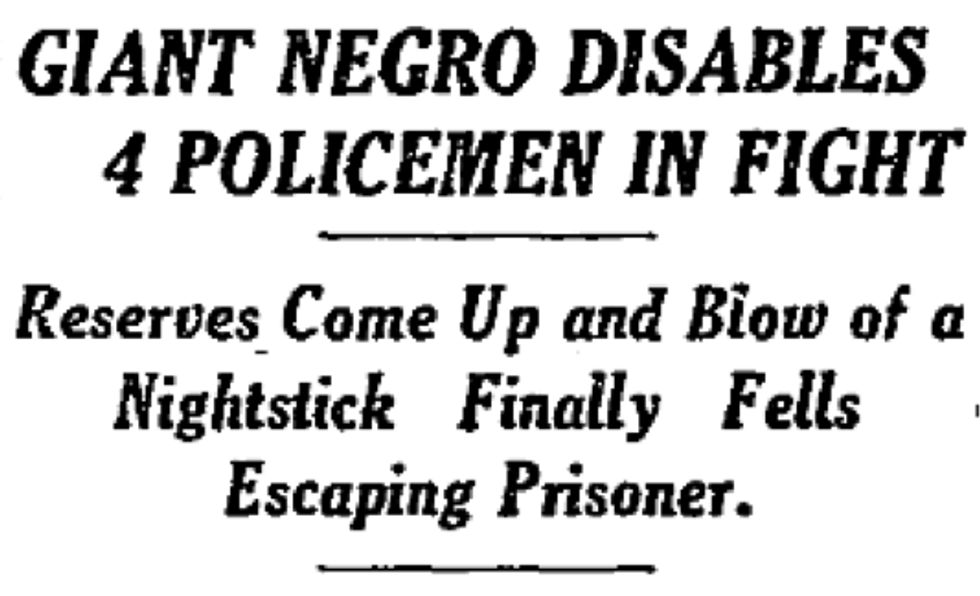 Better be a little more afraid, White People, because The Blacks are on the rampage now, driven into a frenzy of anti-white violence by race hustlers like Al Sharpton and Oprah! Stupidest Man on the Internet Jim Hoftbrings us this breathless lede:

On August 9, 2014, 18 year-old Mike Brown was shot dead by an injured police officer in Ferguson, Missouri after robbing a local convenience store.

On Sunday, Ralph Weens IV, was beaten in West Point, Mississippi. Weens and his friend David Knighten were attacked outside a local restaurant by a black lynch mob.

Ever the consummate perfectionist, Hoft misspelled the name of the beating victim throughout -- the man's name is actually Ralph Weems IV, with an "m," like the parson, not an "n" like the band. So what happened in this clear case of racially motivated violence that can be nothing else but a "MIKE BROWN REVENGE ATTACK"? Says Hoft,

Weens [sic] was with David Knighten, an Afghanistan veteran, who was also severely injured in the attack. The group of around 20 black men were upset about Michael Brown’s shooting death in Ferguson, Missouri. Don’t expect this story to make many national headlines.

According to an AP story, here's exactly what happened, or at least the part of the story that Hoft includes; he appears to have either missed or ignored updates to the story by both the Associated Press and from WCBI.

…David Knighten of West Point told AP earlier by phone that he and Weems had gone to a Waffle House early Saturday. He said a man waved him over outside the restaurant and told him politely that people were upset by the killing of 18-year-old Michael Brown in Ferguson, Missouri, and it wasn’t a safe place for whites. When he went in, he said, Weems was inside and was arguing with other men.

They left after an argument that brought police, Knighten said. He said he showed those officers his .45-caliber handgun and his concealed carry permit.

That was about 1 a.m., according to police, who did not give either man’s name in a press release posted by WCBI-TV (http://bit.ly/YRDPQj ).

On the way to Weems’ house, Knighten said, they went into a Huddle House restaurant with a nearly vacant parking lot.

However, he said, they apparently had been followed by more than 20 people.

Knighten, who said he had served with the Air Force in Afghanistan, said he came out of the restroom to find Weems surrounded. “I was trying to defuse the situation,” he said.

After some shoving, he said, the security guard told everyone to leave.

Knighten said some people blocked him from leaving with Weems. When he got out, he said, Weems was down and people were kicking him. Knighten said others attacked him, adding “I do remember racial slurs being yelled from the crowd.”

Knighten says he has broken bones in his face, a cut over his left eye and a blood clot in his right eye.

Police did not arrive until after the crowd had left, he said.

Police said they were called to the Huddle House about 2 a.m.

The current version of that AP story does not include any of the text after "they apparently had been followed by more than 20 people." Instead, it has this, not noted by Hoft:

"From what we have seen from surveillance video and from what other witnesses say, it doesn't appear it's going to be nearly that many," [West Point police Chief Tim] Brinkley said.

Similarly, the WCBI story has been updated to include this information:

The altercation became physical. Weems and Knighten were beaten. Weems ended up in Tupelo, and Knighten was treated at North Mississippi Medical-West Point.

Police say they’re investigating this as an assault, not a hate crime.

Of course, even that very first press release, which Hoft linked to in his article this morning, included this:

The witnesses described the aggressors as a group of black males but couldn’t provide any other information. The victim of the assault is white. Chief Tim Brinkley said, “This does not appear to be a hate crime. We are investigating this as an aggravated assault. It’s very early in this investigation but thus far the evidence and statements suggest that a verbal altercation turned physical and somebody got hurt.”

So instead of a mob of 20 out-of-control black men randomly wilding on a couple of white guys who were just minding their own business while searching for pancakes, it looks like maybe seven black guys got into an argument with a white guy and then things escalated. Do we know who said what to whom? Not yet -- but New Orleans Times-Picayune editor Jarvis DeBerry published an editorial saying that the story sounds "like some of the legendary hoaxes starring black monsters." The whole story seems a bit fishy to him:

DeBeery was especially skeptical of how the group of "as many as seven men" in the WCBI report grew into a mob of 20 in Knighten's retelling. And then there's the extent of Weems's injuries: according to Weems's brother-in-law, Weems was in a medically induced coma following brain surgery ... but according to the hospital spokeswoman in the same AP story carried by the Times-Picayune, Weems was in "fair" condition. Says DeBeery,

I don't know if that contradicts his relative's report that he had had brain surgery, but if "fair condition" can include a medically induced coma, then the phrase has no real meaning.

On the other hand, we should note that Jarvis DeBeery is both black AND a member of the mainstream media, while Jim Hoft is an independent blogger who just wants his readers to be aware of the extent of Black Thuggery in America, and so it's pretty likely that DeBeery is hiding something. And obviously, Police Chief Brinkley is covering up, too, because he's black as well.

We'll let you know the minute that Jim Hoft decides it's time for all white people to go barricade themselves in their reinforced safe rooms. In the meantime, stock up on your choice of guns and ammo, or popcorn.