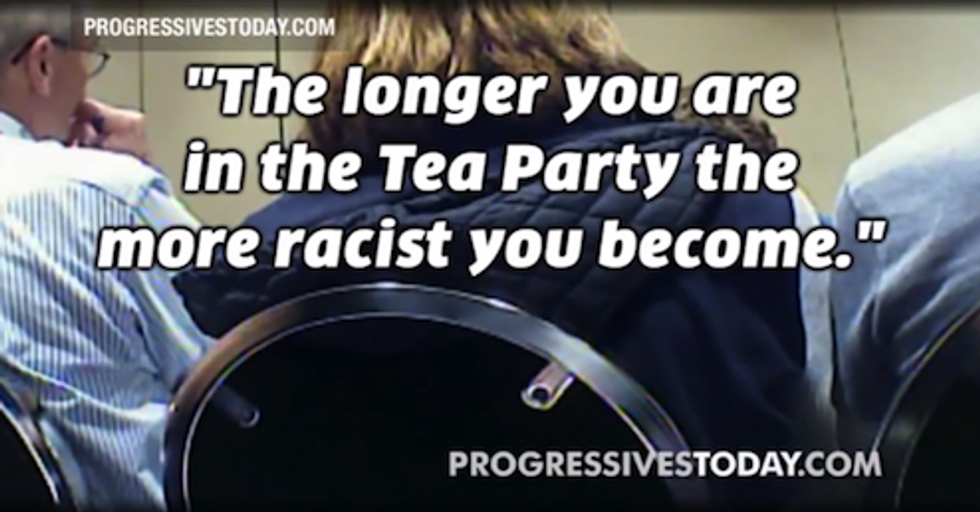 Did you feel it? DID YOU FEEL IT? That wasthe earth moving, baby, and the internet landscape shifting, as Jim Hoft, the Stupidest Man on the Internet, unveiled his new project, which he made with the help of our lord and savior Jesus Christ plus a basic wordpress template, and he has shined his godly flashlight on ... the 15th annual White Privilege Conference, where some speakers said -- and we are ashamed to tell you this -- America was built for white people and the Tea Party is racist.

Burn your Communist Party USA cards, people, we can't be liberal or marxist or socialist or progressive or mildly centrist Democrats anymore, because the left has been TAKEN OVER by very dangerous people who think there is systematic racism in our courts and other institutions and that it is harder to be black than white in this country, and we certainly can't associate with that.

Luckily, Jim Hoft and his Aryan stud partner, Kyle Olson (who judging from the video has aged a bit into a not as Aryan not a stud), very BRAVELY sent BRAVE people undercover to the 15th annual White Privilege conference, where we imagine they got told to check their privilege a LOT. It has pretty much gotten to the point where you can't try on a pair of shoes without someone telling you that only because you are privileged were you able to ignore the racist history of Thom McCan. (Note: to our knowledge there is no racist history to Thom McCan. Which is JUST WHAT WHITEY WOULD SAY!)

So here's their dumb video, which will not shock you.

A lady says Obama is just a black face in the master's house, which is the closest they get to anything that could possibly be construed as offensive, and even then you really have to squint and turn your phone sideways. Mostly they're dismayed that anyone could think America has systemic, entrenched racism, and that the Tea Party is racist, and that these terrible black people (and SO-CALLED and DEFINITELY self-loathing WHITE 'ALLIES') might want to teach your children that in fact slavery wasn't that awesome. They might even have to read The Invisible Backpack. (Except some people are mad that The Invisible Backpack was written by a white woman, because she was "casually appropriating the pain of black people," because sometimes with Critical Race Theory you will always lose no matter what, especially Critical Race Theory as practiced by people on Twitter.)

Anyway, sorry to have been the bearer of Jim Hoft's scoop that will destroy the progressives forever. If you hurry you can still register a comment account at Townhall.