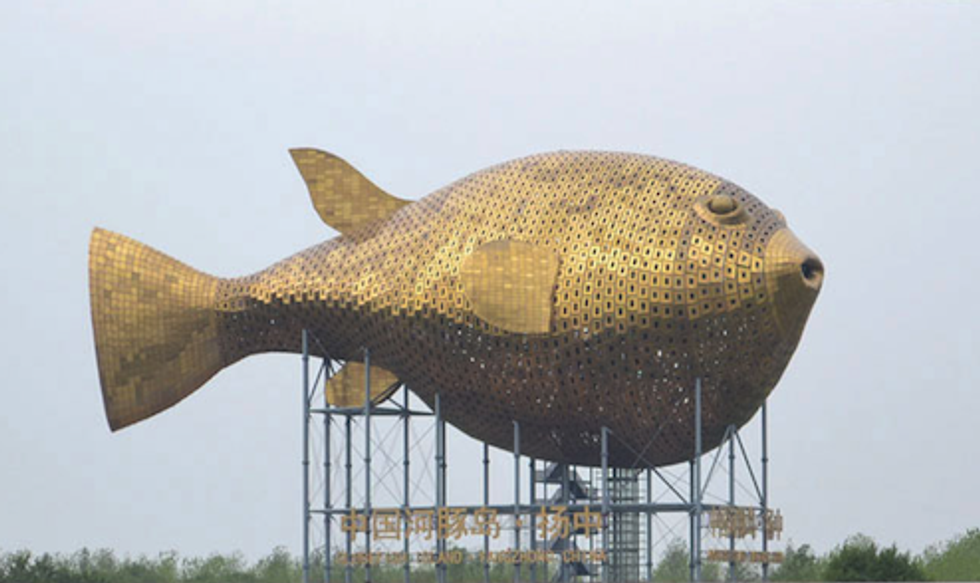 Have you been reading a lot of smart takes, a lot of thinkpieces, about how much the computer-y part of the healthcare roll out sucks, and the gubmint should have magically figured out a way to sign up oodles of people who need to provide oodles of data and done so without any glitches in their website, because that's a totes easy thing to do? Sure you have, but you probably haven't read theNew York Times version yet!

Are you gonna read that article? Nah, because it is pretty much the same old same old. Many problems with the website. Many not enough monies to do this thing right. Many insurance executives having a sad. To all of this, we say: single payer, bitches.

While the NYT is behind the curve on this particular story because the internet has bombarded us with it, we remain eternally grateful for the NYT being the people with the time and resources to write stories about the incredibly expensive giant puffer fish in China:

Chinese Communist Party leaders’ vows of a new era of humble austerity in government may have met their most exotic adversary yet: an $11 million, 2,300-ton, 295-foot-long puffer fish.

The brass-clad statue, which shimmers golden in the sunlight and switches into a garish light show at night, was built by the city of Yangzhong, in Jiangsu Province in eastern China, to lure visitors to a monthlong gardening expo that opened in September. The “puffer fish tower” has an elevator to take visitors up the equivalent of 15 stories into the sculpture’s belly to view the lush scenery near the Yangtze River.

You guys, that sounds AMAZING. Also, too, China appears to have this quirky public art thing on lock:

Critics berated a county in Guizhou Province for building “the world’s biggest teapot,” a 243-foot-high teapot-shaped tower, complete with spout, that was part of a $13 million project.[...] Zhengzhou, the capital of Henan Province, is also home to a sculpture of two pigs in a frolicking embrace. From certain angles, the pigs might appear to be mating.

Are you a young-ish lady-ish person? Do you have a job? Do you want a job? If so, the NYT has you covered with a pile of reader submissions that would like to explain to you how not to suck at your job, ladies. Among the suggestions:

Helpful! Thankfully, yr Wonkette writers are already hardened not-whiners because the Editrix frowns on such behavior, and we are already one giant smile-having brand, if "swearing on the internet" can be considered a brand.

Sunday Styles has a profile of someone who has actually built a personal brand that we do not hate even a little bit: Project Runway's Tim Gunn. Tim Gunn is a perfectly appropriate person to put in Sunday Styles, what with being the fashion person and all, instead of the weird thing where famous women doing important things like becoming ambassador to Japan get relegated to Styles, because ladies.

Good lord, have we made it this far into this week's NYT without being reminded that we are the poors and holy god it must be awesome to be rich? Our bad. Here you go:

For years, rich and famous guests ranging from Bill Gates to Mariah Carey have been renting out the Great House on Necker Island, Richard Branson’s private enclave in the Virgin Islands. But in August of 2011, it burned down. (Kate Winslet famously helped rescue Branson’s mother from the inferno.) Now, two years later, a bigger, better version is complete but for the finishing touches. Pictured here for the first time, the mansion, which goes for $60,000 a night, was built with the original in mind. “We didn’t want to lose the magic of the old house, but we wanted to do some magical new things,” Branson said. “It’s like the old house on steroids.” Now visitors will be able to stargaze from a hot tub situated on the tippy top of the house or take a zip line straight to the beach.

Yep, you read that right. To stay in this thing one night will cost you a year's salary, give or take, if you are a regular person. Also, you will never take a zip line from your hotel to the beach. Also, too, Kate Winslet is a bawse. An insanely rich bawse.

In a much needed respite, (for us, not him) Thomas Friedman has the week off. Small blessings. He probably had trouble imagining a garrulous and smart-yet-earthy cab driver that knew all about healthcare AND geopolitics and happened to be shuttling Thomas Friedman around.

Maureen Dowd is here, though, winning dual honors for "Column With The Most Misleading Headline" and "Column That Is Most Difficult To Follow." The headline -- "A Mad Tea Party" -- leads us to believe that we're about to read an indictment of the Tea Party and the fact that our government is being held hostage by a few capricious children. Dowd starts out that way, and tells us that Cruz and his ilk are bad. Really bad! So bad that they might make us long for the George W. regime, except we shouldn't, or maybe we should? Here's a flow chart of the tortured progress of this incomprehensible column:

Cruz bad--->makes us long for Cheney--->shouldn't long for Cheney because there was just a roast for Cheney, complete with jokes about war crimes--->there's going to be a Rumsfeld movie directed by Errol Morris.

Asked the lesson of Vietnam — Rumsfeld was the chief of staff to Gerald Ford when Saigon was evacuated — Rumsfeld briskly replies: “Some things work out, some things don’t. That didn’t.”

When Morris presses Rumsfeld about the Justice Department’s “torture memos,” the former defense chief said they did not come out of “the Bush administration, per se; they came out of the U.S. Department of Justice.” That parsing would be beyond Bill Clinton.

About the memos that led to what Morris considers “one of the great stains in American history,” Rumsfeld says he never read them. When asked why, he replies, “I’m not a lawyer. What would I know?”

When Morris asks Rumsfeld about the “confusion” that linked Saddam to 9/11, he answers brightly, “I don’t think the American people were confused about that,” adding, “I don’t remember anyone in the Bush administration saying anything like that, nor do I recall anyone believing that.”

We cannot wait to hate-watch this Morris movie and play one of our favorite games from 10 years ago. We like to call it "Rumsfeld: Deluded or Deceptive or Both?"

Also here to bash the Tea Party is Ross Douthat, who is having one of his periodic faux-bipartisan episodes where he is sad about the GOP, mainly because they are not getting any political traction out of behaving like children about the shutdown. It has only just occurred to the illustrious Mr. Douthat that these people are fucking nihilists:

“THEY told me,” Martin Sheen’s Willard says to Marlon Brando’s Kurtz in “Apocalypse Now,” at the end of a long journey up the river, “that you had gone totally insane, and that your methods were unsound.”

And Willard — filthy, hollow-eyed, stunned by what he’s seen — replies: “I don’t see any method at all, sir.”

This is basically how reasonable people should feel about the recent conduct of the House Republicans.

We do feel that way, Ross, but we have felt that way for YEARS. However, we do not spend our time imagining perfect Republicans who somehow line up exactly with our policy goals and are super-rational actors:

Republicans need to seek a kind of integration, which embraces the positive aspects of the new populism — its hostility to K Street and Wall Street, its relative openness to policy innovation, its desire to speak on behalf of Middle America and the middle class — while tempering its Kurtzian streak with prudence, realism, and savoir-faire.

1) Ross Douthat, he of the chin protector goatee, would not know savoir-faire if it bit him on the dick. We're not even sure what he means by that term in this sentence.

2) Ross, baby, those people do not actually exist! You sold your party out to religious zealots and the absurdly rich, and in the words of the inimitable Molly Ivins, you got to dance with them what brung ya.

Douthat being Douthat, he also has to veer off into an inexorably long explanation about how both sides do it and Michael Moore is just like Louie Gohmert and Bamz only succeeded because he held back the crazy left wingers who thought maybe it might be cool not to bomb the ever living shit out of people or basically just kill the poors. Exactly the same!