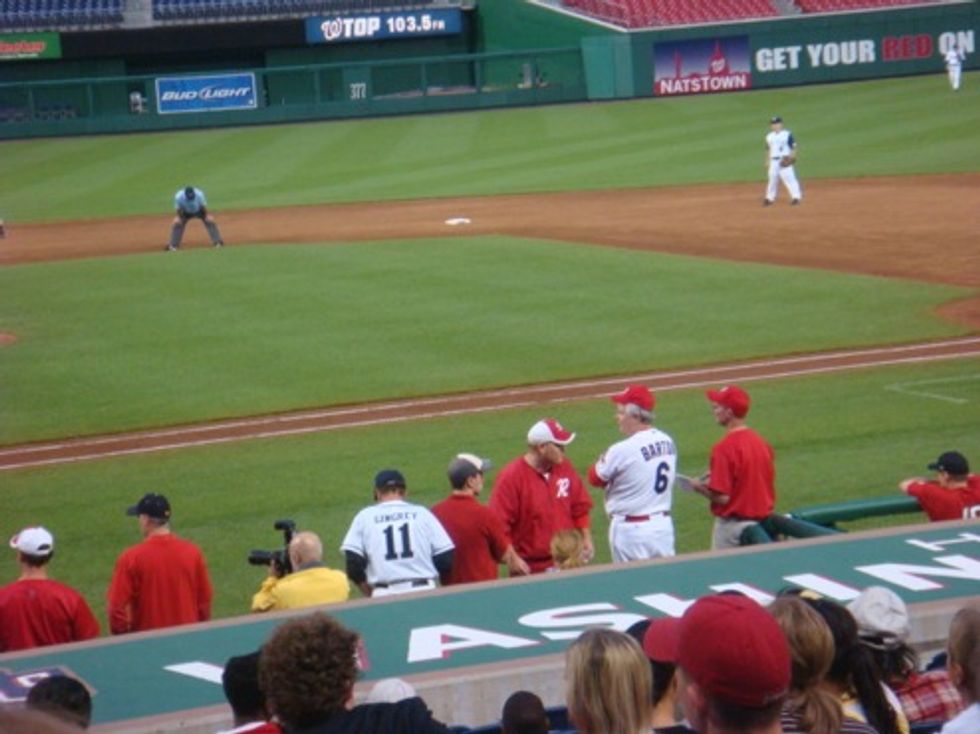 You didn't think we'd forgotten the baseball post, did you? Never! Our full coverage of last week's annual Roll Call Congressional Baseball Game was always destined to come on Sunday, because Sunday is a day for watching baseball after Church. This was always the plan. Always. Always time infinity. (Lies.) So let's take a photo tour of Republicans vs. Democrats playing a sport, terribly, in their tights (YES, THAT MEANS JOE BARTON) at Nationals Stadium. Up top: escaped Uighurs from New Jersey sneak into the field!

There weren't too many Wonkette Characters playing roles, because Wonkette Characters are fat and hate fun. That didn't stop Texas' smart science scientist Joe Barton from playing though! (Just kidding, he was only the manager.) That's Opossum Joe farthest to the left, cheering on #11 Phil Gingrey, who only got Rush Limbaugh to sign his permission slip to play at the very last minute.

Joe Barton: no ass. Would it help or hinder his team?

Smart hero baller Eric Cantor was there, oh boy. He mostly meandered by the vendors eating junk food. He had no interest in watching this sports battle and only came because his staffers told him it was a Britney Spears concert. He had several terrifying security men surrounding him (who does he think he is, John Boehner or someone else important?), which is our excuse for the camera's unsteadiness, or at least the one we're running with.

The stadium was split into sides, for Democrats and Republicans. We sat on the Republican side hoping to eavesdrop on conversations and pick up hilarious racism. Unfortunately the ONLY black people on that side (maybe) were in a group sitting directly next to us. We hoped the two black people would take a bathroom break together or something, in Solidarity, allowing their white friends to tell the hot new n***** jokes for a few minutes. Never happened, although they did say at one point, "Did you read about that Liz person's emails??"

Later, we would find out that this group was sitting on the wrong side.

Hey, you're not the "real" Duncan Hunter at all! You're probably his son and we could just take three seconds to google that and get "information," but we're not going to, and that's your fault for not adding a "junior" or whatever to your name.

A hobbit, everyone! Does the hobbit know the rules? (That is actually freshman Democratic Rep. Frank Kratovil of Maryland.) No one ever called security to get the hobbit off the field, either. We just *allow* these threatening monsters to play along now, in our liberal dungaree-wearing society.

Joe Barton makes a pitching change, or at least goes to "calm down" whichever loser was on the Hill. He took it very seriously, much like he does the destruction of the Earth from high temperature in like 20 years.

(Oh, if you were interested in who won this clown battle, it was 15-10 Democrats, their first win in eight years, which is symbolic and junk. Now, back to the nonsense.)

Intern Riley chases after orange mascot John Boehner, who had just turned down a photo request with him, like a penis. And since this is the closest thing to a "crowd shot" we have, let's talk attendance. Just by looking, your editor determined it to be around 2,500. Intern Riley was adamant that the figure was closer to 1,500 so we fired him. Either way it was more than all Nationals games this season, combined.

Here's the Democratic side of things. Which famous Democrats played, you ask. Anthony Weiner and failed former Washington professional athlete Heath Shuler, is the best we can offer. Neat.

THE DEMOCRATS WERE SO INTO IT, on the Democratic side! This made them infinitely more annoying than the Republicans, who were just trying to get through the day, as usual. Not even joking, these Dem staffers broke into MANY loud, smug group chants of "Yes We Can," when they weren't heckling "EAAAARRRRMAAARRRKS" instead. Jesus.

Intern Riley was about ten-sheets-to-the-wind by the sixth inning and was determined to get anyone to autograph his Oscar Wilde action figure box. (Not making up absurdities here, either.) The Dems were too busy "celebrating" though. But who cares -- why waste a great comedic autograph opportunity on Frank Kratovil or some other bore? There will be other Wonkette crashes, later, with wackier frauds, in wackier times...