Sundays With Jamie Kilstein And The Lord: Why Isn't Adam Carolla Funny? 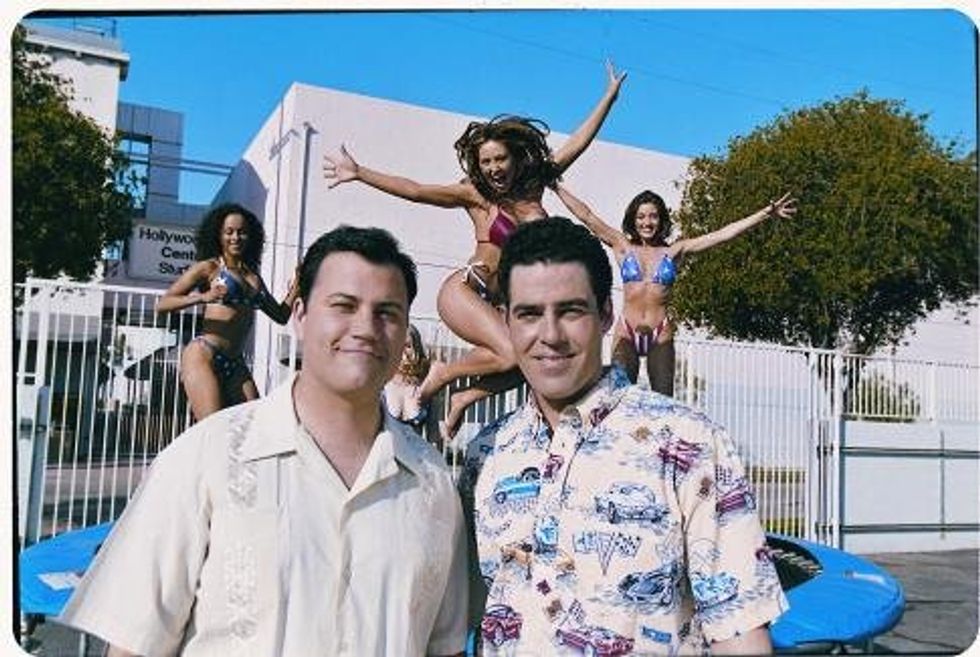 If you have ever thought to yourself, “Boy, I sure wish I knew what the old guy who used to watch girls bounce on trampolines, while trying to slur out a coherent sentence, and who I assumed was dead, thinks about women” then you are in luck! Adam Carolla is alive and well and saying words in public again!

I was not going to write about this because no one wants to pay attention to a sexist, or keep the awful narrative of “are women funny??” in our smoggy ether, but the reactions I got from my liberal followers on Twitter and Facebook were horrifying enough to warrant a column.

For those who do not know what was said because you were Googling important events like “Trayvon Martin case updates” or “Supreme Court decision on health care” or “Mubarak….Zombie?” instead of typing, “MAN SHOW RULES TITS A/S/L INTERCOURSE!! FULL FRONTAL NO HAIRY BUSH”, here is what happened:

Old Man Loveline was asked if he thought women were funny by, weirdly enough, beacon of upstanding journalism The New York Post and his brain let him say:

“[Chicks are] always the least funny on the writing staff. The reason why you know more funny dudes than funny chicks is that dudes are funnier than chicks.”

Well, with data like that looks like I won’t need to kill myself for being the same gender as scientist Adam Carolla! Thanks Mr. Math!

Clearly, we know this isn’t true. There are incredibly funny women out there and God fucking awful male comedians. When you were at the comedy club and saw your 18th rape joke, followed by humping the stool or pretending the mic stand was a big cock, were you aware that comic was not a lady?! According to Adam Science, funny words only come from all that backed up semen you have from not getting fucked.

What upset me so much is when I posted that Adam is a sexist fuckhole, I started to get responses from a litany of white dudes who felt that their hero was being oppressed by my words. Thank God for Twitter! Without it, I would not have seen the pale hordes come to defend such an oppressed minority: a rich white male.

Why, I remember when the Adam Carollas of the world had to march to obtain the right to vote, fight for equal pay (a struggle which started after the cancelation of The Man Show and continues today), and Adams everywhere are still fighting for full abortion rights in many states!

The fact that dudes on Twitter would rather shit on women than bear criticism of someone whose podcast they like baffles me. These are the same people making sure to “@” Adam on Twitter, thinking maybe they will become friends! Who wouldn’t want to be friends with a lonely sack of shit desperately prying open the door to star-fucking?!

A so-called fan of mine even pointed out that me going after religion in my standup, like here on Showtime is the same as “What’s up with Broads??” Adam Carolla taking a dump on women’s faces. One of the many problems with that comparison is that in my rant I am slamming religious bigots: the ones who try to restrict the rights of LGBT kids and in some cases drive them to suicide. I’m not, say, going after a group of people who are just trying to get work in a male-dominated business.

I don’t recall the organization of women comics trying to restrict people’s right to marry. Nor do I remember the Betty White child-fucking epidemic. The worst part? Instead of putting her in jail, I hear they just secretly moved her to another sitcom.

In fact, a comment like that from a religious person just reminds me that the church (not all religious people) HATES WOMEN AS WELL!

When making a “brave” stance as a public figure, the rule should be to only go after the oppressors. I’m not saying that women are always victims or damsels in distress, but many do get turned down for late night spots, and writing gigs, for another white dude with a hipster beard. So maybe people with the chance to voice their opinion shouldn’t spew fabrications to make it even harder for them.

If you are going to do that, don’t pretend to be edgy, or controversial. You’re just another boring old dude.

Jamie Kilstein has not yet challenged Adam Carolla to a fight. Listen to his podcast with Allison Kilkenny here.