Sundays With The Christianists: A Biology Textbook For A Very Young Earth 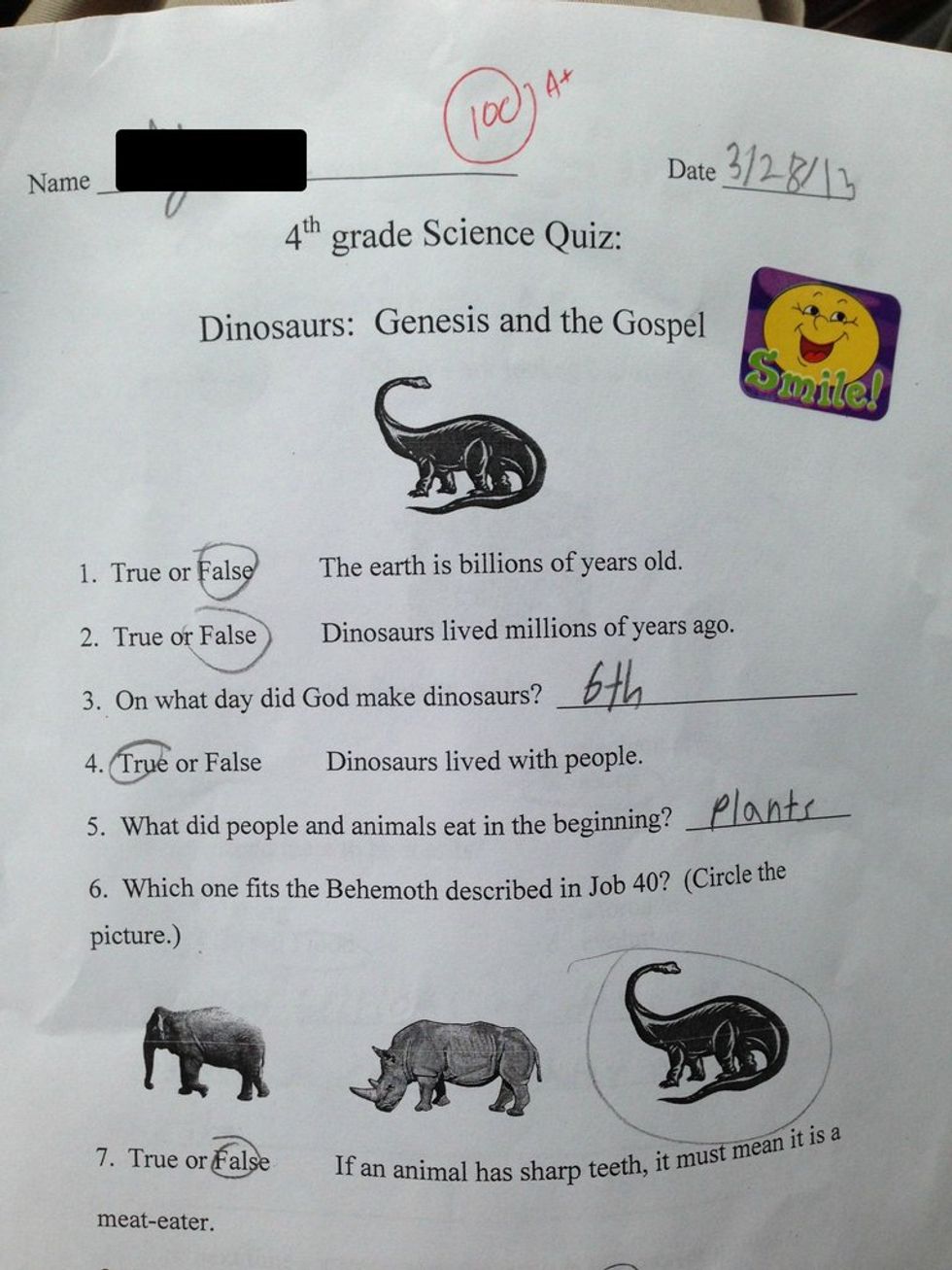 Greetings, Science buffs! Get some pants on already! And maybe some hip boots, because we're going to continue wading through our tenth-grade textbook from Bob Jones University Press,Biology For Christian Schools by William "Pinkie Pie" Pinkston. Last time, we learned how evolutionary theory fits into Satan's plot to make Man reject God's Word. This week, we'll be looking at some of the completely evidence-based science facts about how Earth was created in six days, and how there was literally no such thing as rain before Noah's Flood.

To start with, Pinkston would like to serve a healthy dose of STFU to you heathens who think that the sequence of events in Genesis 1 and 2 is "scientifically impossible." But if you just give it some thought, problem solved!

See? There was light, and it's only your limited human understanding of Bible Science that makes you think it had to come from something. Pinkston leaves aside the question of what exactly the earth was orbiting until the Sun was created on Day 4, because shut up, Satan, is why.

Also, we need to remember that we are talking about God Almighty here, so trivial questions about gravity and all that don't actually start to matter until He was finished with Creation Week. Same thing for why He didn't just make it all at once and be done with it:

Creation is in itself scientifically unexplainable. Knowing why or how God created things the way He did is not only beyond the scope of science (for it cannot be observed) but also beyond the comprehension of human minds (Job 38-40:5).

Now, just as he has to explain that people who think maybe Genesis is allegorical are Bad Christians (remember -- "The Bible is accurate in everything, or it may as well be accurate in nothing"), Pinkston also has to get rid of Christians who try to use the Bible itself to allow for evolution:

Some Christians interpret the seven days in Genesis 1 as seven ages. This interpretation is sometimes called the long-day theory (day-age theory). Second Peter 3:8 ("One day is with the Lord as a thousand years, and a thousand years as one day') is often cited as support for the long day theory. This passage, however, simply teaches that God is eternal and timeless.

Most people who hold to the long-day theory are attempting to put enough time in the Genesis account of creation for evolution to take place. This is an attempt to prove that God directed or permitted the evolution of the universe rather than actually created it as He did. If God says He created the world in six days and man refuses to believe it, then man is calling God a liar.

See! He said "theory." It's science! And easily-refuted BAD science at that, because "one day is as a thousand years" is clearly a metaphor and six days of creation is literal reality. Besides, the plants of Day 3 couldn't wait a thousand years for God to organize light into the sun on Day 4, or thousands more years for pollinators to be created. That's just science.

Pinkston also devotes a fair chunk of text to the "gap theory," which posits, scientifically, that

there was a long period of time between Genesis 1:1 and 1:2... Gap theorists believe there was a "first creation" which was destroyed, probably (they say) by the fall of Satan described in Isaiah 14:12-17. This period ("first creation" and "gap") may have been thousands, millions, or even billions of years long.

Pinkston is not crazy about this Gap theory, mostly because it looks like an attempt to sneak in some evolving. He seems much more comfortable with Banana Republic theory instead.

The bestest idea of all in this chapter, one for which there is just oodles of evidence (in the Bible at least), is the "canopy theory," which we read aloud to Kid Zoom, causing him to stare balefully in our general direction and say this. To really do this sucker justice, we have little choice but to inflict a longish blockquote upon you.

The Bible tells very little of the antediluvian (before the Flood) earth. However, it was similar to the earth in which we now live. There were seas, rivers, and mountains (Gen. 1:10, 2:10, 7:20), as well as animal and plant life, before the Noahic Flood.

One of the major differences mentioned in Scripture and implied by scientific evidence is the existence of a layer of water vapor around the antediluvian earth. Genesis 1:6-8; 7:11; 8:2 and II Peter 3:5-6 attest to this God-created canopy of water above the earth. The water vapor composing this layer would probably have been considerably higher and more abundant than the water vapor now in our clouds.

This canopy of water is believed to have fallen when "the windows of heaven were opened" (Gen. 7:11) at the time of Noah’s Flood. The layer of water vapor must have been a transparent layer, not obscuring the sun, moon, and stars but probably affecting the radiation of the sun on the earth.

Let's just repeat that, shall we? This sentence is being taught as science: "Many Bible scholars agree that there was no rainfall before the Flood, plants being watered by mist which rose from the earth." (Also, as we'll see next week, T-Rex was a vegetarian in the Garden of Eden.) Kinda makes you wonder why kids who went to high schools using this book were required to take an extra year of science by the University of California system.

Is there a diagram of this canopy? Of course there is! It's a Scientific Diagram!

Pretty hard to argue with a professional Science Illustration like that!

In addition, the humid earth that would maybe result from this canopy (and all that mist, you know) would be ideal for humans and dinosaurs to live together, and would explain the abundance of swampy-type vegetation in the fossil record. Sure would have sucked to be a desert-adapted organism back then!

In a side box, Biology For Christian Schools notes other "evidence" of the canopy theory, drawn, of course, from the Bible. The first rainbow only appeared after the Flood, of course, and so an invisible layer of water above the atmosphere "could help account for the absence of rainbows before the Flood."* Also, too, the canopy theory provides a very scientific explanation for another totally factual thing in the Old Testament:

The average human life span before the Flood (based on Genesis) was 912 yr. After Noah the life span quickly dropped to about 400 yr. and continued to decline. Abraham, Isaac, and Jacob lived well over 100 yr., but few men after their time have reached even 100 yr. Many Bible scholars consider this decrease in life span to be a result of sin. A cause for this decrease could be the loss of the filtering effect of the canopy resulting in direct exposure to solar radiation.

Solar radiation, fuckers! That's some science! Also, it's pretty obvious that a lot of what is now the sea floor was dry land, and that the oceans got a lot deeper when God collapsed the sky canopy and caused the Flood:

The shelves of land around the continents, as well as many mountains in the sea, appear to have been dry land at one time. They would have been above sea level before the Flood with the large quantity of water believed to have composed the canopy now on the earth.

This would explain why modern science has found so many drowned Bronze-Age villages on the continental shelves! And if they haven't been found, there's probably a good explanation for that, too, because God.

In keeping with the book's overarching theme that only directly-observed phenomena and the Bible are accurate, the section on "canopy theory" closes with a word of caution:

The existence of water above the antediluvian earth is a Biblical fact, but the idea of a water vapor canopy and its effects is theory. Differences between the antediluvian and the postdiluvian worlds can be explained by the canopy theory. In harmony with Scripture and many observable features of our current world, many Christians consider it a good theory.

So the facts are that there was definitely some kind of enormous reservoir of water above the earth, enough to result in a worldwide flood. Now all we need to do is make up a story to explain how it happened! Science rocks!

It really is a testament to the inventiveness of the human mind to see the lengths to which these people will go to try and make a book of bronze-age legends seem even slightly plausible. Sadly, it turns out that even among creationists, the canopy "theory" is so laughable that one creationist website suggests avoiding it altogether, while even the most influential bunch of loons, Answers in Genesis, finds it problematic. Needless to say, real scientists point out it's kind of impossible, but they're all going to hell anyway.

* We would also note that this model may be consistent with My Little Pony: Friendship is Magic, in which the weather is controlled by Rainbow Dash and her pegasus comrades. We have made a small adjustment to an illustration from the textbook to show how that works:

Next week: How Noah's Ark is a perfectly reasonable Science Fact

Join Doktor Zoom for the Wonkette Book Club! This month's selection is Rachel Maddow's Drift: The Unmooring of American Military Power, which just came out in paperback! ($11.95) Or there's the Kindle e-book for $11.99. Purchase it with those linkies, there, so Yr Wonket gets a cut!