Sundays With the Christianists: A 'World History' Textbook That Annexes The Sudetenland 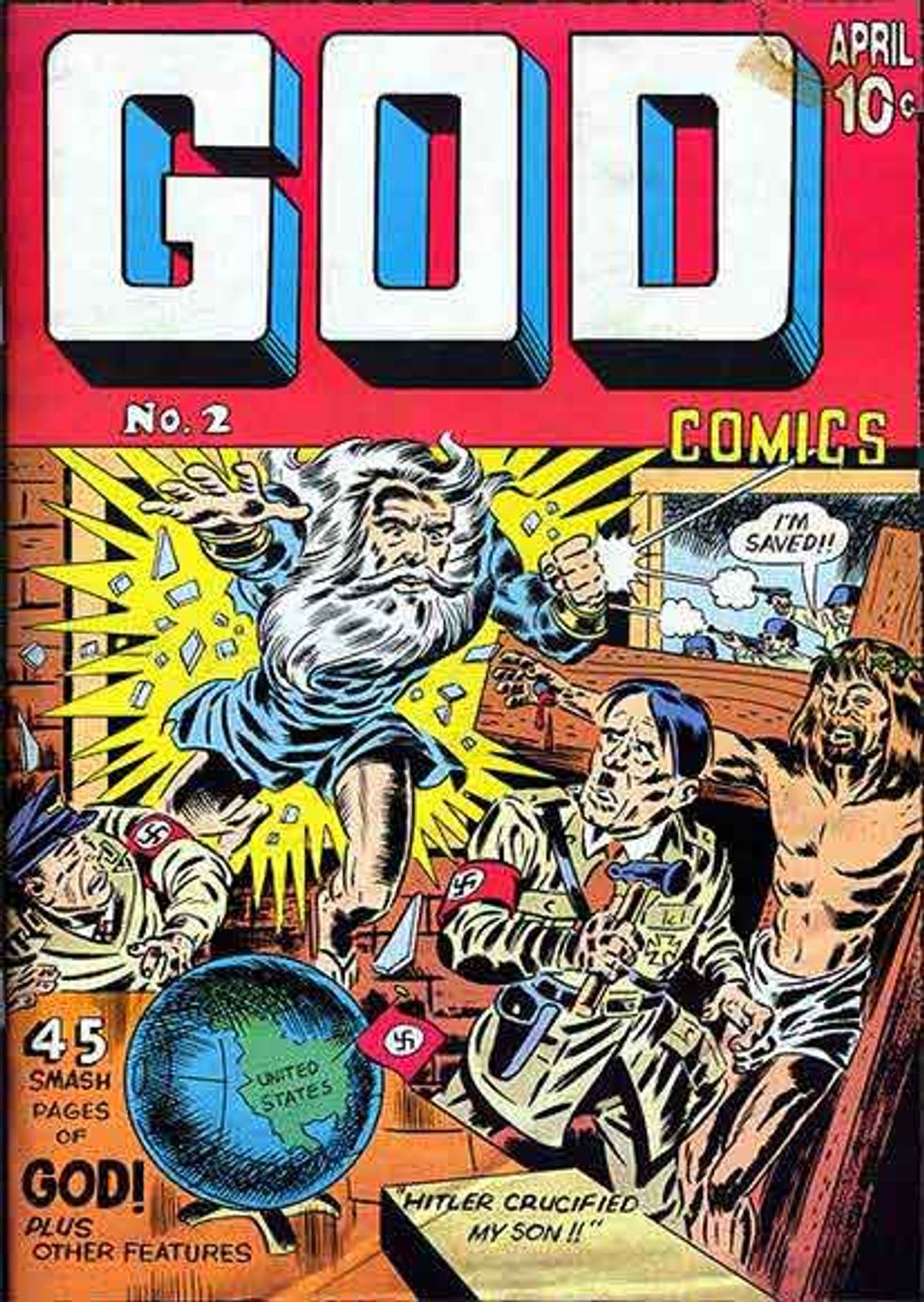 This is another weird chapter in our fundamentalist textbook for 10th graders,World History and Cultures in Christian Perspective. Where much of the book emphasizes how the world has gone wrong by abandoning God, theological matters are almost wholly absent from the chapter on World War II. The editors don't even say that God wanted America to win! For the most part, World History gives us a chronological account of WW II that's very similar to what you might find in a secular textbook. Except, you know, for the parts about how Germans' acceptance of the theory of evolution made Hitler inevitable.

One thing that surprised us a little was seeing Hitler and Mussolini described as "socialists" -- it feels like that meme was invented by Glenn Beck and company in 2009. Sure, we already kind of knew that's not the case (it goes back at least as far as the John Birch Society), but it's nonetheless a bit surprising to see it in a textbook whose first edition was published in 1985. And so "fascism" is defined as

a form of socialism that is similar to Communism; it exercises totalitarian control of political, economic, cultural, religious, and social activities. Fascism is also like Communism in that it follows Darwinian ideas in its attempts to change society and bring in a new social order.

Similarly, we read that "the socialist Adolf Hitler" duped Germans into supporting him, and that Nazism

"is a form of socialism, but it relies more heavily on terrorist aggression, fanatical racism, and antidemocratic nationalism."

Needless to say, we don't get any real discussion on the economy of Nazi Germany, where privately-owned companies did rather well, as long as they weren't privately owned by Jews. Or actual Socialists. We are also told that in Mein Kampf, Hitler

combined Darwinism with his socialist ideas, proclaiming that the Germans had evolved into a superior or "master race" and were destined to rule the world. To assure the "survival of the fittest," he called for the elimination of certain "inferior" races (especially the Jews, for whom he had an intense personal hatred).

Of course, Hitler's writings never actually mention Darwin, and his racial theories had more to do with Herbert Spencer's "social Darwinism" than with evolutionary theory, a distinction that the editors happily ignore. The chapter's most thuddingly insane claim may be that

Because many Germans believed in evolution and other liberal philosophies, they accepted Hitler’s ideas and soon elected Nazi candidates to the Reichstag, Germany’s chief legislative body.

Sure. Why not? Let's follow this up with another oversimplification: according to World History, Hitler's racial policies were exactly like what is going on in the Democrat Party today:

To eliminate other "undesirables," Germany’s public hospitals began to practice euthanasia (killing off the weak, the sick, the mentally retarded, and others with physical disabilities) and abortion (killing unborn babies).

Well, no. Actually, while the Nazis encouraged "inferior" Eastern European women to have abortions, abortions were strictly forbidden for "Aryan" women, which is why, of course, Planned Parenthood is trying to genocide all the black fetuses today.

So after this, the writing apparently gets turned over to a separate team which focuses on the actual political and military run-up to WW II. Strangely, they don't associate the rise of a miltarist dictatorship in Japan with evolution or abortion.

In fact, most of the discussion of the war is pretty conventional, with occasionally weird Reagan-era inflections like this description of the Spanish Civil War:

One side, led by General Francisco Franco (1892-1975), fought to keep Spain from falling into the hands of the Communist forces who fought for the other side. Unable to get help from the League of Nations, Franco was forced to turn to Germany and Italy for weapons and reinforcements, while the Communists and other socialists he fought received aid from the Soviet Union.

No mention, of course, of the coup by Franco and the army that sparked the war, the fascist policies of his government, or the important fact that Generalissimo Franco is still dead.

Along similar lines, the fact that the United States and Britain actually provided aid to the USSR in its fight against the Nazis is seen as shortsighted at best, morally indefensible at worst:

The Allies, especially the United States, sent billions of dollars’ worth of weapons and other supplies to the Soviet Union daring the course ofthe war, enabling the Communists to drive the Nazis out of Russia. (Although the Russians were just as guilty as the Germans regarding the invasion of Poland.) Unfortunately this aid would also help Stalin enslave Eastern Europe and threaten the freedom of many nations after the war.

This may be the only textbook we've seen where "The Allies" is framed as a group that somehow didn't actually include the USSR. The text also notes with astonishment that at the first session of the Nuremberg Trials,

a Russian member of the tribunal responsible for the trials was chosen president, even though the Soviets had committed innumerable war crimes of their own.

The "most shocking fact that emerged" at Nuremberg, of course, was that

many German people -- not just a few fanatical "racists" -- had witnessed the Nazis' brutality and oppression and had given their tacit approval. This fact demonstrates the spiritual and moral bankruptcy of a nation that accepts the teachings of Darwinism, humanism, and socialism.

We were only mildly surprised when, in the very next paragraph, the editors actually found a dead horse and began beating it.

We'll close with a bit of dumbassery that is almost a perfect examplar of this book's sloppy writing, in a side box titled "The Nisei: Japanese-American Soldiers" (presumably it's there to prove that Christianist America is inclusive). Unfortunately, while the text does mention that when they were sent to detention camps, Japanese-Americans often lost their businesses and homes, it doesn't suggest that this was a basic failure of the American ideal (or that Ronald Reagan actually signed a reparations bill). And of course, it screws up a fairly basic term:

Many young men, eager to fight for their country enlisted and formed several combat units. These Japanese-American soldiers were known as the Nisei, which means second generation, because the men were all sons of Japanese immigrants and were born and educated in the United States. During the war, the Nisei displayed unflinching devotion, patriotism, and courage...

The entire section uses "Nisei" as if it referred only to these soldiers, when it's a generic term referring to any second-generation offspring of immigrant Japanese parents -- it's nice, we suppose, that the book praises the soldiers' patriotism and valor, but goddammit, their sisters and brothers back in the concentration camps were Nisei, too.*

Then again, this is a book that can't get basic terms like "socialism" and "evolution" right, and those are English.

Let's close with an image by Bill Mauldin, who had as much tolerance for weaselly language as he did for military spit 'n' polish:

*We were suprised to find this is not corrected in the 2010 3rd Edition, either. It seems implausible that between the 1997 edition and the revision, no one pointed out the error -- these idiots simply don't care.

Next Week: The Cold War, as if the whole freakin' book weren't already about the Cold War.

Check out Wonkette on Facebook and Twitter and even on Tumblr. And if you found that last image a little Mauldin, Doktor Zoom is on Twitter, also, too.