Sundays With The Christianists: A 'World History' Textbook To Protect Homeschooled Darlings From The Big Mean U.N. 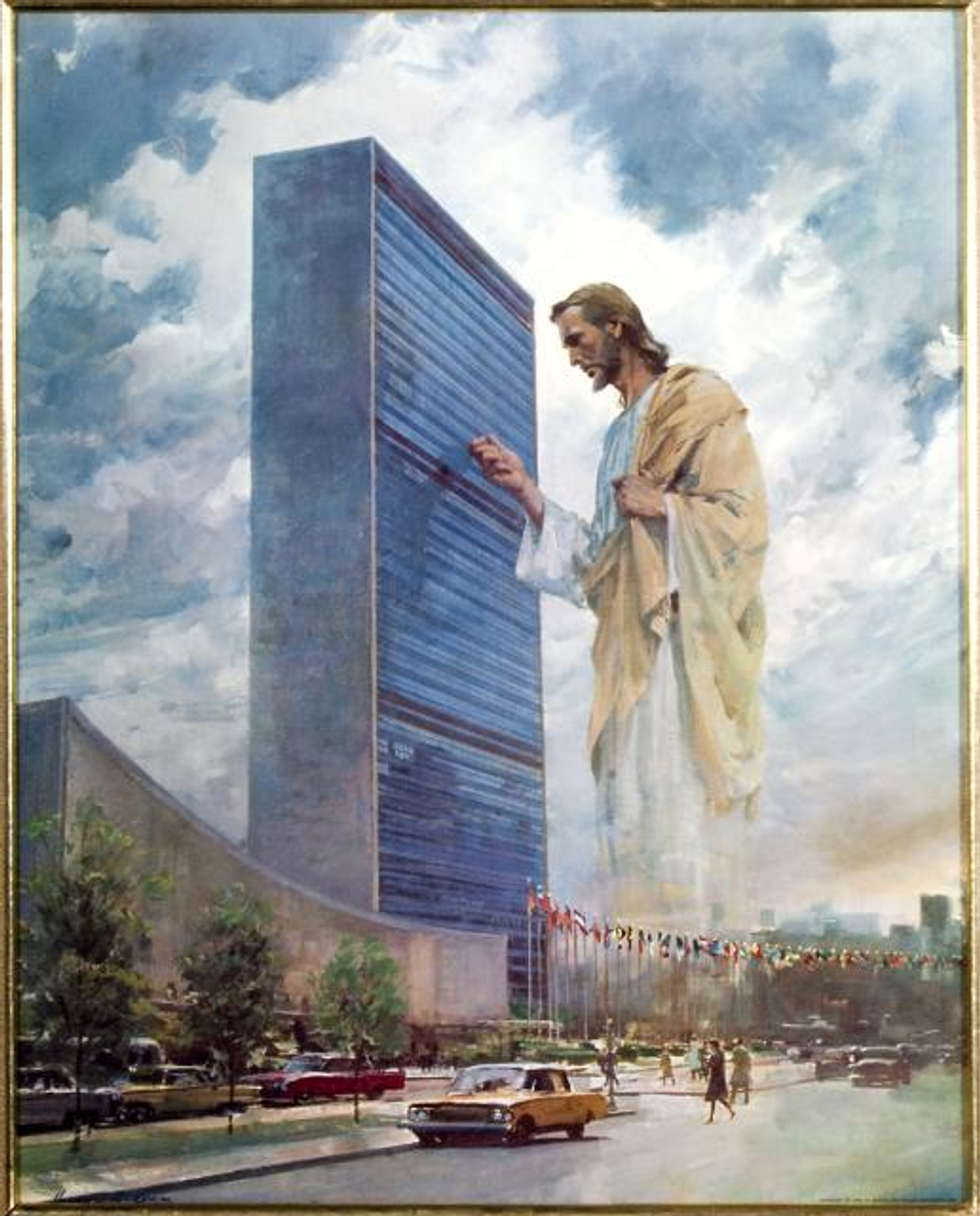 Be of good cheer, intrepid Wonketteers! We are very nearly finished with our 10th-grade textbook,World History and Cultures In Christian Perspective, which means that very soon, Saint Reagan and Jesus will come to take us home! (That, or we'll delve into a sex ed book from the same publisher.) Last week, we polished off World War II, so this week, it's time for the bestest clash of civilizations evar, the Cold War. So dust off your Civil Defense helmet, hunker down in your fallout shelter, and learn to love The Bomb! But first, a word about the United Nations, which is both a "colossal failure" and the "foundation for a totalitarian, one-world government."

Nossir, they do NOT like the UN one darn bit. The best they can say about it is that while some of its founders meant well, it quickly became a tool for the spread of International Communism, which it continues to support to this very day. Yes, even in the 2010 third edition of the textbook. In part this is because communists participated in its founding -- they even let communist Rooshians participate in the writing of the UN Charter, and of course, the secretary-general of the 1945 San Francisco Conference that created the UN was Alger Hiss, who everyone knows was a Rooshian spy. Here's just how bad the organization is:

Every secretary-general since the UN’s founding has been either an avowed Communist or a socialist.*

At the very heart of the United Nations is a collectivist philosophy that opposes the kind of individual freedoms cherished in free nations like the United States. The UN continues to pursue the humanistic, utopian goals of its founders, claiming to seek world peace while laying the foundation for a totalitarian, one-world government. As history has proven time and time again, the real objective of the UN is not world peace but worldwide power.

Moving right along, we get to the meat of the chapter, the Cold War, which "was not a new conflict but rather a new phase in the continuing Communist struggle for world domination." The editors even quote the 1964 red-baiting classic None Dare Call It Treason as proof that "peace movements" are merely a tool of communist subversion, so you know they're serious. We also learn that all the nations of the Free World "stood in opposition to the human slavery of international Communism." This would include freedom-loving nations like Pinochet's Chile and the Shah's Iran, of course. (More on this in two weeks [we're so slow! --Dok]. Spoiler alert: there will be selective use of detail!)

Before getting into all the good juicy international proxy wars, though, the editors devote a section to "Communist Subversion and Espionage," although there is regrettably nothing in there about our precious bodily fluids. Needless to say, the Rosenbergs and Klaus Fuchs are mentioned, but we also learn that American aid to the USSR during World War II was part of the Soviet plot, since the Russians "not only used the weapons and supplies to drive out the Nazis, but they also used them to overrun Eastern

Europe" (which, we would note, was sort of in between Russia and Berlin). The textbook also claims that

Communist sympathizers, including Harry Hopkins, the director of Lend-Lease and a confidant of FDR, also used Lend-Lease shipments to send top-secret information and materials to the Soviets.

We will not claim any special historical expertise on this, but a little noodling around on the interwebs suggests that, much though haters of the New Deal and FDR want him to be one, Harry Hopkins was no Soviet spy. But hey, he might as well have been, because come on, FDR was a socialist anyway. But the bullshit really starts flying when the book gets to an opportunistic junior senator from Wisconsin:

During the late 1940s and early 1950s, Congressional investigators also uncovered several Communist spy cells within the U.S. government. Senator Joseph P. McCarthy exposed much Communist activity in the State Department, in the entertainment and intellectual community and even in the Army. Because of the great controversy caused by his accusations, McCarthy came under severe criticism and personal attack, but many of his conclusions, although technically unprovable, were drawn from the accumulation of undisputed facts.

That there is some high-octane bullshit, now isn't it? Yes, yes, the Venona project proved that Soviet agents in the U.S. did in fact exist, but that's a far cry from vindicating "tail-gunner Joe" -- whose only flight as a tail gunner was a ride-along on a non-combat mission. (What is it about rightwing guys named Joe getting these inaccurate nicknames?)

And yet somehow, even though it was shot through with communists, the Truman Administration manages to win credit from the editors for the Marshall Plan, the Berlin Airlift, the "containment" doctrine, and the creation of NATO. Clearly, communism is a corrupt system, since those hundreds of Soviet agents didn't seem to have had any real effect on U.S. policy, except, maybe, for somehow making George Marshall "betray" Chiang Kai-Shek and the Nationalist Chinese.

*This line is removed in the 2010 edition; we're guessing that the editors couldn't quite stretch it to cover Ban Ki-moon -- South Korea is anti-communist and virtuous, after all. The rest of the text remains the same.

Next Week: Everything from Korea to Reagan, and why we still must not trust the Soviets.

Check out Wonkette on Facebook and Twitter and even on Tumblr. And if you can suggest any good pumpkin patches to microfilm in, Doktor Zoom is on Twitter, also, too.