bertrand russellChristianistsculture warseducationjohn deweyphilosophypt Part 15: Scary Thinkers Whose Books Are Dangerous (Or Would Be If Anyone Still Read)wingnutsworld history and cultures

Sundays With The Christianists: A 'World History' Textbook To Ward Off Dangerous Modern Thinking 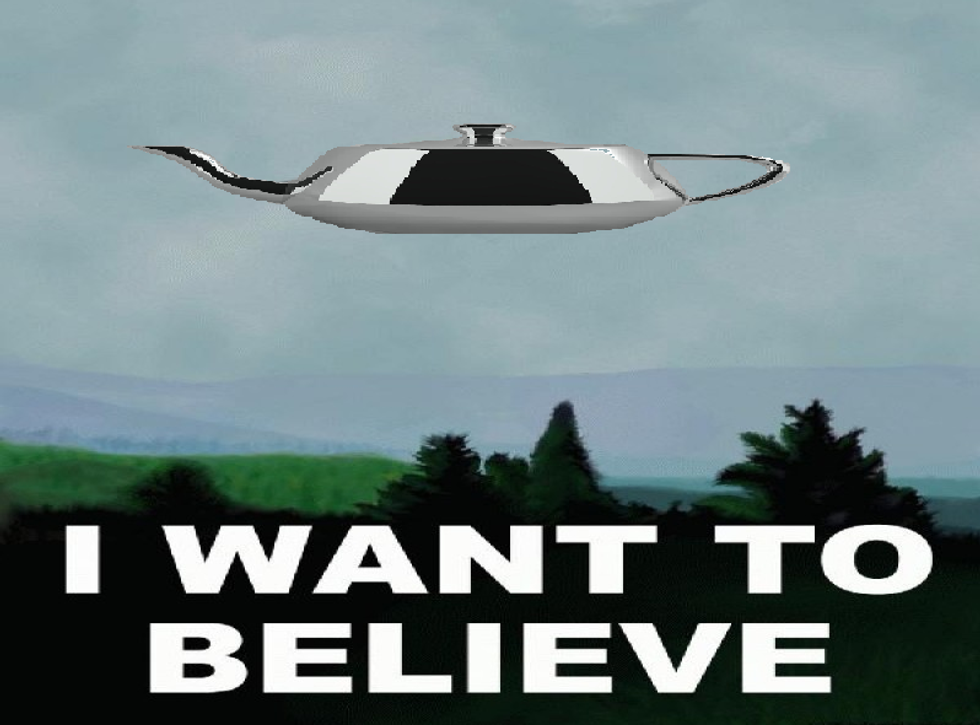 Greetings, Heathens! Welcome to another voyage into Homeschool America, via our 10th-grade textbook,World History and Cultures in Christian Perspective, and its staunch opposition to anything ungodly, and of course to most of the modern era. Last week, we learned why science is not really scientific (because no Jebus, duh); this week, we'll see just how many other aspects of modern culture can be demonized in a few short pages! Let's start with philosophy!

First up, we'll dismiss a major branch of philosophy in three sentences, and attribute the thinking of a whole bunch of philosophers to one English guy:

The next step after Comte’s positivism was logical positivism, which originated in the work of English mathematician / philosopher Bertrand Russell (1872-1970). Russell followed Comte in insisting that only empirically verifiable facts and logically valid mathematical equations can be true. In other words, man’s mind is the only absolute, and anything that cannot be perceived with human senses or reason does not even exist! According to logical positivism, knowledge of God or spiritual things is impossible.

We feel a bit bad for the readers who said they'd been waiting to see what World History had to say about Bertrand Russell, because that was it -- these twits find the notion of mere physical reality so laughable that it gets blown off with an exclamation point. If it's any recompense, this week's illustration was lovingly crafted in MS-Paint with Russell in mind. But we can't tarry; there are so many other thinkers whose life's work needs to be oversimplified and distorted!

Consider, for instance, the assassination of William James by these cowards' robust fnord:

Another philosophy which began to gain acceptance during this time was pragmatism, the philosophy that an idea or an action should be judged solely by its results, regardless of any moral or Scriptural considerations. Several scholars embraced pragmatism, but William James (1842-1910), a teacher at Harvard University, did the most to popularize it. Pragmatism blots out the distinction between right and wrong and embraces the un-Scriptural concept that since all truth is relative, the end justifies the means. In reality it differs very little from other philosophies based on Darwinism and materialism.

We have a feeling that maybe William James might raise his hand to object to the notion that he utterly ignores "the distinction between right and wrong," but we must also point out that 1) He is anti-Scriptural and therefore damned, and 2) we could never get into his brother's ponderous novels, so there.

The next target for a summary drive-by is existentialism, which hardly needs to be distorted to sound scary to a Christianist.

The emptiness of materialistic philosophies led some to turn to existentialism, the "anti-philosophy" which claims there is no truth or reality, forcing man to make his own meaning in an absurd world.

When you keep in mind that the "reality" the ediors refer to includes a Supreme Being who is infinitely finicky about what people do with their genitalia but who also has reasons -- mysterious, but reasons nonetheless -- for seeing to it that toddlers die of cancer, this seems like a pretty good definition. We get the standard linkage of Nietzsche's Deicide and the horrors of totalitarian strongmen, a brief mention of Sartre and Camus, and finally a sniffy dismissal of existential thought as the root of "much that seems unreasonable and formless in modern art, music, and literature."

Now, how about the pernicious influence of liberalism in education? It's time for the editors to take a swing at that Dewey:

Education suffered terribly from the anti-Christian philosophies of the early-20th century John Dewey (1859-1952), an influential professor of education at the University of Chicago and at Columbia University advocated what came to be called "progressive education.” Dewey readily accepted Darwinism and pragmatism and believed that there were no absolute morals or values. Applying these liberal philosophies to education, Dewey (and the educators he influenced) abandoned the teaching of moral absolutes and encouraged a permissive atmosphere in the classroom that allowed children to "follow their animal instincts" and to practice "self-expression."

What a monster! We wonder if Dewey promoted "selective quoting" as well? Even Conservapedia is kinder to Dewey than the editors of World History are. Let's see what else this one man did to wreck America forever:

A bitter atheist, Dewey believed that God was a figment of man’s imagination...Dewey proposed that education be used to change individuals according to the false philosophies of modern liberalism in order to create a new social order -- democratic socialism.

Left unmentioned here is Dewey's condemnation of Stalin, a position which won him some dedicated enemies on the Left, back when America actually had a Left to speak of. Also amusing is the unstated assumption that, since Dewey's ideas on education were widely influential, schools are therefore factories turning out little socialists.

By the mid-20th century Dewey’s philosophies had permeated much of the American educational system, as well as influencing education elsewhere. Sadly the results of conforming to Dewey’s ideas have included a lack of academic learning and a dearth of moral values among the students exposed to them.

And here we get the roots of the conservative case against public schools: they are a part of the plot to Stab America in the Back by turning children into rebellious Marxists, and must therefore be rooted out and replaced with something better, like, say, schools using A Beka textbooks. And it's all John Dewey's fault. Dewey's Democracy and Education, incidentally, is at #5 on Human Events'notorious list of the "10 Most Harmful Books of the 19th and 20th Centuries," presumably because of the "permissiveness" thing, but maybe, as well because Dewey's educational ideas "helped nurture the Clinton generation."

The section closes out by explaining that, in sum, all the liberal ideas that the textbook doesn't like "are interrelated, and in recent years they have often been referred to collectively as the religion of secular humanism." And it really is a religion, you see, because it combines the very religious idea of secularism,

the belief that matters of morality should be based on consideration of the well-being of mankind in this present life, to the exclusion of all considerations drawn from belief in God or in a future existence

with the similarly religious idea of Humanism, which relies "upon man’s reasonings and feelings alone, with no respect for God’s authority" -- and that makes it a religion, which "ultimately is the worship of man."

Now, let's contrast this view with Bible-based Christianity, which believes that matters of morality must be based on what human reason and prejudices discern as God's wishes, based on a book by humans who were quite certain that God had told them what to put into it. So "secular humanism" really IS just as much a religion as Christianity, and therefore the Constitution demands that it not be taught in public schools, you dirty atheists.

Next Week: Liberalism and Conservatism in the Arts! It's a smackdown between god-fearing American realists like Norman Rockwell and weirdo Europeans like Picasso. Also, Modern Literature: Flight From Reality, in which we find out that George Orwell was a conservative.

Check out Wonkette on Facebook and Twitter, and if you want to help destroy America from within, 140 characters at a time, Doktor Zoom is on Twitter, also, too.