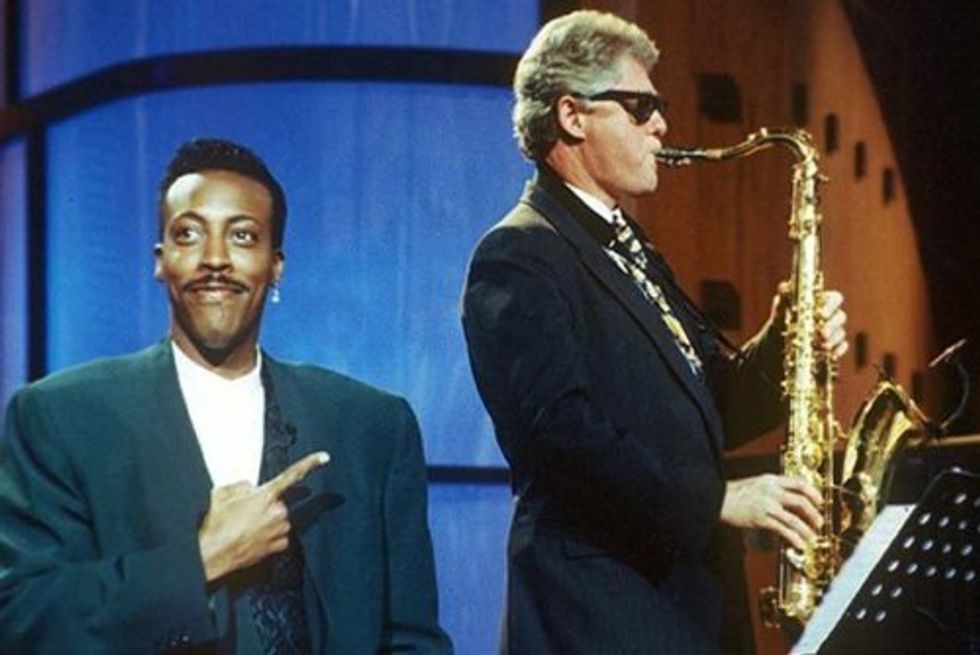 Put on a plaid flannel shirt and break out your Nirvana CDs, kids, because our rightwing Christian textbooks are looking at the '90s: Bill Clinton is the president, and America is in deep moral decline, because didn't you just read the name of the president?

Our 8th-grade text from A Beka, America: Land I Love (2006) explains how Bill Clinton was different from virtually every other president who had ever preceded him in the history of EVER:

Before the mid-20th century [Kennedy. They mean Kennedy -- Dok Zoom], private life was as important as public life for an elected official. People realized the importance of character in a leader and voted accordingly. But over the years, spiritual decline has blinded many to the blessings of a righteous ruler (Prov. 29:2), and, as a result, men of weak character have been able to hold public office. This de-emphasis of character was demonstrated in the 1992 Presidential election, which brought Bill Clinton to the White House. When critics brought up his past anti-American activities, marital infidelity, and questionable business practices, the Democratic candidate insisted that his personal affairs had nothing to do with his ability to lead the country. With the help of the media, he focused the nation’s attention on economic rather than moral issues and convinced many Americans that a candidate’s private life was his own business. As a result, people voted for Bill Clinton in spite of his questionable character, and he won the Presidency not once but twice.

Remember how we never heard anything in the media about Clinton's infidelities? If only they'd mentioned that! We also learn from Land I Love that Bill Clinton was somehow an avatar of the entire nation's morality, because in the 1990s,

America was losing the goodness that Alexis de Tocqueville spoke of in 1831, "America is great because America is good. When America ceases to be good, America will cease to be great.”

As proof, the textbook notes moral crises in business, fretting over the Savings and Loan crisis (which started during the Reagan presidency) and adds that "Many American businesses lost millions of dollars yearly through waste, inefficiency, and fraud in the work place," problems that apparently never existed prior to the 1990s. So terrible was the decline in morality that "By the mid-1990s, the Protestant work ethic seemed rare." (A page later, however, the book is praising the independent entrepreneurial spirit of Internet millionaires.) Other signs of the nation's moral collapse include the spread of "gambling and pornography" --  gambling was especially pernicious since many states, "unwilling to cut budgets, decided to raise money through state lotteries and casino gambling." The Republican craze for cutting taxes in the 1980s was not, of course, a factor in such decisions.

There's always room for another attack on "humanistic psychology," which apparently went into remission under Reagan but exploded again under Clinton. And as proof, Land I Love cites a book published in 1973 (?!), Karl Menninger's Whatever Became of Sin?, which argued that since Freud didn't believe in sin, no one takes personal responsibility for their actions anymore. No, Land I Love doesn't actually reference the 1990s at all in this section, but you can't deny that t's true, because we're all sinners. And in the next, the text explains that since nobody believed in personal responsibility anymore, the '90s was a time of "judicial weakness" as judges gave criminals light sentences and returned them to the streets so they could prey on decent people again (if there were any decent people left). So yes, the decade that saw the rise of inflexible mandatory minimum sentences, "three strikes" laws, and "zero tolerance" policing was a time of lax criminal justice, according to these bozos.

The final sign of moral decline in the '90s is "educational failure," which came about because "By 1994, basic phonics, traditional math, drill, and repetition had been virtually eliminated from many school curriculums." Why 1994? Probably because that was the publication date of the first edition of Land I Love and the revision didn't bother to change it. Worse, all that denial of personal responsibility led to badly-taught children getting labeled "learning disabled" (instead of, presumably, getting spanked and handed a Bible), so that greedy schools could qualify for more federal government aid. But at least there's this good news: "Fortunately, Christian schools continued to thrive, and home schooling increased in popularity." Don't you feel lucky to be free of those terrible public schools? Yes you do.

As for Bill Clinton, Land I Love explains that he was he was the puppet of some very scary interests:

During his first election campaign, Bill Clinton made many promises to liberal groups—homosexuals, feminists, radical environmentalists, and others. Within days of his inauguration, President Clinton issued several executive orders. The first order removed restrictions imposed on abortion under Reagan and Bush. Clinton also supported an amendment to make abortion a constitutional right, but the bill made little progress in Congress.

That last one was certainly news to us, and given Clinton's actual shifts on abortion policies as a governor and candidate, we're inclined to think it's pretty much invented. We don't remember anything like that, but maybe we missed something?

Clinton also was a horrible person for trying to lift the ban on gays serving in the military, which leads to exactly one surprisingly accurate sentence in Land I Love:

Widespread opposition from Congress and the public forced President Clinton to compromise on the issue, however, with a "don’t ask, don’t tell" policy that left both homosexuals and conservative Americans dissatisfied.

And then there's Hillary and her attempt to introduce "socialized medicine" in the form of a plan that would be "funded by businesses and their employees," which actually sounds an awful lot like "insurance." Here's what we learn about how the proposal would have worked:

Conservatives warned that the average person would pay more taxes and become more dependent on the government, while receiving substandard health care-the hallmark of socialized medicine in every country that has it. Nevertheless, the First Lady continued her crusade for national health care, and, in 1993, presented a plan to Congress for mandatory health insurance for all Americans. While Congress debated and discussed the complex plan, opposition grew among the American public. By 1996, the plan was dead; Americans simply did not want a socialized health care system.

Sadly, no mention of the intense lobbying effort against the plan, because really, the only thing you need to know was that it was socialist, and Americans hate socialism.

Our other textbook, the 11/12th-grade United States History for Christian Schools (Bob Jones University Press, 2002), at least gives us a bit more detail in its section headed "Health Care Fiasco," noting that

When he undertook to reform American health care, Clinton found that even a Democratic Congress was no guarantee of legislative victory. Joining the president in this effort (and in the blame for its defeat) was the First Lady, Hillary Rodham Clinton.

U.S. History gives us just a tiny bit more detail about why the plan was bad, and it boils down to complexity, taxes, and abortion. We're told that the proposed legislation was a "1,342-page plan" and that it would "allegedly take care of those who had insufficient medical insurance (or no insurance) and would hold down rising costs." Ah, but then Americans found out that it would be complicated, and Americans do not like complicated things. You know, like our actual healthcare "system," as if there were anything systematic about it.

At first, the promises of universal insurance coverage and low costs for medical care attracted many Americans. Then, as details of the plan emerged, the public realized that someone would have to pay for those lower costs. The First Lady suggested raising taxes to pay for the plan. She added further controversy by insisting that the plan provide tax support for abortion. The sheer size of the plan gave many pause. The Clinton health care plan would create a new government bureaucracy, with some experts estimating that one-seventh of American business would come under government regulation. Soon, an outcry arose from those who saw the plan as too expensive and too intrusive into American life.

And so it went away forever because obviously it was bad and unworkable, and someone would have to pay, and so today we enjoy the best most affordable medical care in the world.

U.S. History adds that the "conservative backlash" to healthcare reform was in part due to an exciting development in American media: talk radio. After noting that television had left radio as a second-place entertainment medium, mostly dedicated to music, the book explains that

In talk radio, speech replaced music. Aggressive and impassioned radio hosts expressed their usually conservative views and took phone calls on the air in which listeners earnestly and heatedly voiced their protests about conditions in America. The most important of these talk radio hosts was Rush Limbaugh. He built a nationwide network of listeners energized to speak out on political issues.

Not mentioned in that section is the FCC's 1987 revocation of the Fairness Doctrine, or the increasing consolidation of the radio industry, which made loud-n-angry especially profitable. Obviously, the rise of talk radio was just something that Americans wanted because it was good, and Rush Limbaugh was a positive force for improving our political culture.

U.S. History also notes the resurgence of rightwing Christianity, not because it once again had a Democrat to kick against, of course, but because of excellent organizing. It mentions that the Moral Majority of the '80s had declined in influence -- apparently for no particular reason, because they might have to mention the scandals involving Jim Bakker and Jimmy Swaggart, who weren't actually part of Jerry Falwell's Moral Majority group, but tainted it nonetheless. The book credits Pat Robertson and his "Christian Coalition," saying that even though he lost his 1988 bid for the Republican nomination, Robertson

revitalized the religious right by putting together a grassroots network of Roman Catholics, Charismatics, and evangelicals who were united on moral issues such as abortion and homosexuality.

What's sort of amusing here is that this is the same book that decried Billy Graham and the ecumenical movement of the '50s because they "compromised the truths of Scripture in order to achieve outward unity," since they let Catholics and insufficiently-rabid evangelicals in. Presumably, the Christian Coalition had  less of a Scriptural problem since it was primarily rightwing, and miraculously the supporters of Romish Popery were no longer a problem this time around, because shut up, OK?

And once again, U.S. History manages to surprise us, this time with a single word. The section on the resurgent Christian Right closes with a look at the rise of James Dobson's Focus on the Family, and ends with just a hint of doubt:

The program encouraged Christians to get involved politically. A nationwide audience listened as Dobson and his guests promoted various pieces of legislation and advised ways for Christians to "take their nation back" from those who had allegedly moved the country from its Christian foundations.

"Allegedly"? We can only imagine that sneaked in there by accident -- you'd never see such liberal sentiments aired in Land I Love. You have to wonder if someone at Bob Jones University got fired over that.

Next Week: Bill Clinton ruins the rest of the world too, and gets impeached without any mention of a blue dress.