Sundays With The Christianists: American History Textbooks For Homeschooled Monkeyboys 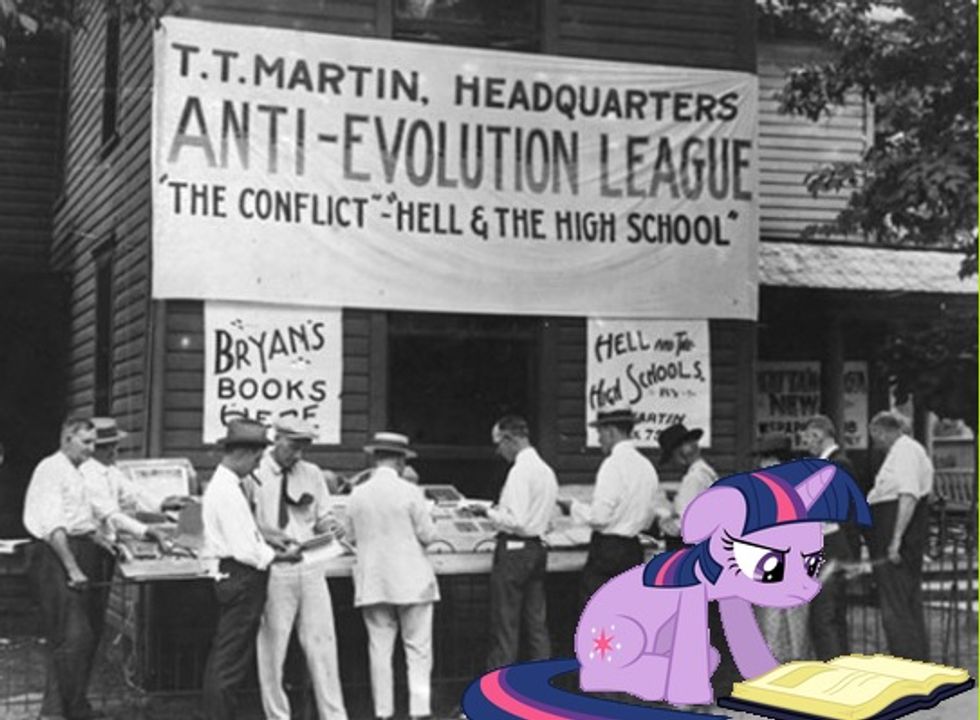 Hey there, history fans -- time for another trippy trip back in time to the 1920s, that thrilling decade that brought us wacky fads like raccoon coats, bathtub gin, and Christian fundamentalism. This week, we'll take a look at the 1925 Scopes "Monkey trial" and the religious infighting that helped propel it to national headlines. Of course, we'll be looking at it through the lens of two rightwing Christian textbooks aimed at the private school/homeschool market, so you may want to want to pursue somereliable reading as well.

Both of our textbooks ground the Scopes trial in the larger context of the "modernist-fundamentalist controversy" within American Christianity, which was rooted in questions about how the Bible should be interpreted -- modernists advocating approaching it as a text composed of oral history and myth, subject to investigation using the methods of anthropology and literary criticism, and traditionalists holding to the "fundamentals" of biblical inerrancy and literalism (the term "fundamentalism" was coined in 1920) and insisting that the Bible is the direct revealed Word Of God, period.

Modernism came to America through ministers who studied at liberal German universities, where Darwin’s theory of evolution was often combined with a sympathy toward Marxist socialism. Soon, it had infected many seminaries and church denominations, denying Biblical truth and teaching that man was only an animal -- the highest product of the evolutionary process. Modernist preachers believed the Bible to be a collection of ancient myths or fairy tales. The Modernists argued that (1) the Bible is full of errors and unreliable, (2) man is basically good, (3) Jesus is not God, and (4) there is no Heaven nor Hell.

Our 11th/12th-grade textbook from Bob Jones University Press, United States History for Christian Schools, has a slightly less fevered definition of modernism, but agrees that "modernism was not Christianity but another religion" and explains that fundamentalism grew out of "several orthodox movements in the Progressive Era [which] resisted the theological errors of modernism, the social gospel, and the inroads of evolution":

The origin of the term fundamentalism lies in the belief of some Bible-believing Christians that there are certain "fundamental" doctrines which no one can deny and be a Christian -- doctrines such as the authority of Scripture and Christ’s deity, vicarious atonement, resurrection, and Second Coming. In 1910 two Christian businessmen sponsored the publication of a series of essays to defend key doctrines. Called The Fundamentals, these essays by some of the leading Christian scholars of the day were sent at no cost to pastors, professors, and laymen all over the country. In 1920 a Christian editor wrote, "We suggest that those who still cling to the great fundamentals and who mean to do battle royal for the fundamentals be called ‘Fundamentalists.’ "

Both books note that the fundamentalist/modernist divide led conservative, orthodox believers to leave major Protestant denominations; Land I Love seems to throw in a bit of gloating, which you'd think they'd avoid since schadenfreude is one of those dangerous German innovations:

So suck it, northern heretics! (Also not noted: there were, of course, modernists in the South, like the dangerous radicals running Vanderbilt University. But let's not confuse the darlings.)

And so we eventually get to Dayton, Tennessee, and the Scopes trial, which Land I Love discusses in its inimitable good-guys/bad-guys style:

Until the 1920s, most churches believed the fundamental truths of the Bible. In 1925, the town of Dayton, Tennessee, drew national interest when an organization called the American Civil Liberties Union (ACLU) drafted John Scopes, a substitute teacher, to be tried in court for allegedly teaching the theory of evolution in the classroom. Because the Tennessee state legislature had banned the teaching of evolution in the public schools, they decided that to be fair it should be illegal to teach the Biblical doctrine of creation as well.

Of course, this isn't quite accurate, both because this is Land I Love and because the ACLU makes a terrific bad guy: In reality, the ACLU advertised its willingness to support a test case against the Tennessee law, and then the city boosters of Dayton hatched the idea the trial, correctly assuming that the resulting publicity would bring attention and money to the town. Dayton only went to the ACLU after the informal committee of town leaders had gotten Scopes on board and planned out some initial details of the prosecution and defense. (Also, the initial goal wasn't so much to attack faith as to present a modernist case that science and faith were not incompatible, although that went out the window once Clarence Darrow came onto the defense team.)

As for the trial itself, Land I Love gives us only this hilariously brief summary:

Newspaper reporters and radio announcers from far and wide descended on Dayton for the Scopes, or "monkey," trial. The famous lawyer and statesman William Jennings Bryan brilliantly defended the Bible and won the case against evolution being taught in the schools.

Christian scholar Harry Rimmer (1890-1952), lectured for Creation and against evolution in American universities. He successfully held back the error of evolution from influencing the general population for several decades.

No mention of Darrow, H.L. Mencken, or the widespread mockery of Tennessee, not even with the disclaimer that "liberal elites" were behind that -- Bryan won, and that's that. And yet, somehow, evolution stuck around, almost as if it were an idea whose fitness helped it survive. Haha, we are kidding -- Satan was behind it all.

U.S. History goes into a somewhat more detail, with a full page text box on Bryan and his career, and a more accurate (though of course creationism-friendly) account of this particular Trial Of The Century:

In the South where the major Baptist, Methodist, and Presbyterian denominations were generally found in the twenties, one of the fundamentalist efforts there centered on removing the teaching of evolution from the public schools. As these Christians pointed out, evolution was not simply irreconcilable with the Biblical account of creation; it directly assaulted the authority of Scripture. With leaders such as William Jennings Bryan, they pushed for laws banning the teaching of evolution but succeeded in doing so in only a few southern states, one of them being Tennessee. Wanting to put their town on the map, some town leaders of Dayton, Tennessee, coaxed a high school teacher, John T. Scopes, to challenge the law.

The result was a media event as national attention focused on the town for the summer of 1925. Clarence Darrow, expert trial lawyer and agnostic, defended Scopes. Bryan, who helped the prosecution, also served as a witness, called by the defense as an expert on the Bible. Although Bryan showed commendable courage in his defense of the faith, he was no Bible scholar and did not make the best case for the cause. Scopes was convicted, but Bryan and the antievolutionists lost the publicity battle. Only a few days after the trial, Bryan died. For many wishful critics, fundamentalism died with Bryan in Tennessee. The movement was still very much alive, however, as it demonstrated in 1928 when it assisted in defeating the antiprohibition, Roman Catholic Democratic candidate Al Smith in the presidential election.

Sadly, there's once again no mention of H.L. Mencken's acidic reporting, because why would they bother? The University of Missouri-Kansas City has a lovely set of links to all of Mencken's reporting, which includes such great bits as this:

The town boomers have banqueted Darrow as well as Bryan, but there is no mistaking which of the two has the crowd, which means the venire of tried and true men. Bryan has been oozing around the country since his first day here, addressing this organization and that, presenting the indubitable Word of God in his caressing, ingratiating way, and so making unanimity doubly unanimous. From the defense yesterday came hints that he was making hay before the sun had legally begun to shine--even that it was a sort of contempt of court. But no Daytonian believes anything of the sort. What Bryan says doesn't seem to these congenial Baptists and Methodists to be argument; it seems to be a mere graceful statement to the obvious....

The selection of a jury to try Scopes, which went on all yesterday afternoon in the atmosphere of a blast furnace, showed to what extreme lengths the salvation of the local primates has been pushed. It was obvious after a few rounds that the jury would be unanimously hot for Genesis. The most that Mr. Darrow could hope for was to sneak in a few bold enough to declare publicly that they would have to hear the evidence against Scopes before condemning him. The slightest sign of anything further brought forth a peremptory challenge from the State. Once a man was challenged without examination for simply admitting that he did not belong formally to any church. Another time a panel man who confessed that he was prejudiced against evolution got a hearty round of applause from the crowd....

Next Week: Flappers, Flivvers, and how FDR made Big Government happen.