Sundays With The Christianists: American History Textbooks For Junior Strikebreakers 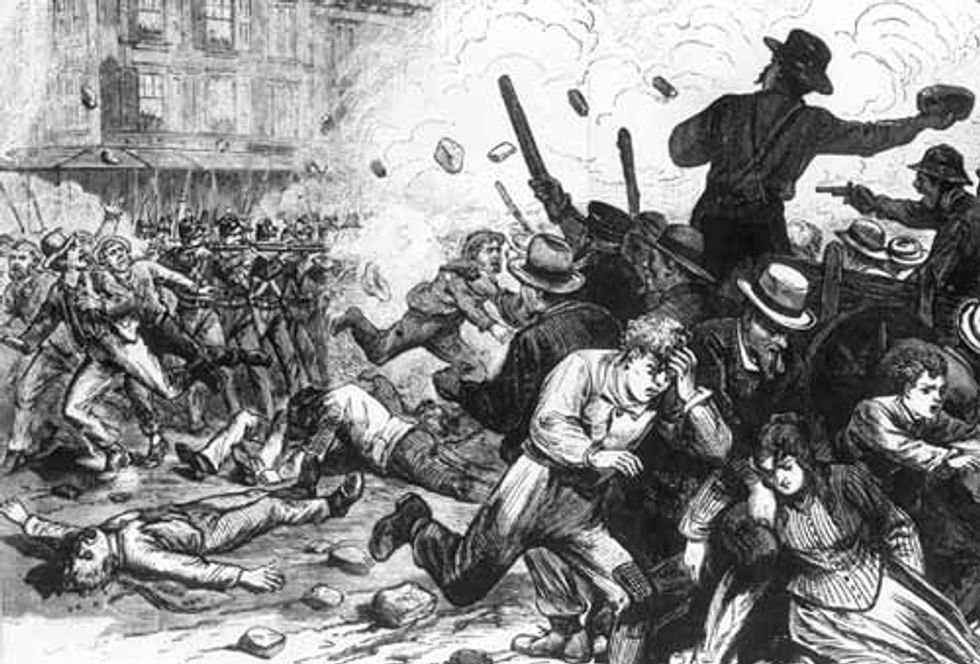 This week, we'll be looking at our Christian textbooks' coverage of the labor movement in the 19th century -- a focus that seems especially timely on a weekend when striking BART workers in San Francisco are suspending picketing after two track workers werekilled in an accident. 130 years ago, an accident like that in the middle of a strike might have triggered riots, which would then be an excuse to bring in armed strikebreakers; today, it's cause for a candlelight vigil. So, progress, maybe. (And of course, the current strike has no shortage of voices calling for the banning of public employee unions, because Reagan fired the air traffic controllers.)

Surprisingly, both of the Christian textbooks we're reviewing acknowledge that there were actual problems caused by rapid industrialization following the Civil War. Our 11th/12-grade text from Bob Jones University Press, United States History for Christian Schools, emphasizes that industrialization raised standards of living, but also admits

there was a human cost to industrialization. Although they had been accustomed to working long hours on farms, workers found that six twelve-hour days or more could be trying when combined with other factors such as unsafe factories and wage cuts. Hard times also brought war widows and children into the factories in order to make ends meet, further burdening the problems of the labor system.

But don't worry, despite this almost heretical admission that not all was well, the book very quickly shifts to blaming unions for violence and unrest.

Our 8th-grade textbook, America: Land I Love (A Beka Book, 1994), presents unions as almost a kind of social club:

These organizations became popular because they provided workers with an opportunity to meet and discuss working conditions, wages, and other subjects of common interest. Sometimes, union members bargained with their employers for higher pay.

Land I Love is also far quicker to warn of lurking danger:

Labor leaders wanted to use unions as a political tool to improve working conditions. Some were socialists who used the labor union movement to gain political power.

Similarly, U.S. History is quick to offset the accomplishments of organized labor, giving Christian students a handy comeback if some smartass liberal gives credit to unions for ending child labor:

Under the leadership of Samuel Gompers, the [American Federation of Labor] supported higher wages, shorter working hours, safer and cleaner working conditions, and elimination of child labor. The AFL’s goals, however, were not entirely humanitarian. Unions in the AFL did not oppose child labor primarily out of sympathy for children, but because child labor contributed to low wage rates and made jobs for adults more scarce.

Those selfish, selfish unionists! U.S. History also credits the AFL with winning acceptance of the eight-hour workday as a national standard, but immediately transitions to the really important stuff:

Despite such accomplishments and the rapid growth of its membership, the image of the AFL as well as that of other unions was marred by the violence of strikes and infiltration by radical elements.

Land I Love does a similar pirouette, emphasizing that Gompers -- who they allow to be a pretty good guy -- opposed socialism and anarchism, and that he preferred strikes as a method of getting employers to "meet workers' demands." The book immediately follows this with a section headed "Strikes and Violence":

Americans soon learned that strikes could easily lead to mob violence and destruction. Anarchists, Communists, and even socialists often used labor strikes to stir up trouble. In the national rail strike of 1877, anarchists stirred up the workers until federal troops had to be called in to restore order. In 1886, a union demonstration in Chicago’s Haymarket Square led to tragedy when someone threw a bomb into the crowd, killing seven people. A number of anarchists were tried and convicted for this crime.

Needless to say, there's no mention that federal troops and state militias "restored order" in 1877 by firing on crowds, killing scores, or of the contentious history of the Haymarket bombing. No need to confuse the little darlings.

U.S. History doesn't mention the 1877 strikes at all, or the disputed trial following Haymarket, but nonetheless labels Haymarket "the most famous example of labor violence" and says the strikers were "agitated by anarchists." And then there's the book's neutral treatment of the noxious Henry Clay Frick:

In 1892 violence erupted during a strike at the Carnegie Steel Company in Homestead, Pennsylvania, a suburb of Pittsburgh. Carnegie’s assistant at the company, Henry C. Frick, proposed lowering the workers’ wages because of the use of new labor-saving machinery. When the workers threatened to strike, Frick closed the plant, an action that has become known as a "lockout." Frick then hired three hundred guards to subdue picketers. When fighting broke out on July 6, 1892, nine people were killed, and the hired guards were beaten back. Despite this temporary victory for the workers, however, the Homestead Strike gained nothing. After five months of striking, the workers agreed to Frick’s proposal. The union was broken.

And so on. In discussing the Pullman Strike of 1894, U.S. History does at least acknowledge that it was sparked by the company's slashing wages by 25% with no reduction in the rent demanded of workers in company towns -- but after all, "these reductions were made necessary by the depression at the time," so the workers should have been more understanding. After striking Pullman workers were fired, the resulting general strike shut down mail service between Chicago and the west, and we learn that

Strikers and unemployed ruffians destroyed engines, cars, and equipment, causing owners to demand that federal troops be sent to break the strike. President Cleveland complied, declaring, "If it takes every dollar in the Treasury and every soldier in the United States to deliver a postal card in Chicago -- that postal card should be delivered."

Would you be astonished to learn that there's no mention of the 30 workers killed in the strikebreaking? We bet you will not be. But we do get this note about the tendency of liberals to just cold lie all the time: Eugene V. Debs, the head of the American Railway Union, imprisoned for ignoring an injunction to stop the strike,

claimed that it was while in jail that he became an avowed socialist, though in fact his views had been socialistic for all of his adult life.

They do at least acknowledge that socialism was popular enough that Debs ran for president four times as head of the Social Democratic party, so there's that.

Both books conclude that all that radical infiltration discredited whatever validity 19th century unions might have had. Land I Love blandly notes that while "labor unions became a strong political force," they weren't especially popular, and "[in]1900, only three percent of all workers were union members." U.S History goes a bit farther, with this interesting bit of cause-and-effect reasoning:

The violence and radicalism of the movement discredited unions for nearly a half century. Perhaps in part because of this radicalism, the government tended to side with management by providing court orders to end strikes and even providing troops to quell violence.

Or maybe the powerful and the moneyed stick together... nah, that can't be it. It was the unions and all their violence that forced peace-loving employers to fire machine guns into crowds of striking miners in Ludlow, Colorado -- another incident that somehow escapes the notice of both texts, but probably only because it happened in 1914. Hey, let's learn more about the rising standard of living!

Next Week: The Westward Expansion, and what had to be done about those troublesome people who were in the way.