Sundays With The Christianists: American History Textbooks For Red-Scared Homeschoolers 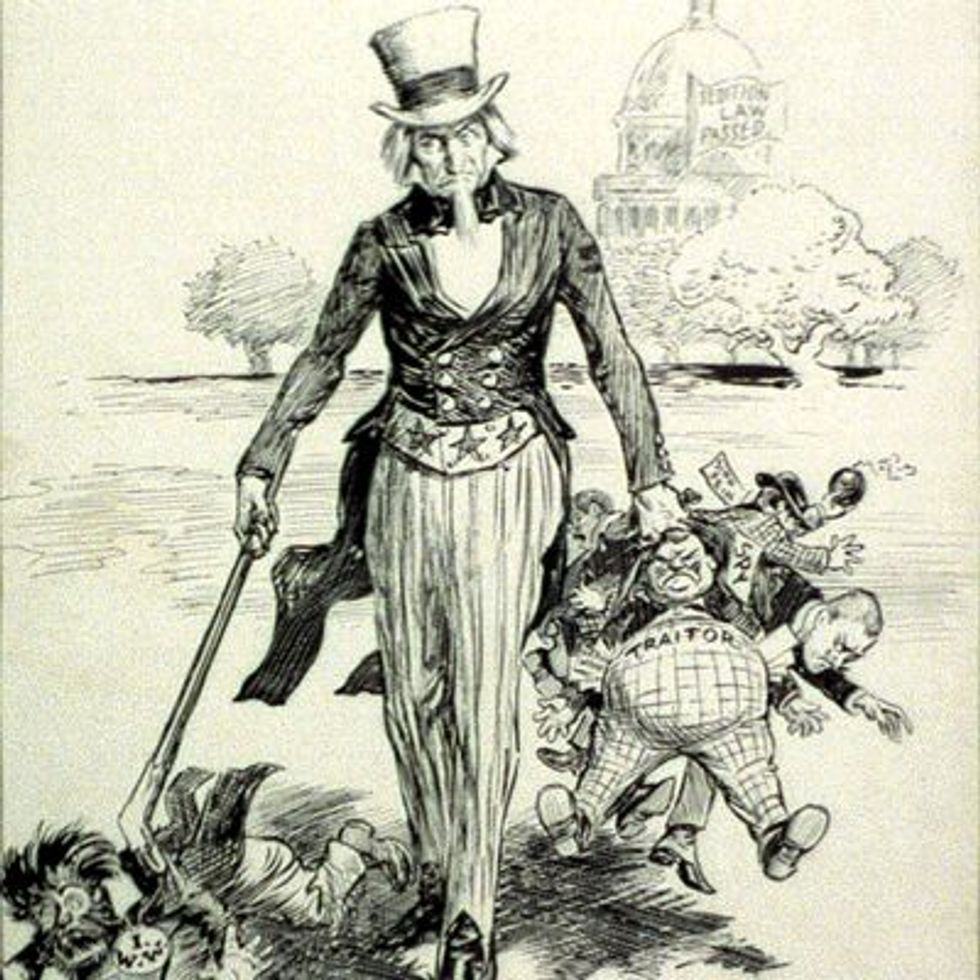 We hope some of you Wonkettarians are into Jazz Age cosplay, because we're going to be spending a few weeks in the 1920s as played out in our rightwing Christian textbooks. As we saw last week,our textbooks are pretty accurate and unproblematic when they have a real war to talk about -- plenty of dakka-dakka to keep the editors busy, maybe, so they didn't bother dragging God onto the literal battlefields of WWI. Once the Great War ended, the cultural and economic changes that followed give the editors plenty of material to see as part of a spiritual battle for America -- and of course a lot of our current kerfuffles really got rolling then (for instance, the very term "fundamentalist" was coined in 1920). And while we'll get to flappers and flivvers and monkey trials in the next couple weeks, for today we'll stick to our textbooks' coverage of the surge of nativism that erupted into the Red Scare and the 1920s resurgence of the Ku Klux Klan. Needless to say, it's only the wild-eyed radicals with weird foreign names that ended up getting booted out of the country.

Our 8th-grade textbook from A Beka, America: Land I Love, has no doubt at all about the reality of "The Communist Threat To America," which gets its own section heading. We learn that the 1917 Bolshevik Revolution in Russia sparked a "worldwide Communist movement" that included very real cells of terrorists in the USA:

A small group organized a Communist party in America in 1919. Socialist and Communist sympathizers in America supported Moscow’s program for the overthrow of capitalism by revolution. Communist organizers were a guiding force behind many labor strikes in the United States in 1919. William Z. Foster, a key figure in the early American Communist movement, planned and led a violent steelworkers’ strike. Many labor union members were influenced by Communist propaganda.

In this textbook, you can pretty much bet that most mentions of labor unions will include scary hints of communist infiltrators or leaders, because there were never any problems with business practices ever. (Remember, neither textbook mentions the Triangle Shirtwaist Factory fire of 1911. Why would they?) And these commie infiltrators were a serious threat to the country:

President Wilson’s attorney general, A. Mitchell Palmer, warned of a Communist plot to mail bombs to a number of prominent Americans. In June 1919, bombs exploded within minutes of one another in eight American cities. One of these bombs destroyed the front porch of the Attorney General’s home in Washington, D.C. Another bomb damaged the Wall Street offices of banker J. P. Morgan.

This is a pretty impressive bit of crappily written history in just 63 words. It manages to conflate three separate incidents (the mail bombings of May 1919, the coordinated bombings of June 1919, and the Wall Street bombing of September 1920). Land I Love dismisses the term "Red Scare" as a coinage by "scoffers" who didn't recognize the reality of the threat, and after praising the brave work of J. Edgar Hoover and the Palmer Raids in rounding up and deporting radicals, the section sums up,

The Communist menace was a real threat to the nation. Terrorists sponsored by Moscow were at work to overthrow American institutions and establish dictatorial rule.

Darn those Moscow-sponsored terrorists! Except for one teensy detail -- the 1919-1920 bombings were the work of a radical group led by Luigi Galleani, who was definitely an anarcho-communist, but whose radicalism predated the Russian Revolution by decades. Yes, yes, we know -- it's all communism, and all socialists and communists are exactly the same. Fine ideological distinctions only matter when you need to absolve Protestants of the crimes of the Inquisition or the Crusades, right?

Our 11th/12th-grade textbook, United States History for Christian Schools (Bob Jones University Press, 2001), appears to have been edited by one of those "scoffers" that Land I Love complains about, attributing the Red Scare to leftover wartime emotion:

The Kaiser was defeated, but some Americans feared that other enemies were still at large, particularly the Communists and anarchists (people who seek to destroy governmental authority) who had talked of overthrowing the government of the United States ever since the Bolshevik Revolution had engulfed Russia in 1917.

The dangerous leftists of Bob Jones University Press downplay the Red Scare as a "temporary panic" sparked by "a few anarchists" who sent mail bombs to government officials, but managed only to injure two people (a senator's wife, and the family's housekeeper, whose hands were blown off when she opened the bomb -- which is very bad). It also notes the larger, deadlier bombings that followed, but says that the Red Scare largely abated after a much feared "Red revolution" failed to materialize on May Day 1920. So there you go: Bob Jones University Press, soft on the International Communist Conspiracy.

As for those charming homegrown American radicals, the KKK, Land I Love gives them only this brief paragraph, without any particular detail or explanation:

During the 1920s, the Ku Klux Klan movement spread throughout the South, Midwest, and Far West. By 1923, it boasted a membership of 5 million. Whenever Klansmen felt the law was slack or slow, they took the law into their own hands, denying the due process of our legal systems. The Klan’s use of threats and violence against whites and blacks began to disturb many Americans. After 1924, Klan membership rapidly declined. By 1930, the Klan had only about 9,000 members.

U.S. History, on the other hand, managed to write a couple of sentences about the Klan that managed to get cited in any number of articles, and which was part of the reason we started this very feature over a year ago. In August 2012, Mother Jones cited this line as an example of the stuff to be found in rightwing Christian textbooks:

"[The Ku Klux] Klan in some areas of the country tried to be a means of reform, fighting the decline in morality and using the symbol of the cross. Klan targets were bootleggers, wife-beaters, and immoral movies. In some communities it achieved a certain respectability as it worked with politicians." -- United States History for Christian Schools, 3rd ed., Bob Jones University Press, 2001

It's a pretty awful passage, but dammit, MoJo, it really does need to be looked at in context, where it's still dreadful but not the wholesale "The KKK was A-OK" endorsement the Mother Jones piece suggests.

It's bad enough as it is; the discussion of the Klan is embedded in a larger section on nativism, noting the anti-immigrant fears that contributed to and were exacerbated by the Red Scare, and which led to the exclusionary National Origins Act of 1924 -- of which the textbook says, "Clearly the government wanted to preserve America from a threat to its Anglo-Saxon heritage." This leads to a brief discussion of the Great Migration of blacks from the South to the industrial cities of the North, with a glancing mention of the Harlem Renaissance, even. And then we get to the section on the KKK:

The rapid social changes of the 1920s caused some Americans to react with violence. Fear of immigrants and blacks led in 1915 to the revival of the Ku Klux Klan, patterned after the organization founded during Reconstruction. Promoting "100% Americanism" and limited to native-born white Protestants, the Klan resembled a fraternal order complete with ritual and ceremony. Through skillful promotion the Klan expanded nationally from the South through the early 1920s, becoming a strong social and political force in many of the northern cities where immigrant and black populations were rising ... Feeding on bigotry and racism, the Klan’s organizers resorted to intimidation and violence to keep blacks, Catholics, and Jews "in their place."

It should include far more details about the realities of what the Klan was about (and probably should have included a mention of the role The Birth Of a Nation played in the Klan's resurgence), but that paragraph is certainly not bland approbation of the KKK. In its full context, the bit quoted by Mother Jones is doing some other dirty work as well:

Paradoxically, the Klan in some areas of the country tried to be a means of reform, fighting the decline in morality and using the symbol of the cross. Klan targets were bootleggers, wife beaters, and immoral movies. In some communities it achieved a certain respectability as it worked with politicians. The 1924 Democratic National Convention refused, by a narrow margin, to condemn it by name. A secret organization, the Klan’s membership reached several million according to some estimates, but that number declined after the mid-1920s. The 1924 immigration restriction law reduced the number of immigrants and the fears they generated. Also, the Klan’s use of violence alienated mainstream America, and a sex scandal among the Indiana Klan leaders made a mockery of the Klan’s moral crusade.

So there's some interesting stuff being accomplished here -- on the one hand, Klan = Racist and Violent and Bad. On the other hand, the Klan aimed for air of respectability, and even fooled the Democrat party into supporting them -- no mention, of course, of the tensions between the southern segregationists who killed the condemnation, and the reformers who wanted to condemn it in the first place. And finally, of course, the wise American People eventually saw through the Klan, whose moral crusading was a sham.

Also, thanks one hell of a lot, Mother Jones, for making us defend Bob Jones Freakin' University Press. It's a superficial discussion that should have said more against the KKK, but the section as a whole is definitely not lauding the Klan as good guys. If we're going to make distinctions between liberals, socialists, and commies, we should also make a distinction between "pro Klan" and "condemning the KKK, but insufficiently so -- and with a gratuitous suggestion that Democrats are pro-racism." Both are intellectually dishonest, but we'd say the distinction matters. (Note to conservative readers: Please summarize the above as "BOTH SIDES DO IT!")

Next Week: How about a nice dose of Monkey Trial?