Sundays With The Christianists: American History Textbooks That Will Protect Your Homeschooler's Precious Bodily Fluids 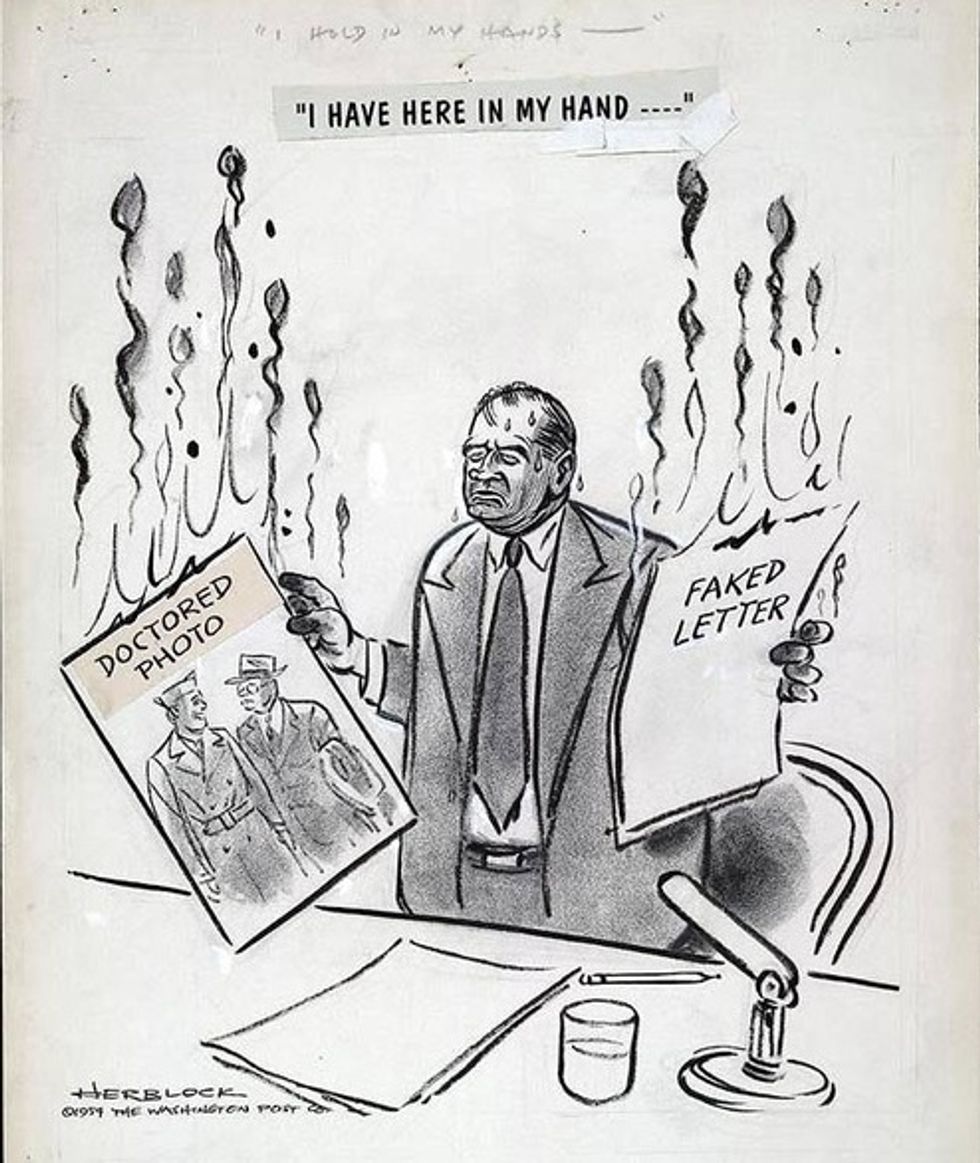 Yay for the 1950s! One of the best times in America, according to our textbooks for Christian schools, though of course theGilded Age was pretty darn awesome as well. Our 8th-grade textbook, America: Land I Love (A Beka, 2006), has no doubt it was a terrific time:

Living in a country that rewarded hard work with increased wages and profits, parents worked hard to provide for their children ... A strong moral and spiritual foundation undergirded America’s prosperity. Americans still practiced the Protestant work ethic, taking pride in their work and striving for excellence. The moral values of Biblical Christianity provided a just standard of law, order, and mutual respect, which in turn increased material prosperity.

Our 11th/12th-grade book from Bob Jones University Press, United States History for Christian Schools, is a bit less boosterish; it attributes the postwar prosperity to America's industrial base being unscathed by WW II, and notes that Cold War defense spending helped fuel much of the boom, though the high marginal tax rates on the rich somehow never get mentioned by either book.

But all this prosperity and happiness for all Americans (just shut up about Jim Crow, please, we'll get to that next week) was threatened by the menace of hordes of Communist infiltrators who were definitely everywhere, according to Land I Love, or at least real and very dangerous, according to U.S. History. So please raise your right hand and swear your loyalty to God, the flag, and John Wayne, and let's go bait some Reds.

U.S. History, as it does so often, holds back just a little bit from frothing at the mouth, and even hints that the Red Scare of the 1950s involved both real communist activity and paranoia about communists:

Many Americans blamed subversives in their own government for Soviet advances, and several events in the postwar era gave credibility to the charge. The most sensational case involved Alger Hiss, a former State Department official. In 1948 Whittaker Chambers, a former Communist, went before Congress and accused Hiss of passing secret documents to him ten years before when Chambers was a Soviet agent. Hiss could not be tried for espionage, since the statute of limitations had expired, but he was convicted of perjury when he denied the accusations under oath. The Hiss case also launched the political career of Congressman Richard Nixon, whose aggressive work eventually sent Hiss to jail.

Yay, Richard Nixon, you dogged investigator, you! (As with any mention of Ol' Dick, this is where we remind you that if you haven't read Rick Perlstein's Nixonland, you are missing out, the end.) Land I Love is much more certain about the extent of commie infiltration, and a bit less worried about nuances like the differences between convictions for "espionage" and for "perjury":

During the Cold War between the United States and Soviet Union, acts of Communist espionage (spying) were more widely investigated. State Department official Alger Hiss, adviser to President Roosevelt at Yalta, was convicted of perjury (lying under oath) in 1950. Hiss had passed State Department secrets to a Soviet agent. His guilt probably would have remained undetected had it not been for the testimony of Whittaker Chambers (1901- 1961), a former Communist party member and Soviet spy. Chambers turned against Communism when he realized its true nature. He explained:

We like the structure of that first paragraph, which manages to imply that Hiss was passing secrets at the Yalta conference without actually asserting it. Land I Love also treats us to a breathless recitation of this dramatic event:

Chambers led investigators to a pumpkin patch on his farm, reached into a pumpkin, and pulled out microfilmed copies of secret State Department documents, which he had received from a spy ring of which Alger Hiss was a member.

Not mentioned, of course, is that Chambers hid the "pumpkin papers" himself, claiming that he'd had to protect them from "Hiss forces" who were on the verge of stealing them, because that might sound kind of silly.

And then there's the trial of Julius and Ethel Rosenberg; both books take it as a given that the Rosenbergs conspired to give the USSR secrets that hastened the development of the Soviet atomic bomb by 1949; there is of course no mention of the disputed nature of that claim, especially the notion that the information Julius Rosenberg provided was critical. U.S. History does take care to completely dismiss the possibility that the charges against the Rosenbergs were exaggerated in any way:

Many left-wing writers have tried to make the Rosenbergs "martyrs" of the Red Scare, victims of paranoid hysteria. The facts, though, reveal that the Rosenbergs were guilty of one of the greatest acts of treason in American history -- they had given a totalitarian nation the most destructive weapon in history.

No way would the USSR have ever figured out nuclear fission without their help.

The books diverge on the career of "Tailgunner Joe" McCarthy; U.S. History largely holds him at arm's length, noting that a Senate investigation of his claim that the State Department was riddled with Communist agents "concluded that the charges were 'a fraud and a hoax,'" and even giving credit to President Truman, which may mean that there are communist sympathizers on the editorial board at Bob Jones University Press:

Despite his well-publicized investigations, the senator never found a single Communist in the government. (This failure was in part due to Truman’s previous success in rooting security risks out of the government.) By the end of 1954 McCarthy’s charges had become increasingly irresponsible, and his Senate colleagues censured him for his conduct.

On the other hand, U.S. History has this take on the real harm that McCarthyism did to America -- it wasn't so much that paranoids ruined lives and ran roughshod over civil liberties, but that McCarthy's broad-brush attacks obscured the actual threat:

What was often ignored in the outrage over McCarthy’s methods was the reality of the Communist threat in America. By his exploitation of the Communist issue, McCarthy probably brought genuine anticommunism into disrepute.

And who were the serious conservative heroes of anticommunism whose lights were outshone by McCarthy? Not surprisingly, they've got mainstream conservatives -- William F. Buckley, Jr., Robert Taft, and Barry Goldwater -- but they also include, without a heck of a lot of criticism, some other activists:

Some conservatives went further. In 1958 Robert Welch founded the John Birch Society, named for a Baptist missionary killed by Chinese Communists at the end of World War II. The Birch Society held that Communist subversion affected high public officials in the country, and it questioned the patriotism of those who pursued the policy of peaceful coexistence with the Soviet Union.

So there's your important distinction. Joe McCarthy: too extreme and made anticommunism look bad; John Birch Society: "went further" than William F. Buckley and other Republicans in their anticommunist fervor, but otherwise pretty nice guys.

In contrast, it would be safe to say that Land I Love "goes further" than U.S. History on McCarthy's significance. In 1950, we learn, McCarthy "charged that the U.S. State Department had been infiltrated by large numbers of Communist spies" -- no mention of the Senate probe that concluded the charge was hooey -- and for that matter, neither book mentions that the supposed number of Communist infiltrators changed every time McCarthy claimed to have a list. Rejecting such weak verbs as "claimed" or "accused," Land I Love just plain says that McCarthy found the facts:

Between 1951 and 1954, Senator McCarthy conducted investigations into Communist activities within the federal government. He also discovered teachers, writers, and actors who were, or had been, members of the Communist Party in America (CPA). By 1952, McCarthy had evidence of several Communist spy rings operating within the U.S. government.

Dude was on a mission, and J. Edgar Hoover even backed McCarthy up and "revealed" that some government employees got security clearances "even though the FBI warned of their Communist activities." Strangely, however, the book doesn't mention any prosecutions of these probable traitors.

And then there's the event that most texts -- even U.S. History -- present as McCarthy's downfall: his televised hearings into supposed infiltration of the U.S. Army by communists. For the sake of contrast (and maybe as evidence of liberal bias in the public schools), let's take a look at how The American Pageant (Wadsworth, 2013), Kid Zoom's textbook for AP History, discusses McCarthy's downfall:

McCarthy finally bent the bow too far when he attacked the U.S. Army. The embattled military men fought back in thirty-five days of televised hearings in the spring of 1954. The political power of the new broadcast medium was again demonstrated by the Army-McCarthy hearings, as up to 20 million Americans at a time watched in fascination while a boorish, surly McCarthy publicly cut his own throat by parading his essential meanness and irresponsibility. A few months later, the Senate formally condemned him for "conduct unbecoming a member." Three years later, unwept and unsung, McCarthy died of chronic alcoholism. But "McCarthyism" has passed into the English language as a label for the dangerous forces of unfairness and fear that a democratic society can unleash only at its peril.

Talk about inflammatory and biased! Why, they even suggest that McCarthy was some kind of drunkard! (OK, so he was, but still...) Neither of our Christianist books cites Joseph Welch's famous "Have you no decency?" speech; the comsymps who wrote American Pageant give it a text box of its own.

To help offset such perfidy, which is all too prevalent in the indoctrination camps of the Government Schools, Land I Love sets the record straight:

Because the Senate decided to allow television coverage of the Army-McCarthy hearings, millions of Americans were able to watch these hearings. Although many Americans supported Senator McCarthy, liberals, the press, and labor union leaders denounced "McCarthyism" and accused him of conducting a "witch hunt." The power of television was so great that McCarthy’s sarcastic manner and stern face gave him a poor public image. Many who watched the hearings saw him as a bully rather than a patriotic American. The main points of his message were never disproved or denied and were later verified to be true, but public hearings and attacks from news reporters hurt McCarthy’s image with many people, and in December 1954, the Senate denounced McCarthy.

We never find out any details on who those communists in the Army were, but rest assured, no one has ever proven that they weren't there, either. And as always, the liberal media and the labor unions were incredibly powerful in influencing a public that actually rejected their message but somehow believed it enough that poor Joseph McCarthy, a good Patriotic American who was just trying to save his country from tyranny, was brought down. Lesson: Patriots will always be victims.

Next Week: The beginnings of the Civil Rights Movement, although it probably wasn't needed since liberals have exaggerated how bad racism was, and Jim Crow was a Democrat invention anyway.

Bonus reading for History Nerds: Check out this CNN story on the 1864 anti-Lincoln rumormongering campaign that gave American politics the word "miscegenation." Turns out that electoral ratfucking wasn't invented by Karl Rove after all.

Follow Doktor Zoom on Twitter. he is not now, nor has he ever been, a user of the phrase "party hardy."