Sundays With The Christianists: American History Textbooks To Smite The Dreaded Hun 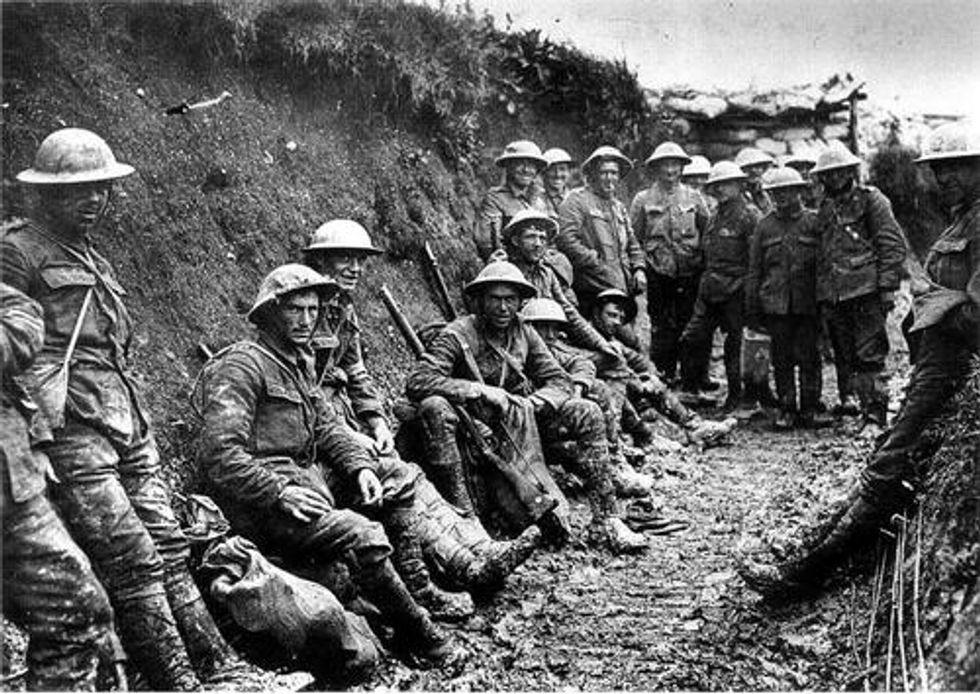 As we've noted before, there's one element of history where our textbooks aimed at the Christian homeschooling market actually manage to be fairly accurate: for some reason, they're able to discuss wars without bringing very much Godstuff into the discussion. They're happy to sermonize about the run-up to wars, the consequences of wars, and the long-term significance of wars, but somehow, the actual battles and maneuvers don't seek to invoke any divine interventions. And so it is with The Great War: once you're talking about who did what and where, these books are largely indistinguishable from secular textbooks.

On the other hand, there are little nuggets like this, from our 8th-grade textbook, America: Land I Love (A Beka, 1994):

In the early 1900s, while America continued to enjoy the fruits of spiritual revival, the spiritual condition in Europe was alarming. The ideas of Darwinian evolution and Marxist socialism had become popular in Europe, and the cold, formal state churches of Europe offered little resistance. Evolutionists presented man as an animal, failing to recognize the sanctity of human life. Socialists and Communists reinforced evolution by promoting atheism and violent revolutions as in Russia (1917) to guarantee the "survival of the fittest."

In 1914, spiritually bankrupt Europe found an excuse for war when, in the tiny country of Bosnia, a young Serbian terrorist shot and killed the heir to the throne of Austria-Hungary, Archduke Ferdinand, and his wife

Having established that secularism and Darwin, plus a lack of evangelical zeal, had led Europe to moral weakness, the book then gets on with the srs bsns of all those entangling alliances and battles, and we don't hear any more about European moral rot. In a war that involved mass infantry and cavalry charges into barbed wire and machine-gun nests, poison gas attacks, and criminally incompetent British generals, you'd think they'd find something to condemn, maybe. But there are several nice maps.

As usual, our 11th/12th-grade text, United States History for Christian Schools (Bob Jones University Press, 2001), plays the saner older brother, with no talk at all of Europe's spiritual bankruptcy. Instead, we get a pretty solid look at the tensions and alliances that led to the war; one of the few hints that this is a Christian textbook are a paragraph emphasizing that Woodrow Wilson was the son of a Presbyterian minister who "instilled in his son sturdy moral convictions and a strong belief in God's sovereign direction in the universe." The book notes that

Wilson the president brought this moral vision to his foreign policy-making. He sought to make the United States the moral leader among nations, believing that America’s role in the world was to promote democracy and peace by example and persuasion.

We're not sure what the editors make of Wilson's failure to actually translate that moral suasion into actual peacemaking; they don't exactly label it naïve, because you know, he was trying to be Christian, but they're clearly far more impressed with military victories. Praying and persuading is nice and all, but armies get shit done.

Both texts also include biographical sketches of Sergeant York, proudly pointing out that Alvin C. York had become a Christian at a revival meeting shortly before the war and struggled with whether a Christian could kill, even in war. Happily, he decided he could, and so, in the spirit of Christ's love, he killed 25 Germans and scared a German officer into surrendering with 132 soldiers and 35 machine guns. It's OK, he got the Medal of Honor, and the possible moral questions are easily sidestepped -- the man was an American hero, and so of course Jesus was delighted.

U.S. History does at least acknowledge the extremes of propaganda in the war, noting that many stories of German atrocities in Belgium were invented by British intelligence, and that Americans got more than a little swept up in war fever:

The national fervor for the war effort understandably led to widespread anti-German sentiment. Courses in the German language were dropped from many high schools, and "liberty" replaced virtually everything connected with the hated Hun. As a result, German measles became "liberty measles," German shepherds were renamed "liberty dogs," and patriotic palates that had lost their taste for sauerkraut were doubtless relieved to discover "liberty cabbage."

"Understandably"? You betcha. Similarly, U.S. History notes that the Espionage and Sedition Acts resulted in plenty of unfounded prosecutions, but such excesses are easily explained by vigorous handwaving: "These acts must be understood in their wartime context," because there actually were some acts of sabotage. This is the same crowd that, in other contexts, is so fond of trotting out that Benjamin Franklin line about how anyone who'd "give up essential Liberty, to purchase a little temporary Safety" deserves neither. But hey, context. Plus, those unjustly prosecuted were dangerous leftists like Eugene V. Debs, convicted for opposing the draft. While Debs is mentioned elsewhere in both books, his imprisonment for speaking against the war isn't worth mentioning in either book's section on the Espionage and Sedition Acts.

As was the case in A Beka's World History textbook, there's not a word in either book about the 1914 "Christmas Truce," when British and German troops spontaneously came out of the trenches for a day of unauthorized Christian not-killing-each-other. You'd think there'd be something to learn from that, maybe. Then again, it might suggest that disobedience to one's superiors can be a good thing; don't want to encourage that.

Weirdly, neither book injects Reagan-era Culture War politics into its discussion of Wilson's failure to convince the U.S. Senate to ratify the League of Nations. With all the anti-U.N. paranoia in the Christian right (which certainly surfaces in these books' post-WWII chapters), we'd have expected more praise for the brave senators who rejected Wilson's proposal. Instead, Land I Love is satisfied with a brief line about Senators who feared that the League would "surrender American independence and drag us into future world conflicts," and then immediately moves on to Wilson's 1919 stroke and decline. Where's the triumphalism, guys?

Happily, now that the textbooks have shuttled the young folks through WWI without having to dwell on any of the messy realities of trench warfare or gas attacks (topics my son's secular high school textbook includes, along with a Wilfred Owen poem), they can get back on track in their next chapters, with juicy stuff like the moral decline of the 1920s, the Red Menace, and the Scopes trial. Civilian culture wars are much more fun to fight, what with not having to scrape quite so many maimed bodies off the battlefield.