Sundays With The Christianists: Homeschooled American History That's Almost Like The Real Thing 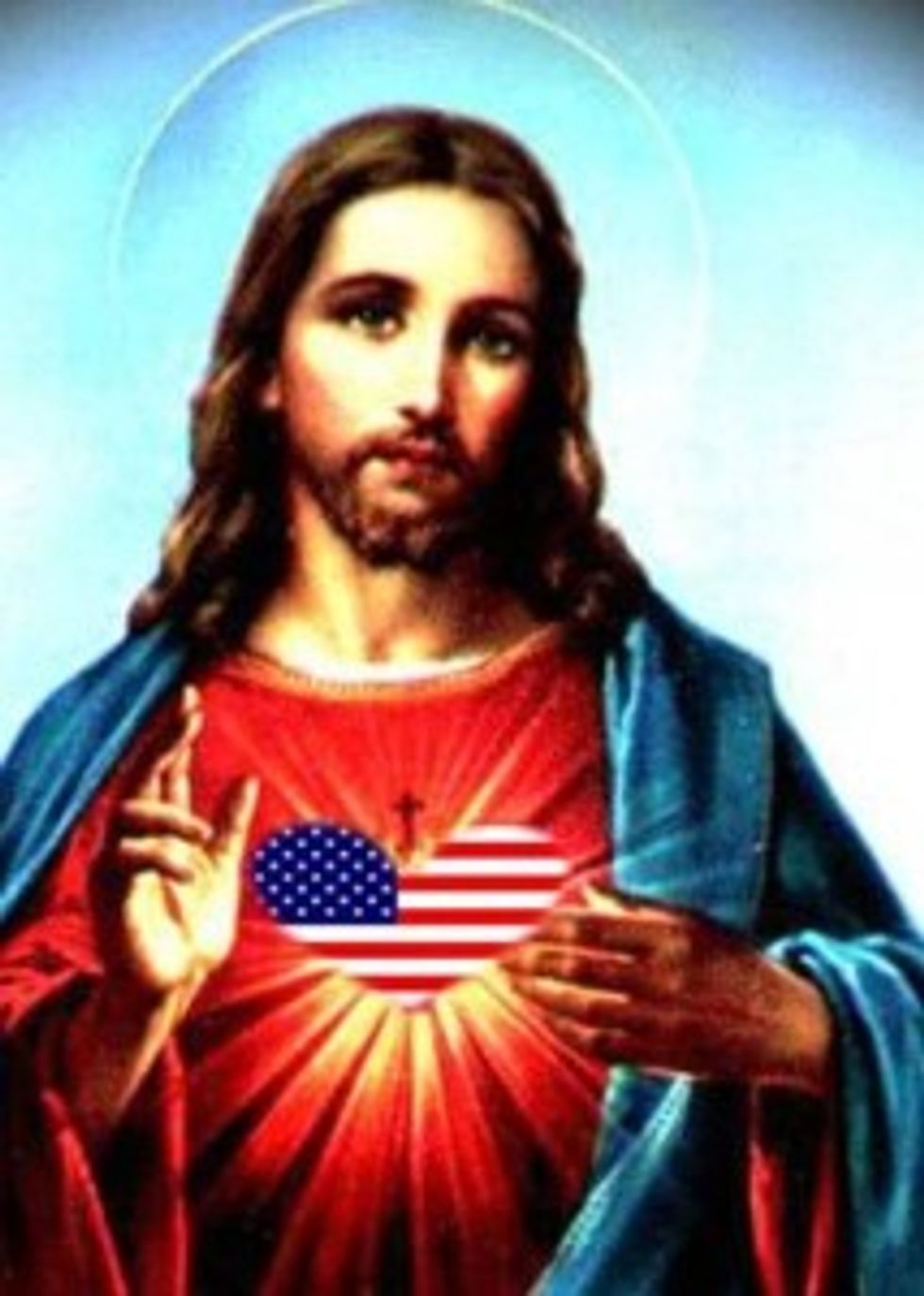 After all the sex and excitement of theRevolutionary War and the writing of the Constitution, our American History textbooks for Christian schools present us with something of a challenge: there's just not all that much crazy for them to say about the following few decades of history. Sure, there's a lot of stuff that has to go on the test, but when's the last time you got wrapped up in an argument about the Monroe Doctrine or the X Y Z Affair? And so our Christian textbooks manage to get through stuff like the Louisiana Purchase and the War of 1812 without any particular fuss. Still, when comparing these books to secular textbooks, you develop a Vincent Vega-like appreciation of the little differences, like their discussion of Thomas Jefferson's heresies, or their condemnation of Native Americans' being led astray by "superstition."

Our 11th/12th grade text from Bob Jones University Press, United States History For Christian Schools, devotes a full-page text box to Jefferson's religious views, noting that his election in 1800 prompted some New England Christians to start "hiding their Bibles for fear that government agents would seize them" because Jefferson was reputed to be "an atheist and enemy of religion." Rather than examining this paranoid streak in American Christianity, the observation is merely a springboard for a discussion of the many ways in which "Thomas Jefferson was no orthodox Christian."

And to their credit, the authors even quote -- disapprovingly of course -- some of Jefferson's more outrageous ideas, such as this opinion of the virgin birth that he shared in a letter to John Adams:

"The day will come when the account of the birth of Christ as accepted in the Trinitarian churches will be classed with the fable of Minerva springing from the brain of Jupiter."

We also learn about Jefferson's cheerfully eclectic re-making of scripture:

While president, Jefferson began to compile his own version of the "true" teachings of Jesus. Using scissors, paste, and two English and two Greek New Testaments, Jefferson literally pieced together an account of Jesus` life and teaching, an account shorn of every miracle and every reference to Christ as God. The resulting work ... limited itself almost entirely to the moral teachings of Jesus. Jefferson read from his edition nearly every night and called it "a document in proof that I am a real Christian, that is to say a disciple of the doctrines of Jesus."

We are kind of in love with the little rhetorical pivot in the section's summary, which starts off sounding smilingly tolerant, and then pounds kids with heavy theological artillery:

Thomas Jefferson was an outstanding political thinker and statesman. but his religious views demonstrate that not all great Americans were necessarily Christians. American believers can appreciate Jefferson's rich contribution to the development of their nation, but they must beware of his view of Christ as a good teacher but not the incarnate Son of God. As the Apostle John said. 'Who is a liar but he that denieth that Jesus is the Christ? He is antichrist, that denieth the Father and the Son" (I John 2:22).

"Thomas Jefferson Antichrist" -- yet another fine rock band name from our studies. Still, we'd rather see these guys accurately portray Jefferson as unfriendly to their cause; it's far more honest than more recent efforts by David Barton to enlist Jefferson as an ally, a claim so widely ridiculed that Barton's own publisher eventually pulled the plug on Barton's aptly-titled The Jefferson Lies. (Needless to say, Glenn Beck still has a raging chubby for Barton, who was a featured speaker at Beck's recent AmericaPalooza).

Our other curiosity this week comes from a frontier episode that Yr Doktor Zoom had actually never heard of. It's in both of our Christian textbooks; we'll start with the account from U.S. History since it includes some useful details. In 1806,  the governor of the Indiana Territory, William Henry Harrison -- who was more cold-resistant in those days -- had a run-in with the brother of the Shawnee leader Tecumseh. After some almost admiring descriptions of Tecumseh's political maneuvering -- he sought to unite American tribes into a single government, and told Harrison "that he was simply following the example of the United States in joining his people into one nation" -- the focus shifts to Tecumseh's brother and the religious movement he led. Neither book bothers with his name -- Tenskwatawa, maybe because too many syllables, maybe because Just A Savage -- instead going with his self-proclaimed title of "The Prophet." He was a charismatic religious fanatic, your basic wild-eyed religious nut with Big Visions, only not Christian, so scary. As U.S. History tells it, Harrison pretty much handed Tenskwatawa his greatest symbolic victory by getting all sarcastic about his claims to cosmic knowledge:

When the Prophet began to win converts among the tribes of the Northwest, Harrison unwittingly played into his hands. The governor sent a message to the Indians, urging them to reject this so-called prophet. He said,

"Demand of him some proofs at least of his being the messenger of the Deity .... If he is really a prophet, ask of him to cause the sun to stand still -- the moon to alter its course -- or the dead to rise from their graves. If he does these things, you may then believe that he has been sent by God.

The message backfired. Somehow (perhaps through British agents in Canada), the Prophet learned of a total eclipse of the sun that was to occur in 1806. The Prophet announced to every Indian he could reach that he would indeed make the sun stand still. The Indians were awed when the Prophet announced, "Behold! darkness has shrouded the sun," and the sun apparently did vanish. Multitudes flocked to Tecumseh and his brother.

Count us amazed -- we thought that Samuel Clemens had made that trope up himself for Connecticut Yankee.

And now the fun part: In its version of the story, our 8th grade textbook, America: Land I Love, doesn't mention Harrison at all until he leads the 1811 defeat of Tecumseh and Tenskwatawa at the Battle of Tippecanoe. Instead, the whole story is framed with the heading "Superstition Leads to Disaster" and paints "The Prophet" as a "cult leader" whose one weird eclipse trick was merely cynical manipulation of simple, gullible fools:

Of course, the superstitious tribes did not know what caused the eclipse, but it appeared to them that the Prophet had power over life and death.

The textbook goes on to mock Tenskwatawa's "superstitious" followers for believing that the New Madrid earthquake of 1811 "was a sign from their gods" that signaled that it was time "to massacre American settlers." Silly Indians! Anybody knows that natural disasters are a sign from the Christian God -- remember, in an early chapter, Land I Love also cited the storm that contributed to the defeat of the Spanish Armada as proof of God's preference for English Protestantism. Not that there's any hypocrisy there -- savages have superstitions and sneaky leaders, while Christians have Providence and faith healings.

Next Week: Slavery, which may or may not have had something to do with the Civil War. (Spoiler alert: these books may have been written by commies, since neither calls it "The War Of Northern Aggression.")