Sundays With The Christianists: Sex Education That Knows Just How Very Naughty You've Been 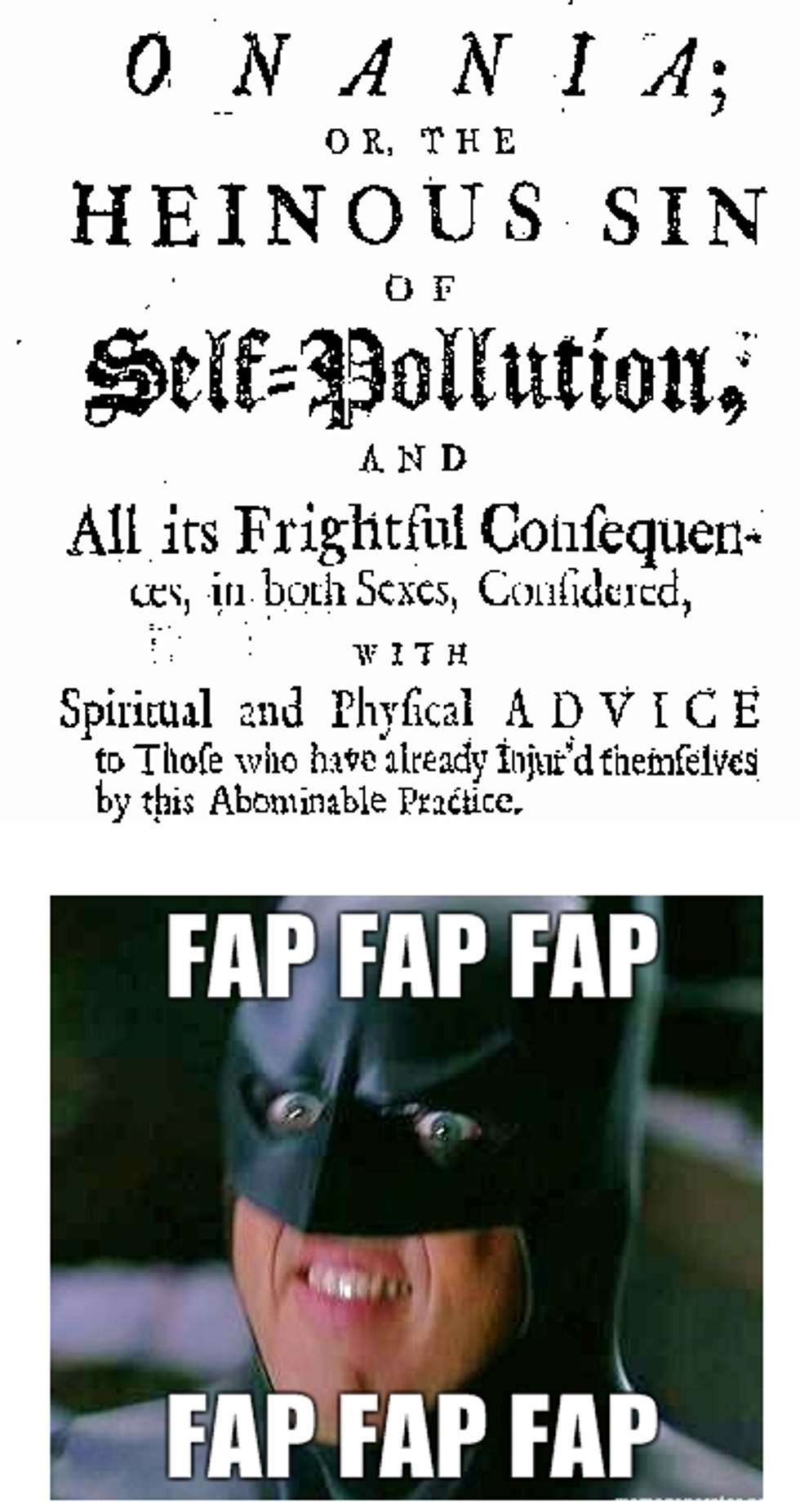 First off, a word for poor old Onan, the minor Biblical character (Genesis 38:6-10) who God struck dead for interruptussing his coitus, got a "heinous sin" named after him, and was finally redeemed when Dorothy Parker said she named her parakeet Onan, "because he spills his seed upon the ground." (There's also a brand of small gasoline engines named Onan -- they're one-cylinder engines, you see. The company was -- and we swear we are not making this up -- eventually taken over by Cummins.)

But where most early rabbis saw Onan's real sin as not living up to the weird marriage duties of the day -- he had to marry his dead brother's wife, and his seed-spilling left his brother's line without an heir -- later Christian interpreters of the passage decided that the much worser sin was Onan's willful refusal to go forth and multiply, which is at the heart of why the Pope still says you can't wear little rubber devices to prevent issue.

And that's why you shouldn't be 'bating, either: because you are not making precious Christian babies, you degenerate. Also, all that fapping will make you feeble-minded, a medical crisis which the Victorians took pains -- literally -- to prevent. Yes, that device in the photo goes exactly where you fear it might. (Thanks to C_R_Eature for that link!)

Our Christian Sex Ed books have a few things to say about flogging the bishop and polishing the pearl, too. The less medieval of the two, Stan and Brenna Jones' Facing the Facts: God's Design for Sex, notes that the Bible doesn't say anything specifically about self-pleasuring. But since there's pleasure involved, and you still have a heartbeat, they do feel compelled to warn you that sin is right around the corner:

Jesus does condemn lust. He says committing adultery with our bodies is wrong, but committing adultery in our hearts is wrong also...Many people who masturbate don’t just touch themselves for pleasure; they also imagine sexual ideas and pictures, like having sex with a person in their class at school. This command of Jesus not to let lust dominate our life probably means that it is not a good thing for a young man to let his heart be dominated by thoughts of having sex with women that he knows, or for a young woman to think in the same way about men that she knows.

Still, the Joneses conclude this section with a paragraph that strikes us as far less wankophobic -- or perhaps just resigned to reality? -- than anything we ever heard during our own Papist upbringing:

Pyle does warn that Jesus is watching the insides of our heads all the time, so if thoughtcrime is banned, then presumably, handcrime or dildocrime would also be right out:

God knows our thoughts. We must guard our thoughts if we would remain sexually pure. What do you think about when your mind is in neutral? If a person truly repents of sin, that person will have to forsake evil thoughts to receive God’s blessing every day.

Most sexual wrongdoing starts first in the mind or in the thoughts. The thought life is where the trouble usually starts. "As he thinketh in his heart, so is he" (Prov. 23:7)... God can help us "cast down imaginations ... and bring into captivity every thought to the obedience of Christ" (2 Cor. 10:5). We can control our thoughts if we seek the Lord’s help.

People dredge up dirty jokes and foul language from a rotten and unclean heart where putrid thoughts originate. This is one of the evils of pornography. To look upon that which is nasty and unclean soon graduates from the eyes to the mind and thoughts. If our thoughts are corrupt and evil, we soon will become utterly corrupt.

A couple of paragraphs later, we get one of the more awesome passages in the whole book:

So do not let your thoughts dwell on that which will create lust. Lust is the slimy serpent that will lead down the path of sin and death.

Read good books. Pray about all things, particularly as you begin your day. Make much of your Bible, and dwell upon its wonderful promises. Listen to wholesome and good music, and discipline those pleasure hours.

OK, we take it back. Only a chronic masturbator could come up with that "slimy serpent" stuff.

Sundays With the Christianists is going to celebrate its six-month anniversary by taking next week off, after which the feature will return with a look at an 8th-grade Biology book from Bob Jones University Press. This text made a bit of history when it boldly declared that if God's Word and the apparent physical evidence disagree, then scientists need to fix their obviously wrong theories to make the evidence agree with God's Word.

And don't forget, Your Wonkette Book Club has a new selection: Al Capp: A Life to the Contrary, a biography of the cartoonist / satirist behind L’il Abner. Available in hardcover for $16.66 or Kindle e-book for $13.43 -- buy using those links for a happy kickback to Your Wonkette!