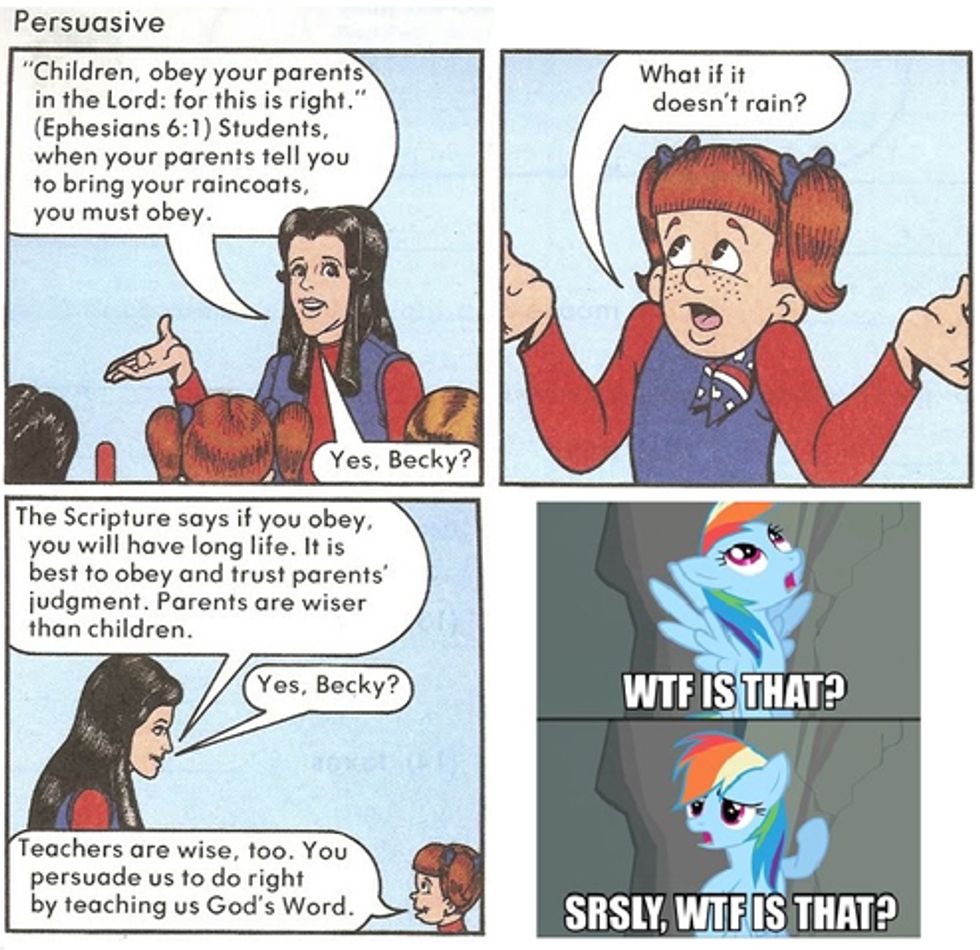 Good morning, Wonkatarians! Today, a bit of a departure! As it happens, within the last couple weeks Yr Doktor Zoom's gotten a few emails and comments that we thought needed to be shared with The Readers -- and for a change, they're not of the "Dear Shit Fer Brains" variety. And so we are in the really weird position of sharing reader mail without mocking it. We think we will manage, somehow. So, next week we'll get back to our Christianist history books, but this week, we're going to hear from a few folks who went to schools that used similar textbooks, and survived. This has been a running question for this whole series -- when kids grow up with this stuff, what happens when they run smack into the wider world where most people don't think Jesus rode the Loch Ness Monster?

Our first communication comes from "Monique," and was originally a comment on our "Sundays" post from a couple weeks back. Unfortunately, since Monique was a new commenter, we didn't find it in the comment queue until Tuesday, by which time very few people were likely to go back and read the previous Sunday's comments. So we emailed Monique to ask if we could use her comment in the actual column, and to add whatever other information she might want about her school experience. It gets to a lot of what we've been looking at in our weekly visits to fundamentalist textbooks.

Monique went to a K-12 Christian school in fundamentalist mecca Colorado Springs, and says that her early education left her with lots of gaps in basic knowledge: "I am still struck with alarming frequency at how much knowledge most people take for granted that I lack." Her school mostly used textbooks from A Beka, but despite all the indoctrination on ideological grounds, the rote approach to learning didn't quite prepare her to be much of a spiritual warrior:

A Beka didn't prepare me to valiantly fight secular humanists on ideological grounds and annihilate them with the sword of truth. What it did was make me realize, when I encountered such people, that I was wholly unequipped to win arguments or even converse as an intelligent, educated person, because the foundation I'd received was so disconnected from reality, history, proof, logic, and the most basic understanding of "the other side" (because of course there are only ever two sides, God and Satan)

They give you a set of arguments that "the other side" -- be it evolutionists, liberals, socialists, progressives, environmentalists, feminists -- allegedly uses (most of which I've never encountered, certainly not in the form in which A Beka spells them out) and tell you how to refute them. It's basically, "They say A, you say B, and they'll respond with C." As soon as someone goes beyond that narrow scope, though, you've lost the argument; you lack the knowledge and critical thinking skills to defend your position, because A Beka has done their level best to keep you from the information and kill your ability to think for yourself.

At the risk of falling into the confirmation bias trap, let's just say we're not terribly surprised to hear that from someone who went through it. (Ah, but the government schools make children sing songs of praise for Barack Obama. Both sides do it!) Monique also had this observation on a part of the curriculum that may sound familiar to folks who remember our look at that high school biology text from Bob Jones University Press:

[Our] jr high biology book had a little call-out about how evolution can't be proven via fossils. It included something like, "More than one evolutionist has thrown his hands up in despair and made the absurd claim that birds must come from dinosaurs, because he can't figure out how else they got here!" As soon as I read an actual book by a real paleontologist, I concluded that our A Beka textbook authors must be incredibly stupid, dishonest, or both.

In a follow-up email, Monique mentioned some other highlights from her school: English classes that were mostly Puritan sermons, but with a few Walt Whitman poems thrown in since liberal secularists think he's important and you'll need to pass entrance exams. The teachers warned that Whitman was a notorious homosexual and that no Christian should ever read his corrupting book Leaves of Grass -- "I read it, and I was terribly disappointed at how non-decadent it turned out to be," says Monique. And then there was the history class, taught by the principal from a three-ring binder, with this novel take on the War of Northern Aggression:

The thesis was that the American Civil War was pushed by northern secularists who hated Christians and wanted to destroy the South because it was the last great Christian stronghold in the U.S. They decided to gut the Southern economy so they could force public education on the South, therefore indoctrinating a new generation of children into "secular humanism."

That's actually pretty impressive -- it manages to make the "states rights" version of slavery and the Civil War in our two Christian textbooks seem pretty moderate by comparison.

She later attended a liberal Christian college where she learned that "it was possible to be a Christian and also a Democrat, a progressive, a feminist, a supporter of gay rights, an environmentalist, a socialist, a proponent of evolution, and a scholar who questions the Bible's inerrancy." She also noted that a lot of her high school teachers put a lot of effort into dissuading her from going to that school, since they thought her faith would be more threatened by doctrinally weak Christians than if she went to a secular school where she could be certain that all non-fundamentalists were Satanists. Even so, she recalls experiencing so much culture shock during her freshman year that she "struggled with this openness and actually filed a complaint about one professor who I thought was trying to undermine the Bible." We'd be willing to bet that the college got that sort of complaint pretty regularly, considering all the warnings about loose doctrine we've seen just in the few texts we've reviewed.

After all that, Monique describes herself today as in tune with progressive Protestantism, "although I'm very leery of the 'Christian' label because it has such negative connotations for so many people, myself included." And now here she is, reading Wonkette, which will surely be the last step in her corruption. (Come to the Dark Side... we have cookies.)

We also got a couple of comics from "Joshua," who was homeschooled from kindergarten through 11trh grade, using the Accelerated Christian Education curriculum that we looked at a few weeks back. Sadly, he said that he had long ago trashed the workbooks -- if someone wants to send Yr Doktor Zoom a bunch of those, we could have some fun, especially the English, social studies, and science ones. But Joshua did find these comics, which really give you a feel for the rote learning that Monique complained of:

And yes, that is exactly what the dialogue is like in every single example we've seen. Depressing thought: this tripe is a hugely successful business. And then there's this excerpt from what we're guessing is a high school civics or social studies lesson (full comic here):

Terrifying, isn't it? We love the complete awfulness of these, we really do -- not to mention the opportunity they might provide for Get Your War On -style remixes...

We also heard from Wonkette operative "ibnyamin," who recalls an eighth-grade text that "debunked the hell out of evolution," but when he got to college, he "started realizing that these arguments weren't just bad, someone had to know they were bad in order to make them":

I realized it was bull in a calculus class. We had a section that dealt with exponential decay and one of the problems was about carbon-14. I remembered an argument made in the Beka book to the effect that no fossils had ever been dated as older than 50,000 years using carbon-14, ergo the earth is young. Of course, with a half life of 5,700 years, there won't be measurable amounts of carbon-14 left after decaying for 50,000 years, but whoever made the argument up knew that, right?

We think that maybe you are being far too generous about their knowledge and motives, frankly. After all, since we know from Genesis that the earth is only 6,000 years old, those fossils should have plenty of carbon-14 in them. Since they don't, the method is unreliable, QED.

And finally, a note from "A.B." (No, not "Andrew Breitbart"), who graduated from a small private school in Florida in 2000, and recalls learning that while genetics is real science, evolution is "wrong and evil":

I remember that MICROevolution was ok, but MACROevolution was wrong, and stuff like: Noah's Ark as fact. Fossils as a disinformation tool (of the devil, maybe?). Universe (not just Earth) being 10,000 years old.

I didn't really question anything for a disturbingly long time. wasn't until I was about a senior in high school that I started to rationalize things like maybe God created the earth to look old or that he created light already on its way to us to offset things that are millions of light years away. I realized pretty quickly how ridiculous that notion was.

I went to college at a big public university and originally majored in physics. That convinced me of real science REAL quick and I started reading about some stuff that I already should've known.

Yep, we imagine physics would pretty much do it. A.B. also confirmed that, as we've seen in our textbooks, the Great Awakenings and various other waves of evangelistic fervor were pretty much the most important events in making America the great land that it is today.

And that's it for the current crop of communications from Survivors of Christianist Education -- if you have a memory of fundamentalist education that you want to send along, or any old Christian textbooks you want to donate to the Dok Zoom Library of Shame, or especially any examples of publications from Accelerated Christian Education, drop us a note at doktorzoom at wonkette dot com. Next week, back to our history books, where we will learn that Hitler came to power because European Christians had strayed from the Bible, and the American war machine was an example of the free market at work.