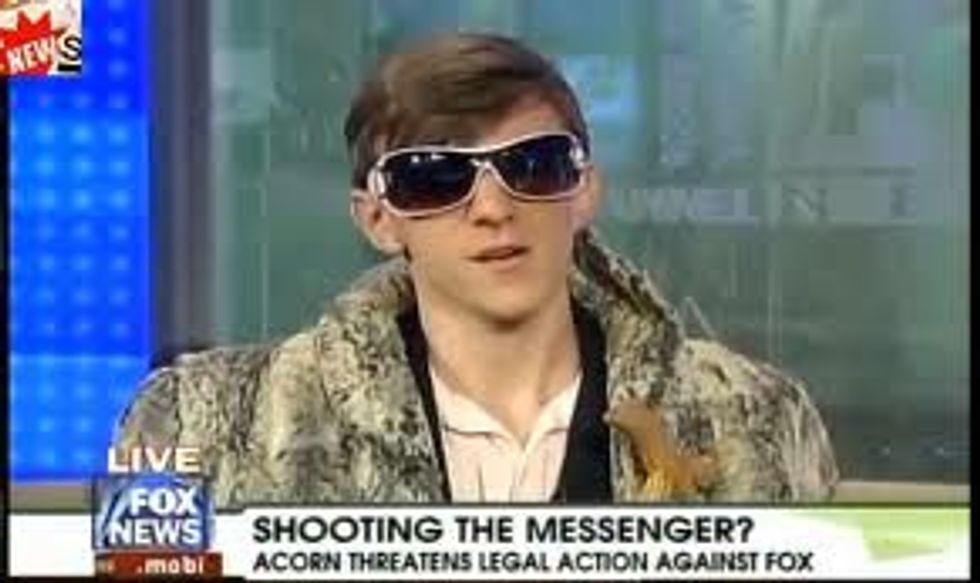 Just because you arebusy suing and getting sued by every partner you have ever had is no reason to ever turn your back for a second, James O'Keefe. That is when a newer, prettier, younger you will All About Eve you every time! So what super-slick moves is newest James O'Keefe apostle/role-stealer Mr. John Melvin Howting spinning on the dance floor? Nothin' much, he is just going around to Communist ACORN places and asking for help starting a union! Also, asking for help starting a union to bribe people. None of all the ACORNS were fooled by this, because it was moronic. Needz moar pimp hat!

Let us hear more about this now, for "context."

In New York, the Industrial Areas Foundation has organized for 30 years. With the help of Republican and Democratic mayors, it has built thousands of affordable single-family homes — a weirdly bourgeois affectation, that! It worked closely with the federal prosecutor Rudolph W. Giuliani to fight crime in East New York, Brownsville and East Harlem, and with Mayor Michael R. Bloomberg to construct a beautiful school campus in the South Bronx.

Manhattan Together is an I.A.F. affiliate, as is East Brooklyn Congregations. Mr. Howting visited both last week.

“I will say I had a gut reaction: Is this some sort of weird sting?” said Grant Lindsay, an organizer with East Brooklyn Congregations. “I figured I’m just naturally a little suspicious.”

Well kadooz to Grant Lindsay for having a "gut feeling" about a guy who asked things like:

If he formed a union, could his fellow workers join with the employer to shake down politicians for more money?

Anyway, the Industrial Areas Foundation was started by ... duh duh DUH ... SAUL ALINSKY. So "Top Conservatives of Your Ass" or whatever, by all means, get your editing equipment at the ready. Also, maybe some "suntan oil":

Mr. Howting was accused by fellow students of once slathering tanning oil on his face and trying to pass as a Latino liberal activist on campus.