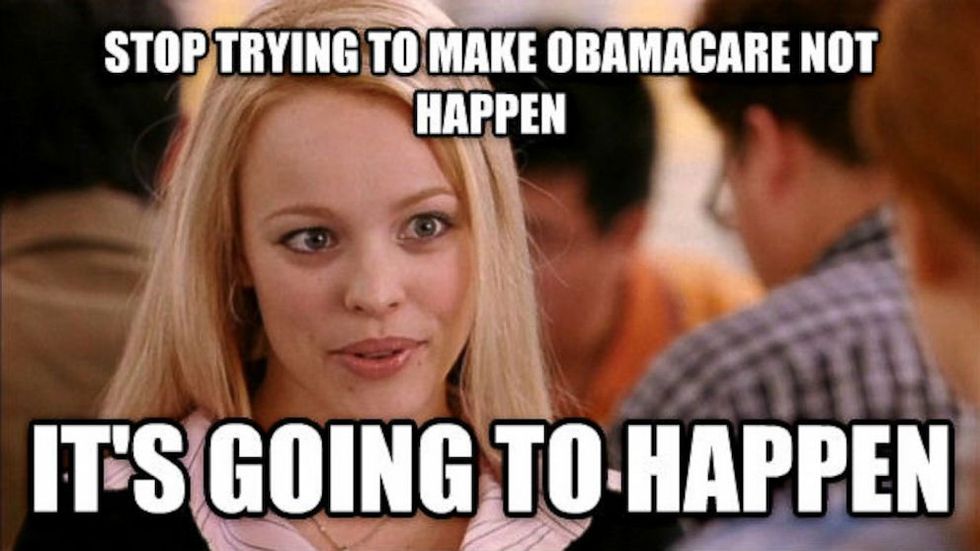 Hooray! Woot! Wheeeee! YESSSSS! All the sounds of celebration! The Supreme Court once again has said that yes, Obamacare is legal and constitutional and we can keep it and Jesus H. Christ on a crutch, STOP TRYING TO MURDER IT.

In yet another Obamacare fanboy opinion written by Chief Justice John Roberts, the Court ruled, in a 6-3 decision, that the federal subsidies that have extended healthcare coverage to millions of Americans aren't going anywhere, even though some whiny wingnut loons tried real hard to take away their fellow Americans' coverage because Fox News and their favorite wingnut websites told them the Affordable Care Act is gonna death panel their grandma and their jobs and their freedom, and also Obama is "the anti-Christ."

INCORRECT AND SCREW YOU, says the Supreme Court. Let's explore!

Recall, because we already Wonksplained at you, that the central issue of King v. Burwell is whether Congress intended to provide tax subsidies to Americans who could not otherwise afford to purchase health insurance, even if they have the misfortune of living in states whose governors and legislatures hate Obama SOOOOOOO much, they refused to create health care exchanges for their citizens. Congressional Democrats (and even some Republicans) have said, "Yes, that's what we meant, we are just super bad at law writing, even though it's our job." In the majority opinion, Justice Roberts wrote that the law "contains more than a few examples of inartful drafting" -- oooh, SNAP! -- but, despite that:

The combination of no tax credits and an ineffective coverage requirement could well push a State’s individual insurance market into a death spiral. It is implausible that Congress meant the Act to operate in this manner. Congress made the guaranteed issue and community rating requirements applicable in every State in the Nation, but those requirements only work when combined with the coverage requirement and tax credits. It thus stands to reason that Congress meant for those provisions to apply in every State as well. [Emphasis added, you're welcome.]

The opinion takes a few other gratuitous shots at Congress, for how the bill was written and passed:

Congress wrote key parts of the Act behind closed doors, rather than through “the traditional legislative process.” [...] And Congress passed much of the Act using a complicated budgetary procedure known as “reconciliation,” which limited opportunities for debate and amendment, and bypassed the Senate’s normal 60-vote filibuster requirement. [...] As a result, the Act does not reflect the type of care and deliberation that one might expect of such significant legislation.

Yeah yeah, and the law is longer than all the Harry Potter books too, waaaaaaaah. We'd like to think, now that the Supreme Court has gone over the law with a fine-toothed comb -- twice! -- we can stop fretting about whether the law has been sufficiently vetted. Fingers crossed!

The opinion goes on ... and on ... and on ... about how much Congress sucks for not writing the Affordable Care Act more clearly so that any idiot, including Republicans, could understand that the bill was intended to help everybody, not just the ones lucky enough to live in states governed by politicians who will gladly trade a little bit of "liberty" to save the lives of their citizens. But despite the poor wording about how subsidies are supposed to be available to people whose states didn't create exchanges, here is what matters:

Those credits are necessary for the Federal Exchanges to function like their State Exchange counterparts, and to avoid the type of calamitous result that Congress plainly meant to avoid. [...]

Congress passed the Affordable Care Act to improve health insurance markets, not to destroy them. If at all possible, we must interpret the Act in a way that is consistent with the former, and avoids the latter. Section 36B can fairly be read consistent with what we see as Congress’s plan, and that is the reading we adopt.

And there you have it, Obamacare is saved again, the lower court's decision is affirmed, and we're pretty sure Roberts wrote at the end (in invisible ink), "P.S. Stop bugging me about this shit, we're done here, LIKE I ALREADY TOLD YOU THE LAST TIME."

Naturally, Justice Antonin Scalia thinks his colleagues are a bunch of stupids, as he wrote in his dissent, joined by Justices Thomas and Alito:

You would think the answer would be obvious -- so obvious there would hardly be a need for the Supreme Court to hear a case about it.

Yeah, it IS obvious, which is why the Court upheld Obamacare, duh. Scalia also complained that unless the Court agrees with him and other conservatives, "words no longer have meaning." Oh well. Maybe that means he will stop saying them now? Alas, no, he has more words:

But normal rules of interpretation seem always to yield to the overriding principle of the present Court: The Affordable Care Act must be saved.

Guess he's not going to the chief's house for sleepovers anymore, since Roberts has turned into a dirty liberal judicial activist who thinks preserving healthcare reform is, like, constitutional or something. But no, reading the Affordable Care Act to provide healthcare to all the people is, to Scalia, "interpretive jiggery-pokery" and "pure applesauce." Damnit, now we're hungry.

But here is the worst part, sayeth Scalia:

Worst of all for the repute of today’s decision, the Court’s reasoning is largely self-defeating. The Court predicts that making tax credits unavailable in States that do not set up their own Exchanges would cause disastrous economic consequences there. If that is so, however, wouldn’t one expect States to react by setting up their own Exchanges?

Well, sure, Scalia, one would expect states to create exchanges, to the benefit of their people and also their bottom line. But as so many Republican governors have made clear, they'd rather screw their citizens, and their budgets, to make some kind of childish temper tantrum point about how they really, REALLY hate the president and his healthcare reform VERY MUCH. See, for example, Florida Gov. Rick Scott.

Scalia also suggests that Congress could just scrap ACA entirely and start over, as if Republicans haven't tried, almost 60 times, to do that:

Congress could also do something else altogether, entirely abandoning the structure of the Affordable Care Act.

Or, alternatively, everyone could stop trying to make Repeal happen, accept that this is the law of the land and it is good for all those Americans who get to have healthcare now, which they didn't get to have before, and which they wouldn't have under the Republican replacement plan, which is currently "Uh, we'll get back to you."

So, enjoy your subsidized healthcare, America. And as for you, Republicans, you can breathe that sigh of relief now that millions of Americans won't blame you for taking away their healthcare. Hope you have finally learned your lesson.