Supreme Court Will Deport Everybody Before Donald Trump Has A Chance, Sad! 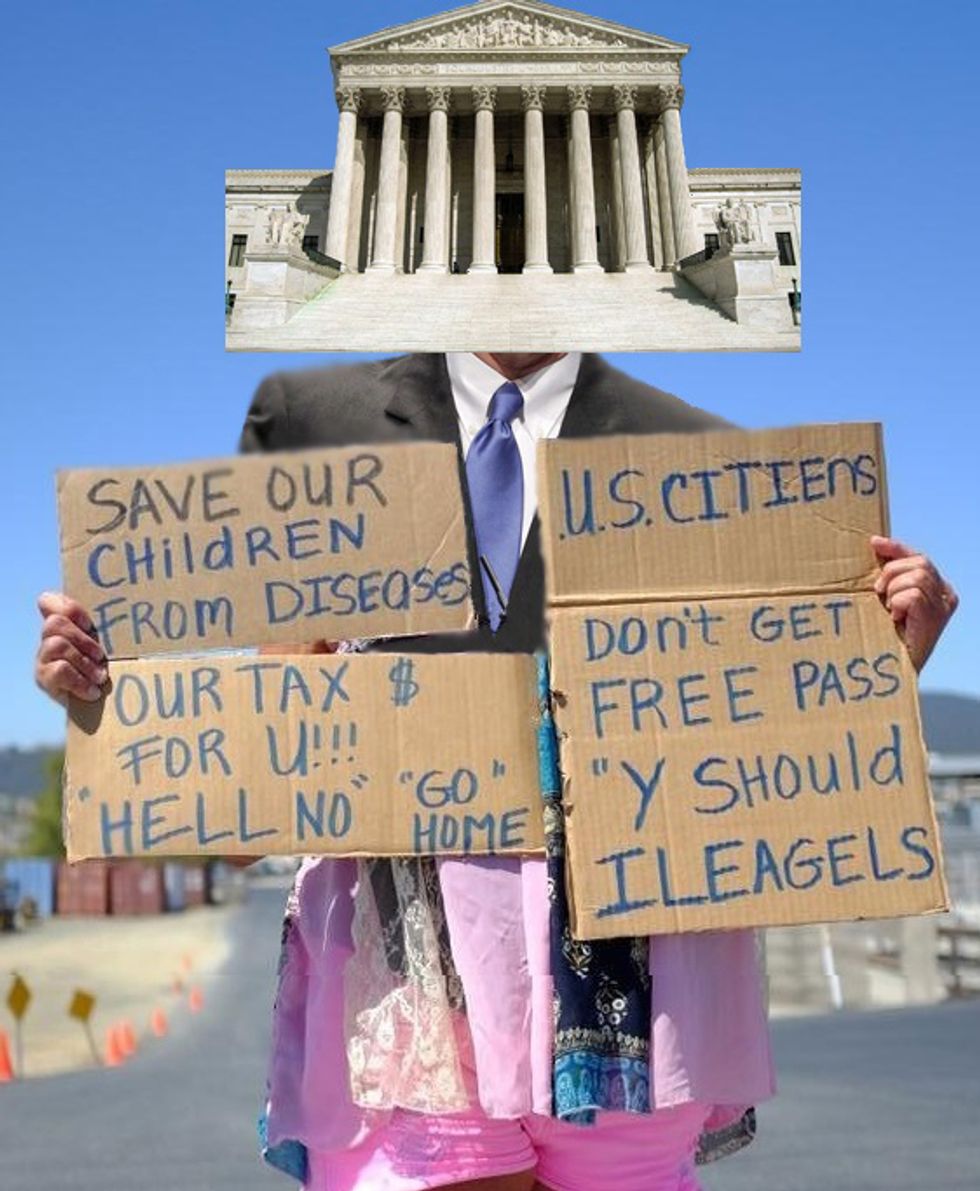 That guy is such a jerk

We got another good example Thursday of why it's a good idea to have an odd number of justices on the Supreme Court, as the Senate's refusal to do its damn job had more fallout: The eight-member Court deadlocked on a case involving President Obama's executive action on immigration, meaning that about five million people won't be protected from deportation or able to apply for work permits. So hooray, it's back to the shadows for millions of people!

The case, United States v. Texas, No. 15-674, concerned an executive action by the president to allow as many as five million unauthorized immigrants who are the parents of citizens or of lawful permanent residents to apply for a program that would spare them from deportation and provide them with work permits. The program was called Deferred Action for Parents of Americans and Lawful Permanent Residents, or DAPA.

This case doesn't affect Obama's earlier executive action deferring deportation for young folks who were brought into the country as children, but you can bet there'll be lawsuits challenging that, too. And while it won't really be deporting anyone (Wonket fibs in headlines? The deuce you say!), it also won't keep any immigrants out, either. What it does do is kill off Obama's plan to let people fill out a "Please do not deport me" form and then get a work permit.

And since this was a deadlock, not an actual decision, there was no precedent set, no opinions to read, and not even any announcement of which four justices were for and which were against. Just a one-sentence announcement: “The judgment is affirmed by an equally divided Court," and boom, the decision of a federal appeals court in February was upheld.

Not surprisingly, Barack Obama was not a happy President:

[For] more than two decades now, our immigration system, everybody acknowledges, has been broken. And the fact that the Supreme Court wasn’t able to issue a decision today doesn’t just set the system back even further, it takes us further from the country that we aspire to be.

Obama reviewed the tortured history of recent immigration legislation, pointing out that after the Senate managed to actually pass a bipartisan bill for immigration reform, the House delayed it to death, so he took action himself to at least make sure only criminal aliens were deported, and protecting undocumented young people who could have been allowed to stay in the country if the DREAM act had passed:

But as we say, that's only for the moment. The president then did a careful forensic examination of why the Supreme Court was deadlocked in the first place and found that some senators just don't want to do their job until that nice President Trump takes the oath of office:

Today, the Supreme Court was unable to reach a decision. This is part of the consequence of the Republican failure so far to give a fair hearing to Mr. Merrick Garland, my nominee to the Supreme Court. It means that the expanded set of common-sense deferred action policies -- the ones that I announced two years ago -- can’t go forward at this stage, until there is a ninth justice on the Court to break the tie.

Obama also added that the administration's deportation priorities aren't affected by the ruling: while there won't be any Don't Deport Me paperwork or work permits, the administration will still only deport people who've broken laws. And he predicted that someday, comprehensive immigration reform would pass, possibly "after all the old Gringos die off." (We may have mis-transcribed that. Stop sending angry emails, he didn't say that.)

The president closed by reminding us there's an election coming up, and that presidents appoint Supreme Court justices, and Senators confirm them, A-HEM! He didn't seem to think a wall would help any.

And finally, a bit of trivia that will probably not make the least bit of difference, but is interesting:

Because the lower-court injunction was preliminary, the Obama administration still has the option of appealing the lower court for a full ruling on the stalled executive action. The administration could then appeal that decision back to the Supreme Court, hoping that by the time it arrived, Congress would have approved a ninth member. But Obama did not mention appealing the decision and suggested on Thursday that his expansion attempt was over.

So no, let's not go getting our hopes up. Or our walls, either.