Sure, Rand Paul Is Now A Tree Hugger, Why Not? 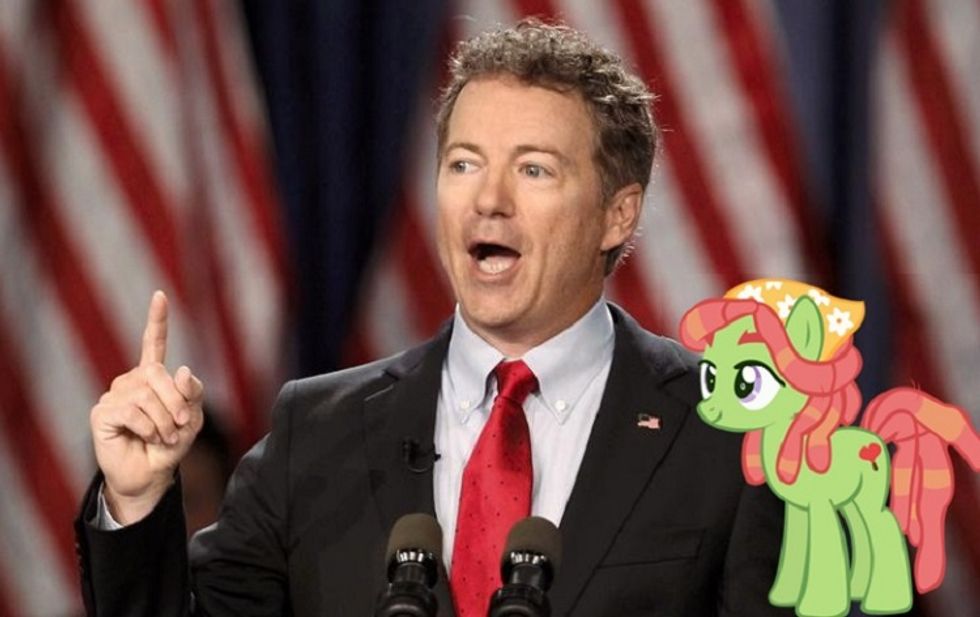 In yet another attempt to convince people who aren't paying attention that he's a totally different kind of Republican, Rand Paul has come out as a self-proclaimed "tree hugger" who thinks composting is groovy and that clean air and water are good things. These and other exciting revelations are in Paul's exciting new book-shaped object that you couldn't pay us enough to read, Taking a Stand: Moving Beyond Partisan Politics to Unite America, in bookstores today and coming soon to a remainders shelf near you.

In a new book released on Tuesday, Paul said he composts and believes in clean air and clean water. Paul notes that he has planted giant sequoias in his yard and repurposed old trees used for a fort to build compost bins.

"None of this is at odds with wanting out government to be smaller, with wanting our regulatory bodies to protect both our land and water," Paul wrote...

Allegedly he wrote that with a straight face, even. Those would be the same regulatory bodies that Rand Paul has dedicated his career to reining in, and which he complained in 2013 had forced him to buy a low-flow toilet that's simply incapable of handling the massive amounts of poop generated by Rand Paul.

And don't even get him started on those tyrannical curly lightbulbs, which are TYRANNY! But maybe Rand Paul has turned over a new leaf, or at least turned over a new layer of his compost pile. In fact, he's simply flabbergasted that anyone could think Republicans aren't huge Greenies:

"It boggles my mind to think that somehow Republicans have been branded as a party that doesn't like the environment," he said, pointing to avowed conservationist Republicans like Teddy Roosevelt and Abraham Lincoln.

Paul also details his history planting trees and flowers at his house in Bowling Green, Kentucky and his childhood home in Lake Jackson, Texas. Some trees he has planted in Bowling Green are now 40-feet tall, according to the candidate.

"I'm a crunchy conservative and a tree hugger and proud of it," Paul writes.

Yes indeedy, it is quite the mystery that Republicans have a reputation for being indifferent to the environment, what with the party's commitment to making climate science disappear and maybe eliminating the EPA and the Endangered Species Act while they're at it.

Republicans love the environment, as we know from the tree-hugging sentiments of Ronald Reagan, who once said there needed to be a "common-sense limit" to preserving wildlands:

I mean, if you've looked at a hundred thousand acres or so of trees — you know, a tree is a tree, how many more do you need to look at?

Sadly, he never actually said, "If you've seen one redwood tree, you've seen them all," which is a much snappier summation of the same thing.

But apparently Rand Paul is very committed to the environment, as long as it is the environment on his own private property and nobody's telling how much water his toilet can use to flush away his massive Objectivist dumps.

Also, too, he thinks regulatory agencies are maybe good things, just as long as they don't interfere with profits, like when he complained in 2010 that Barack Obama was far too mean to BP just because it filled the Gulf of Mexico with oil:

What I don’t like from the president’s administration is this sort of, “I’ll put my boot heel on the throat of BP.” I think that sounds really un-American in his criticism of business. And I think it’s part of this sort of blame-game society in the sense that it’s always got to be somebody’s fault instead of the fact that maybe sometimes accidents happen.

He also said the same thing about coal mines, and how now and then there's a major disaster and some miners die, but why do we have to get all het up about it?

We had a mining accident that was very tragic. … Then we come in and it’s always someone’s fault. Maybe sometimes accidents happen.

Friend to the Environment Rand Paul later made up for that comment by explaining that he's a huge fan of the profitable but environmentally devastating practice of mountaintop removal coal mining, which he said was a victim of unfair naming, because "we’re not talking about Mount Everest. We’re talking about these little knobby hills that are everywhere out here." And so who really cares if you dump half of a knobby little hill into a stream and make the water just a little bit undrinkable? As for the danger of working coal mines, Rand Paul explained during his 2010 Senate campaign that Washington just needs to butt out, since the people who own the mines can be trusted not to skimp on safety, because of the magic of the Free Market:

“The bottom line is: I’m not an expert, so don’t give me the power in Washington to be making rules,” Paul said at a recent campaign stop in response to questions about April’s deadly mining explosion in West Virginia. “You live here, and you have to work in the mines. You’d try to make good rules to protect your people here. If you don’t, I’m thinking that no one will apply for those jobs.”

That would have been the Upper Big Branch Mine disaster, for which Massey Energy CEO Don Blankenship was indicted for criminal conspiracy last year; his case is finally moving toward trial. There's a guy who knows how to make rules.

So you go, Rand Paul: dig your compost and plant your trees, and we'll look forward to the reception you get when you explain to the Sierra Club that Republicans and the Free Market are the best possible stewards of the environment. And see if you could add a little fiber to your diet. Ever eat a pine tree? Many parts are edible.