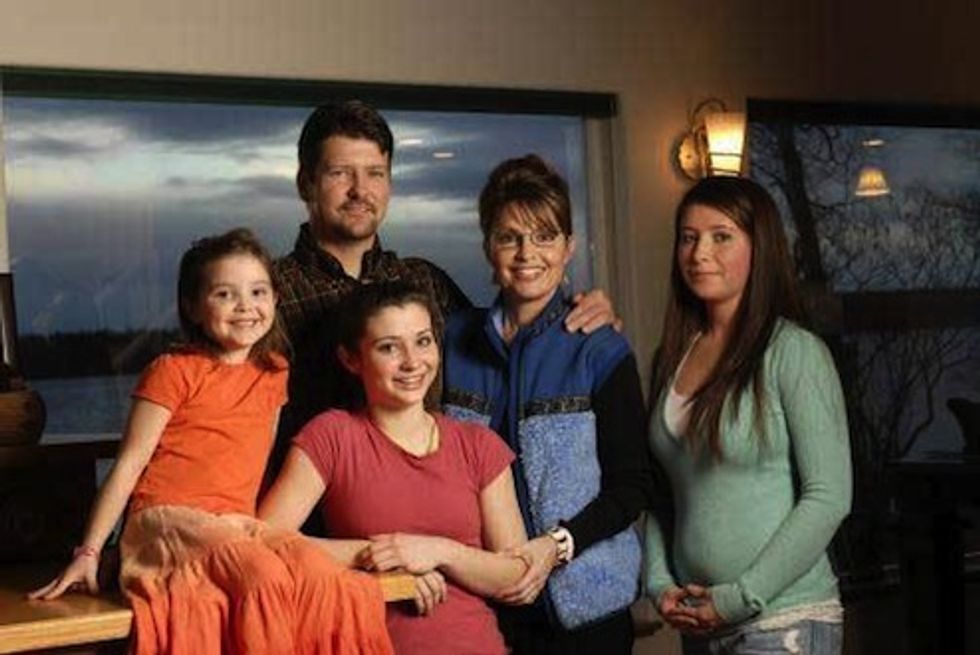 Hello librul commie free-speech-hatin' intolerants, who do not understand how the First Amendment protects your right to arglebargle on the teevee as long as it is the right kind of arglebargle. (Hint: Gay-hating is the right kind. Wishing someone would dookie in Sarah Palin's mouth is the wrong kind. Get it? No, neither do we. Shut up, this is free speech!)

Last week, the queen of word salad and also of quitting her job and also of just being generally hi-larious in a most unintentional way, which is why we don't even wish we could quit her because we love her so hard, explained to you idiots how free speech works.

Free speech is an endangered species. Those “intolerants” hatin’ and taking on the Duck Dynasty patriarch for voicing his personal opinion are taking on all of us.

And what was his "personal opinion" Sarah so staunchly defended? Hell if Sarah knows!

According to Palin's reasoning, she didn't have to read the interview to defend Robertson in the first place because the substance of his comments didn't matter. He was invoking the Bible, she said, so his critics are actually taking issue with Scripture itself.

We do not remember the part of the Bible that talks about how happy and not-singing-the-blues blacks in the South were until welfare came along and ruined everything and made them sing the blues. We are guessing Palin doesn't either. But then, we are assuming she's read as much of the Bible as she has read of Robertson's words, and that hasn't stopped her from saying Things! and Words! about it.

We are a little surprised that no one put Robertson's 140 most offensive words (much shorter and easier to read than the Bible) in front of Palin, or she would have read oh all of 'em, Katie. But apparently no one did that, so Palin just reckoned he was Bible-quotin', and therefore, liberals are intolerants and haters and free speech and First Amendment and also too also too also too!

How does she know he was quotin' from the Bible if she did not actually read his words? Maybe Palin got the gist of Robertson's not-actually-from-the-Bible screed from her daughter, the lovely poster child for the success of abstinence-only education, Bristol Palin, who also wrote words (what were probably ghostwritten for her because she is a Palin, after all), defending Robertson because we guess reality teevee star trash have to stick together:

Everyone needs to leave Phil Robertson alone for expressing his beliefs. I think it’s so hypocritical how the LGBT community expects every single flippen person to agree with their life style. This flies in the face of what makes America great – people can have their own beliefs and own opinions and their own ways of life. Everyone needs to treat others like God would, with love.

It goes both ways.

I hate how the LGBT community says it’s all about “love” and “equality.” However, if you don’t agree with their lifestyle, they spread the most hate. It is so hypocritical it makes my stomach turn. They need to learn how to respect others’ opinions and not just jump to the conclusion that everyone who doesn’t support homosexuality and gay marriage is homophobic.

They take the easy way out every time anyone speaks out about their beliefs on the Bible. If I were Duck Dynasty, I would take my show to another channel. So much disrespect.

See? Everyone needs to be more loving, like God, which is why Bristol hates them gays with their gay gayness, always being all gay and then not liking when some innocent Bible-humpers tell them they're going to burn in hell for being gay, which is just so gay!

Obviously, we all take Bristol's interpretation of the Bible Very Seriously because she is a girl what knows Bible stuff. She already proved that when she unmarried-teen-momsplained to President Obama how the sanctity of traditional marriage is, like, so old, and how he was personally destroying it by not teaching his daughters to hate them gays, like how Bristol was raised. It is in the Bible kind of 'n stuff!

We are not actually surprised that mini-grifter Bristol is trying to insert herself into the latest rightwing poutrage by saying things that are dumb, nor are we surprised that her grizzly mama could not be bothered to read the words she so fatuously defended. Nope, we are basically just laughing at this derptastic duo doing that thing they do, which is saying dumb things that make us laugh.