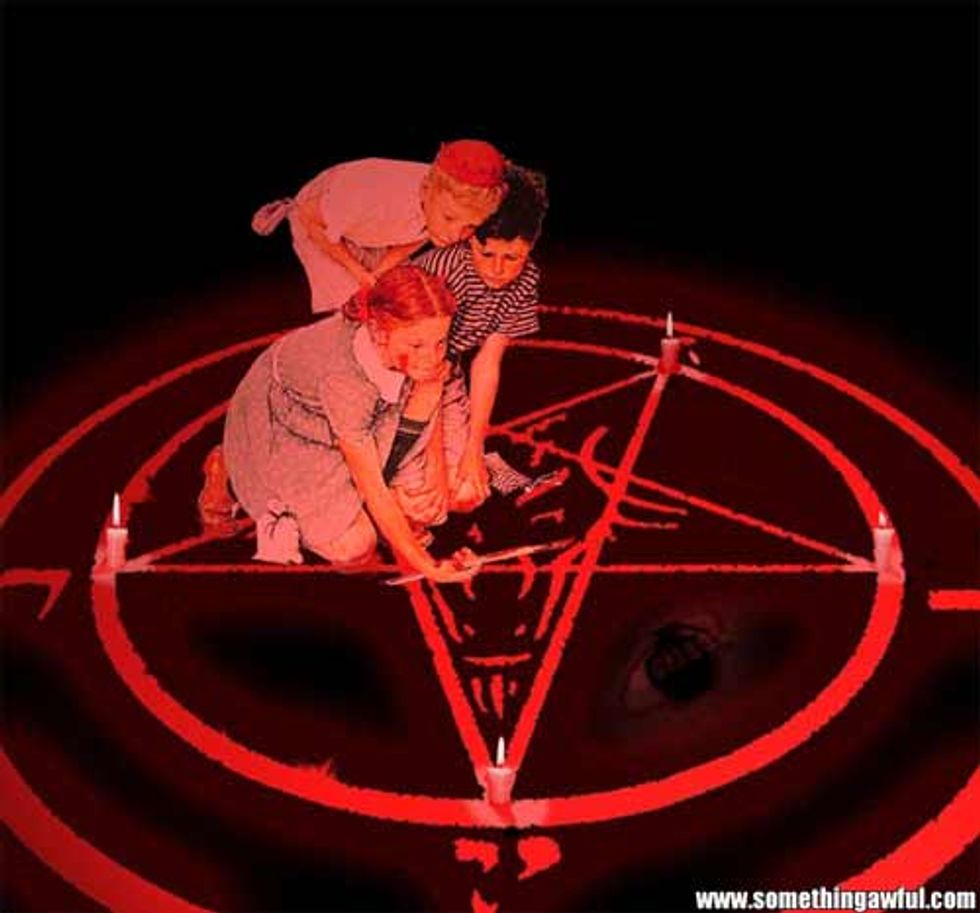 We are once again pleasantly gobsmacked by the simple brilliance of our favorite First Amendment trolls, the dead-serious activist/satirists at the Satanic Temple. If Christianists are going to insist that sincerely held religious beliefs give them an opt-out for any law, then by the Hoary Beard of Baphomet, the same should hold for Satanists, which is why the Missouri branch of the Satanic Temple is preparing to sue for the right of a Satanist lady to skip Missouri's dumb 72-hour waiting period for an abortion.

You see, according to Damien Ba’al, head of the Satanic Temple’s St. Louis chapter, the 72-hour wait would severely restrict the rights of a Missouri woman, whom they're identifying only as "Mary" -- might as well push as many Christian buttons as possible -- to practice her Satanic faith, a central tenet of which is that "one’s body is inviolable, subject to one’s own will alone." "Mary" knows full well that she wants to get a legal medical procedure, and that there is no medical reason to have to schedule two appointments, three days apart, in order to avail herself of that medical treatment. As Satanic Temple founder Lucien Greaves (civilian name: Doug Mesner) told Hemant Mehta at the Friendly Atheist blog:

As Satanists we believe in individual autonomy, personal choice, and the inviolability of one’s own body. Further, we believe one should be free to make one’s own decisions, uncoerced, based on the best available scientific evidence, whether or not the science comports with the religious and/or political views of others.

To that end, the Satanic Temple set up a GoFundMe campaign last week to raise the $800 that Mary would need for lodging and transportation to St. Louis, where the state's last remaining abortion provider, Planned Parenthood, is located. The GoFundMe page is now removed, but reportedly met its goal in a single day; the Temple has also helped Mary with a document informing her doctor that the waiting period would violate her religious beliefs, laying out the case for immediate treatment in terms that plainly appeal to Missouri's "Religious Freedom Restoration Act":

As you know, state law requires a waiting period after I first receive counseling before I can undergo an abortion. I regard a waiting period as a state sanctioned attempt to discourage abortion by instilling an unnecessary burden as part of the process to obtain this legal medical procedure. The waiting period interferes with the inviolability of my body and thereby imposes an unwanted and substantial burden on my sincerely held religious beliefs.

This letter constitutes my acknowledgment that you have notified me of the state mandated waiting period, but demands that you do not abide by this obligation because the waiting period offends my sincerely held religious beliefs, which take precedent.

Mary's case is the Satanic Temple's latest move in response to the Hobby Lobby decision; last summer, the group announced that it would pursue exemptions from restrictive state "consent" laws requiring women seeking abortions to be subjected to waiting periods, transvaginal ultrasounds, and signing forms admitting that they were dirty babby-murdering sluts.

We like this approach a hell of a lot. If wingnuts are going to insist that science and secular values are a "religion," then by Crom, let's go ahead and demand that our "beliefs" get the same weight that the god-botherers' do. Waiting periods serve no good medical purpose, and are designed to make getting an abortion more burdensome for women, so why not subvert them by declaring one's bodily autonomy to be a matter of inviolable religious principle? Hell, if Hobby Lobby's sincerely held beliefs about contraceptives don't even have to be medically accurate, then a set of sincerely held beliefs that also have the benefit of actually being grounded in reality ought to make for an airtight case. Hahaha, we are so silly, thinking that "reality" could trump the simple truth that abortion makes Jebus cry.

And what if Planned Parenthood won't comply with Mary's sincerely held belief that she doesn't need to wait three magical days for a procedure that is safe and legal? The Satanic Temple's Lucien Greaves promises that "We will seek to pursue legal action if that waiver is not respected."

If you're in the mood to contribute to the Satanic Temple's "Religious Reproductive Rights Legal Aid Fund," get on over to their website and throw some money at your computer monitor. It's looking like there are going to be other women in need of their help: Oklahoma's House just passed a bill to impose a three-day waiting period for abortions, making it the fourth state with that restriction.

We're looking forward to seeing how the Satanic Temple manages to parlay its sincerely held beliefs in climate science into some meaningful restrictions on CO2 emissions. You know, for Religious Freedom.

If only Jesus had said something about the sanctity of the polar ice caps.