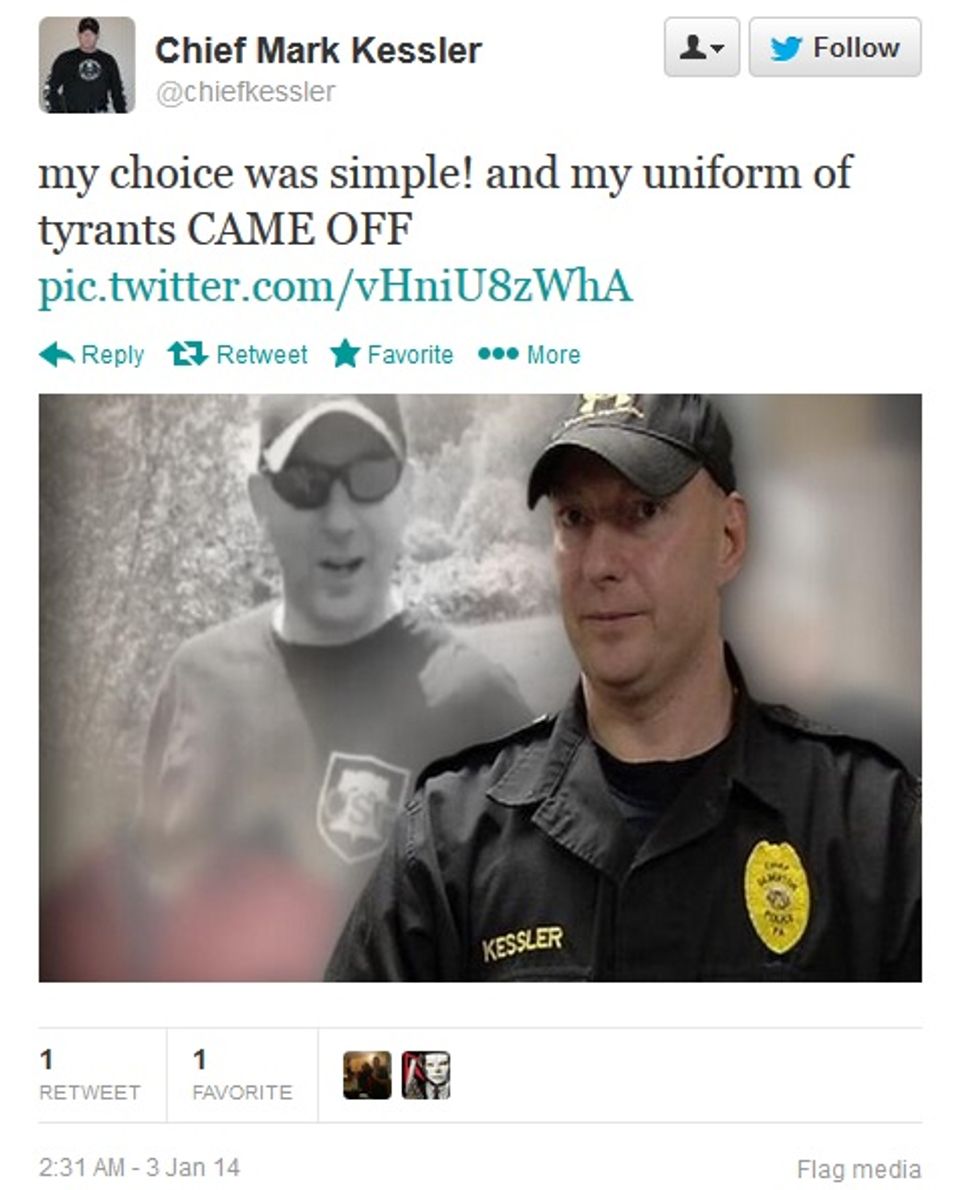 It's been a while since we've heard anything from Uberpatriot Mark Kessler, theindefinitely-suspended police chief of Gilberton, Pennsylvania. As you recall, he created a bit of a stir last summer when he posted several videos of himself bravely shooting photographs of Nancy Pelosi and calling for "cleansing" U.S. America of liberals and liberal news agencies and so on. Last time we checked in with him was in October, when his termination hearing was interrupted by a supporter's loaded handgun falling out of its holster and onto the floor of the meeting room. The hearing was suspended until a more suitable location with decent security could be found.

Well! Turns out the Borough of Gilberton wants to resume that hearing in the Lackawanna County Courthouse in Scranton, a whole hour's drive away. Kessler filed a lawsuit to prevent the hearing from being held outside of Schuylkill County, because obviously a hearing in the next county over would violate his rights. This man knows his rights, and they include owning guns, carrying guns, fondling guns, talking about guns, sleeping with guns, shooting pictures of people who might take away his guns, gazing lovingly at guns, talking about shooting people who might take away his guns, and not having troops quartered in his home in time of peace.

For some reason, the borough was unable to get permission to schedule the hearing in the Shuylkill County Courthouse, so they tried the courthouse in Scranton and scheduled the hearing. Kessler sued Monday to stop the hearing from moving to Scranton, claiming that the location was selected "to intentionally prejudice [Kessler] and to create obstructions with the intent to deprive [Kessler] his rights to a fair and impartial hearing," according to his petition, which goes on to claim that his witnesses would be unable to take the time and are unwilling to "be subject to the expense and danger of traveling in the winter months."

Frankly, it's a slightly more practical objection than we'd anticipated; considering other aspects of his politics, we thought sure there was going to be some weird argument about his sovereignty being violated by going outside his home county.

In addition to trying to keep his termination hearing from ever resuming, Kessler has also been tweeting up a storm, calling on his "fellow brother [sic] & sisters in uniform" to "make a serious choice, stand with god & country or be part of a TYRANNICAL regime!" and inviting people to join his super-patriotic loons-with-guns club, which will be "the biggest, baddest, militia in the nation!" Presumably the January 3 tweet up top indicates that he has removed his "uniform of tyrants," which means god only knows what -- obviously, he's still trying not to get fired, so we assume he's only removing a metaphorical uniform, which doesn't involve any loss of insurance benefits.