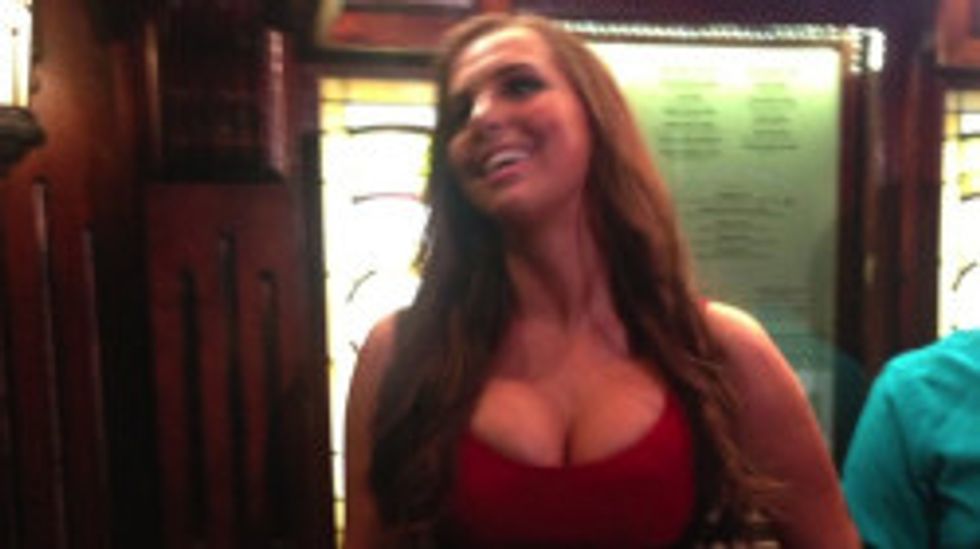 presence delayed Weiner’s concession speech for more than a half hour, as he was forced to scurry in unceremoniously through a neighboring fast food restaurant in order to avoid a confrontation

we were reminded of Oscar Wilde's observation on fox-hunting, from his also foreshadowingly named play "A Woman of No Importance." Wilde described "the English country gentleman galloping after a fox" as "the unspeakable in full pursuit of the uneatable.” Although perhaps in this case it was the uneatable chasing the unspeakable. Either way.

When Leathers was asked why she was outside Weiner’s primary party she replied, “I just felt like I should. I felt obligated after being this involved in the situation,” she answered.

And plus, she's got these new boobs to show off, arewerite?

And anyway, before Sydney and her new boobs, new nose and newly lipo-ed midriff arrived, the Weiner event had been a rather flaccid affair, a deflated evening of frustrated disappointment,  as Weiner let down his rigid show of electoral bravado, and his campaign limped to its impotent end. Completely unable to pump up any support, it was a foregone conclusion that Weiner would be unable to overcome the voters' resistance and win entry to the mayoral Gracie mansion. But this Sydney Leathers chick does know how to make an entrance, boobs first of course, and at least gave us a reason to talk about it. BOOBS.

Also we would like to thank the god of all things big and new, that the Mrs. Carlos Danger, Huma Abedin, was conspicuously not standing, or running away from Sydney, with her man, because Huma seems to have only been waiting for the election to be over to get rid of this guy already we hope, and thankfully for her and for all of us, she was prominently absent from Weiner's side.

Yes, in the end, Weiner was alone, the dick fleeing boobs, retreating to his limo, flipping off reporters on his way to obscurity, or a CNN analyst job, as his slow motion implosion reached its anticlimax. And we mean thankfully on the reals y'all, because had Huma been there when Sydney Leathers made her bouncing but not behaving, oh so importantly confident appearance, we might all have wound up with a permanent cringe of just oh fuck horror on our faces for the rest of our lives, and Anthony Weiner's dick pics and sexty sext sextings have given us all enough of that forever.