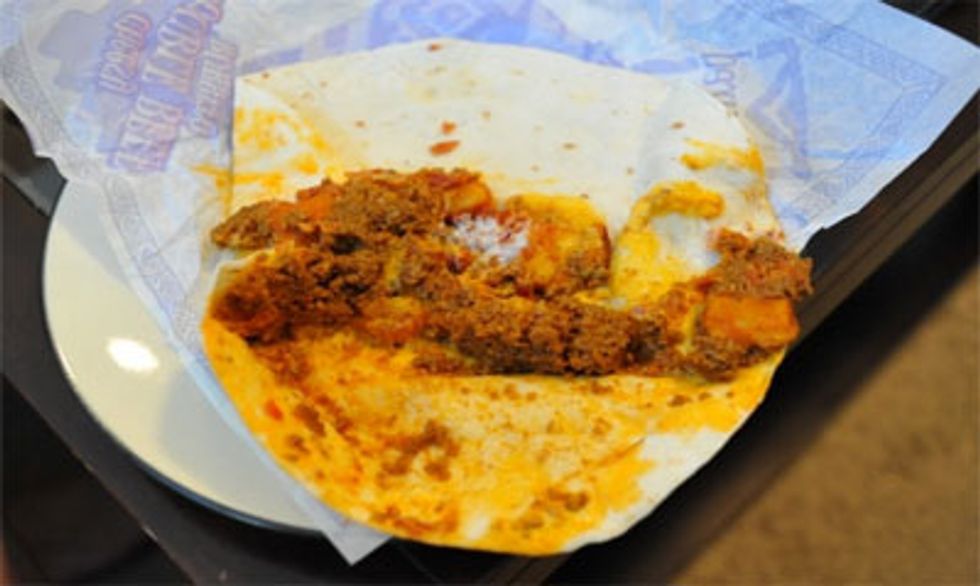 At first this story will seem like a Nice Time, but it is not, so stop smiling and definitely stop making plans to have a serious craving for Taco Bell when you are stoned or drunk later. Taco Bell delivered 6,000 free tacos to congressional staffers Tuesday afternoon, to thank them for being such good congressional staffers, YAY! No wait, that is not it. They delivered all the free tacos to the congressional staffers to remind them to please remember that Taco Bell has some, ahem, legislative items that they've been lobbying for, specifically for the purposes of preventing their employees from unionizing, and also denying them employer funded healthcare, BOO!

So what happens is, before the fun part of the day, when all the congressional staffers run toward the mountain of free tacos like toddlers jumping into the balls at Chuck E. Cheese, franchise owners meet with congresscritters and their staff, to drop little suggestions in their ears about whatever's on their minds. Two franchise owners told California Republican Rep. Jeff Denham they were REALLY worried that they would have to give too many people healthcare under the ACA, due to confusion over the definition of "full-time employee." And House Republicans have been trying SO HARD to help them, passing in January a bill clarifying that "full-time" under Obamacare means at least 40 hours. But of course, the Senate hasn't done anything with the bill, and tyrant Obama will probably veto it if they do. Guess they're gonna have bring more tacos next time.

Some franchise owners are also very worried that their healthcare-free workers could get uppity and decide to unionize, which is NOT ALLOWED, because then they might demand healthcare! And higher wages! Taco Bell franchise owners say no way, Jose. At issue is a ruling from the National Labor Relations Board that stated that McDonald's was a “'joint employer' of both franchisees and workers," which could make corporations like Taco Bell, which operates in a similar fashion, responsible for the shitty workers' rights-violating behavior of their franchisees. And then the unions could come in, make all hell break loose, and create a slippery slope that would kill Taco Bell jobs forever. And then what would potheads do for food?

And what would congressional staffers do for Taco Day, which everybody in Washington is always SO excited about, when the Taco Bell franchisees stop by to personally give them the shits:

“It’s been going on for quite a few years now, it is infamous. Everybody looks forward to it from year to year. It’s a free for all,” said Joye Smith, a franchisee from Northern California. “This is how we want to say thank you for all that you do for us,” she added, noting that some congressional staffers bring boxes down to haul more tacos back to the office.

Awwww, exciting! For such shitty reasons! (Lit'rally!) But anyway, now Taco Day is over, and all the healthcare-ruining, labor-fucking Republican congress demons and their staffs will have to get by the way they do all the other days they're in session, which is eating gay-hating Chick-Fil-A sammiches until they freedom-vomit all over the House floor.