Target Doesn't Need None Of You Dumb Bigots' Business, So BYE FELICIA 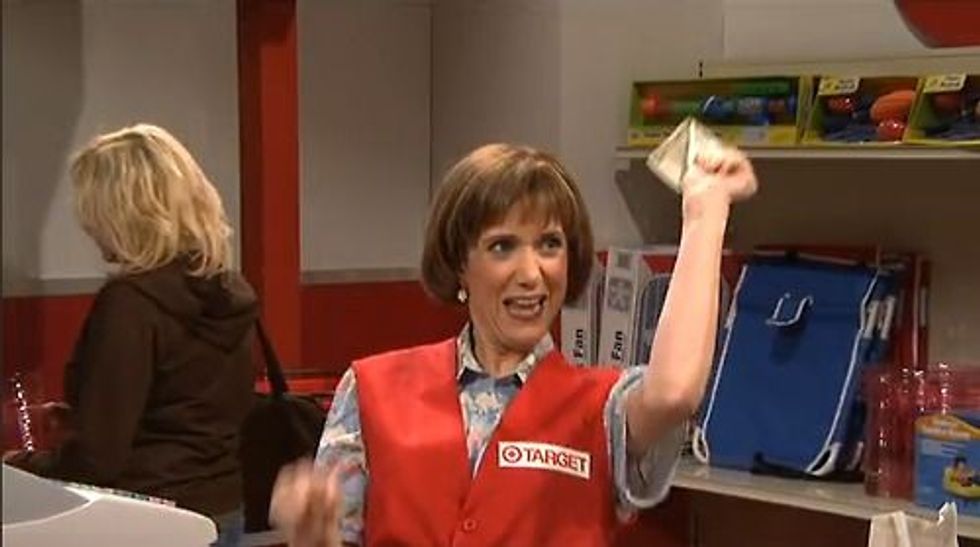 If you have been following the transgender potty wars, you know the bigots at the American Family Association are SO UPSET that Target is allowing people to pee in the bathroom that matches their own gender identity (which doesn't change by the day, #TransFact), that they've launched a boycott with allllllllll these wingnuts swearin' up and down they ain't gonna go back to no Target store, no not never, God willin' and the creek don't rise, boy howdy, praise Jesus, NASCAR 4EVER! (That is their EXACT slogan.)

[wonkbar]<a href="http://wonkette.com/601869/crazy-christian-lady-sick-and-tired-of-satan-raping-her-babies-at-target"></a>[/wonkbar]Oh, a few of them are going back to Target, but only to SCREAM AT PEOPLE ABOUT HOW JESUS IS GOING TO SEND THEM TO HELL FOR BATHROOM VIOLATIONS! Or whatever it is they're yammering on about.

Target's got some news for y'all motherfuckers:

[Target CEO Brian Cornell] did allow that just a few stores had some some protests and took a bit of a hit sales wise, but on the whole, the 1,800-store retailer didn’t feel anything.

“To date we have not seen a material or measurable impact on our business. Just a handful of stores across the country have seen some activity and have been impacted ,” he added.

He admitted that business was a bit down, but assured everyone it wasn't because some cranky-ass fuckbiscuits who were Walmart shoppers in the first place have a bur up their smelly carcass holes.

Have we talked about this before? We feel like we have. Well, at the risk of sounding like a broken Spotify machine, we must point out that one of the big reasons corporations like Target moved so much faster than the general population on LGBT issues is that they realized that, based on math (as opposed to the upsetted fee-fees of the religious right), it was better for their bottom line to be more inclusive of EVERYONE, instead of catering to what butthurt fundamentalist Christians wanted.

That's why there are so many companies with perfect scores on the Human Rights Campaign's Corporate Equality Index, which ranks corporations on how open and welcoming they are to LGBT employees and customers.

That's why they're currently going apeshit at North Carolina and Mississippi. Because it's GOOD FOR THEIR BUSINESS to do so.

You wingnuts, on the other hand, are not really good for anyone's business, because you are full of shit whiners who won't be happy unless America is an Iranian-style theocracy, except with all the brown Muslin stuff taken out and replaced with White Republican Jesus.

In other words, fuck off.