Tea Partiers Scoff At Government Handouts, Use Them to Buy Stuff 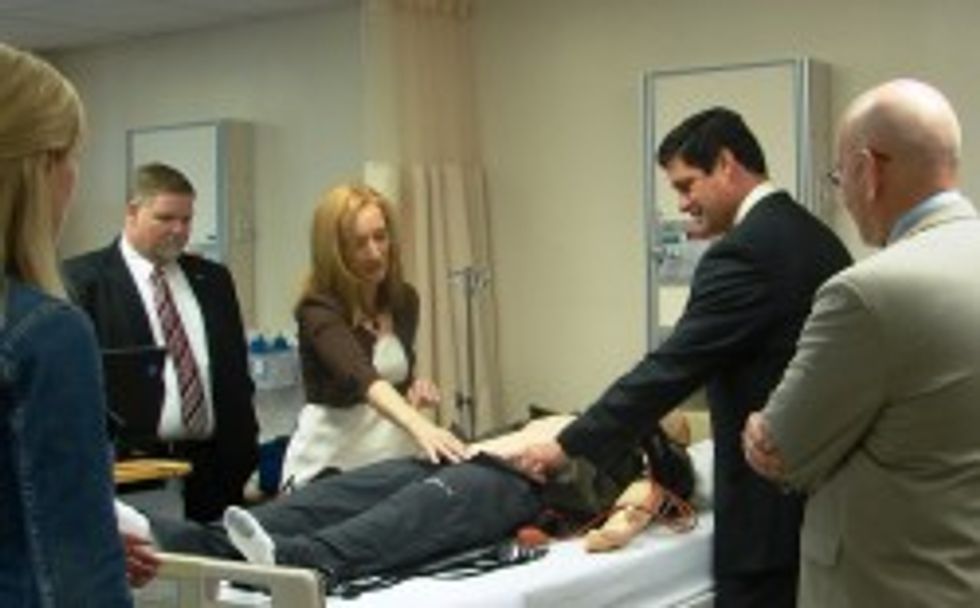 The New York Times created its own little Lifetime movie recently by visiting wonderful, cold, middle-class Chisago County, Minnesota, which gave 57 percent of itself over to Rick Santorum in last week's caucus. There, the reporters asked some Americans how they felt about the government, and of course many of them said they hated it, think it's an overly generous asshole, want it to die, and then bashfully/tearfully/reluctantly admitted that the very same government gives them thousands of dollars in benefits every year. The "hero" of this tale, a Mr. Ki Gulbranson, "says that too many Americans lean on taxpayers rather than living within their means. He supports politicians who promise to cut government spending." But that doesn't mean Gulbranson doesn't take in the earned income tax credit, free school meals for his children, and free expensive hospital operations for his old lady. Gulbranson also helped elect a Tea Party congressman frighteningly named Chip Cravaack (fondling the fake human in the picture), whose idea of explaining the national debt is putting 50-pound rocks in his children's backpacks and asking them to carry them forever.

Another ranter by the name of Brian Qualley, a tattoo artist, complains that his clients actually pay him for the tattoos he sears onto them because the money probably comes from their disability checks. “They're getting $300 or $400 tattoos, and they're wearing nice new Nike shoes that I can't afford," he says kindly.

Another guy at least has the common sense to say that without government help, his sister (but for some reason not he) would be a "street person."

But when the Times asked these people what the HELL everyone's problem is, vis à vis hating the very boob to which their lips remain affixed permanently, "many people interviewed here hemmed and hawed and said they could not decide. Some were reduced to tears."

Gulbranson, for one, gets the earned income tax credit and says he uses it to pay for his kids' sports equipment and their car insurance premiums. “If we didn’t get these government things, then probably my kids could not participate in some of the sports they do,” he said. AND YET...Gulbranson voted in 2010 for his NEIGHBOR, Rep. Cravaack, who believes that “Spending like this is simply unsustainable, and it’s time to cut up Washington, D.C.’s credit card." Cravaack defeated a longtime Democrat who, it goes without saying, supported the very things that keep Gulbranson from being underneath the safety net along with the ghostly souls that Romney doesn't give a flying butt about.

Says Cravaack, who is concerned about dumping the current debt onto his children like every other Santorum-licker, and actually imposed a significant tax increase on middle-class Americans, said two years ago at some event with the word "freedom" in it:

I vision that I open up [my children's] backpacks and I put in a 50-pound rock and zip it back up again. And I say, ‘Sorry, son, you’re going to have to hump this the rest of your life.’ Because that’s exactly what we’re doing to our national debt right now to our children.

Hey, at least this will make them Strong Men, but perhaps also "street people."

Here is the third google result for "air brushed novelties":

The reporters reminded Gulbranson about Medicare and Social Security. Doesn't he need those? Gulbranson's response was basically, "No. Yes. I don't know. Maybe. Ahhhh, fuck."