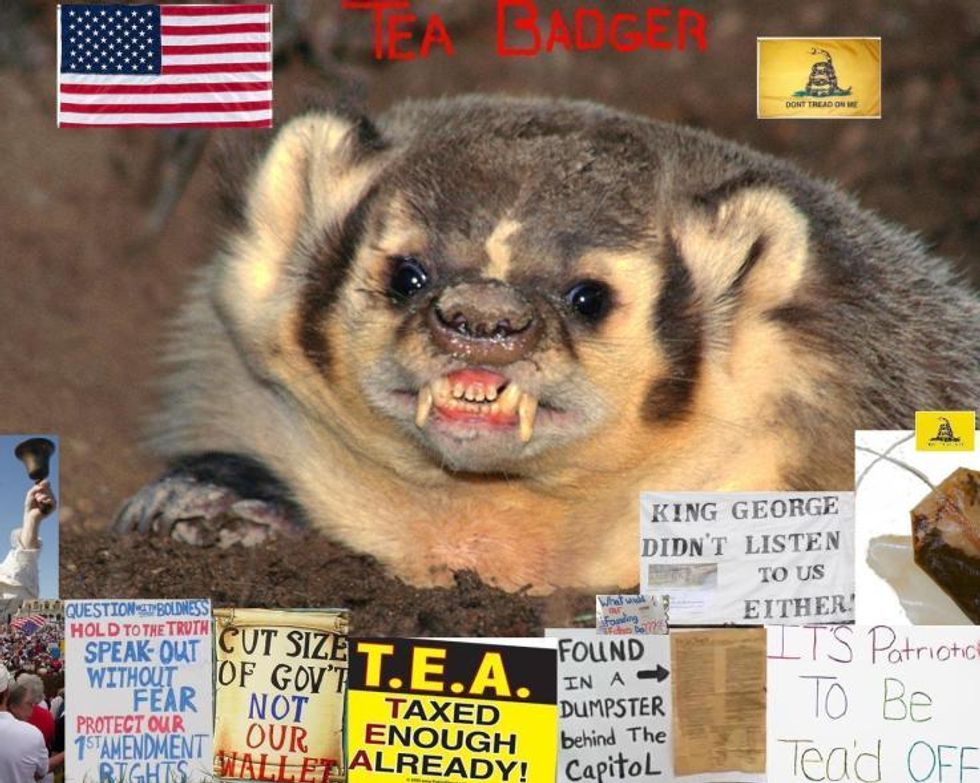 "Back in May, Diane Wickberg, a grandmother from Flagstaff, Ariz., slipped into the same outfit she wears every Tuesday — a white T-shirt bearing photos of the American flag and the U.S. Constitution, along with the words: 'Flagstaff Tea Party — Reclaiming Our Constitution.'" You mean she put on herpatriot uniform, lamestream media. Sure, this idyllic scene plays out every single day in foreclosed homes across the land as the Jesus-Sun rises over Ronald Reagan's America. But not on May 18 in Arizona. That was the day this Teabagger was asked to cover up her t-shirt at the polls. SOCIALISSSSSSSM!

Tuesday is the day her local tea party meetings are held.

But on that particular Tuesday, May 18, there was a special election taking place and Ms. Wickberg wore her T-shirt to the polls at Bethel Baptist Church. She was confronted by poll workers and told to change the shirt, turn it inside out or cover it up with a jacket. After some back and forth, she was allowed to vote in the T-shirt but only because no other voters were around.

So she has done as any government-hater would do: she's taken it to the activist judges in our judicial system in the form of a (TOTALLY NOT FRIVOLOUS DEMRAT AMBULANCE CHASER LAWYER) lawsuit.

Next they will be outlawing our scooters. How else is a person supposed to get from their Aerostar to the voting booth? There is literally no other way.

But this lady is really not a very good Teabagger. Real Teabaggers wear the same Teabagger t-shirt every day. [NYT]