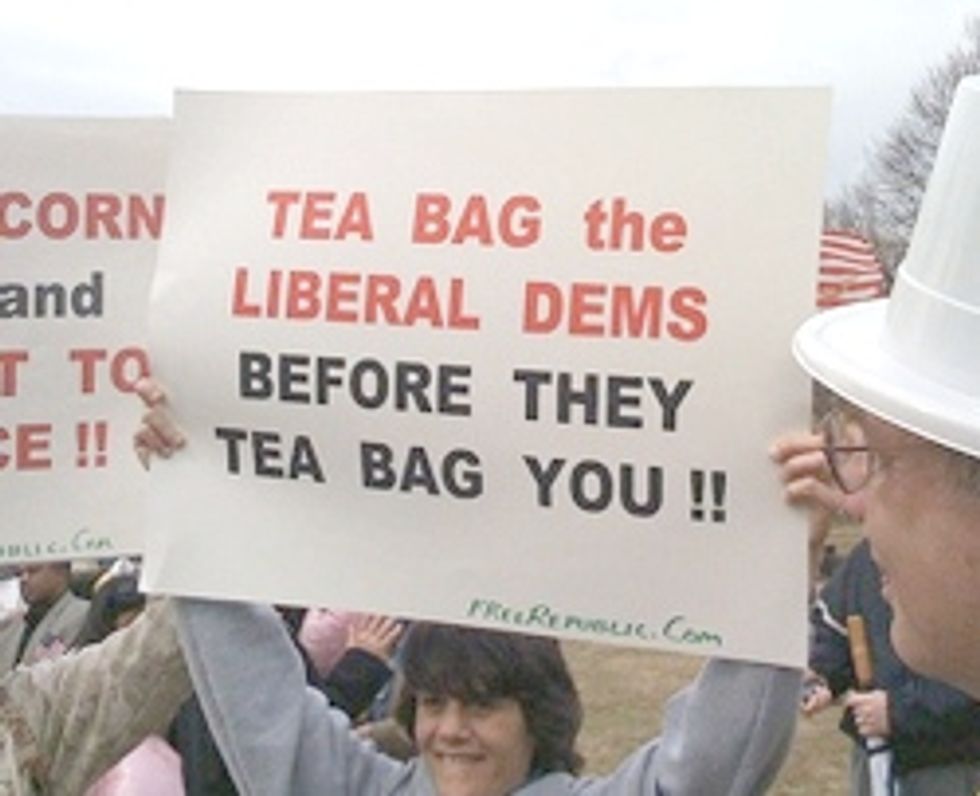 Teabagger groupshave not said anything yet about that ruling on the Defense of Marriage Act last week! Some feel hating the gays on this would distract from the Teabaggers' real issue, paranoid schizophrenia "fiscal matters." "Privately, though, many said they back the decision because it emphasizes the legal philosophy of states' rights." That Taxachusetts judge really did trick Teabaggers into supporting gay marriage! Hilarious.

"I do think it's a state's right," said Phillip Dennis, Texas state coordinator for the Tea Party Patriots. The group does not take a position on social issues, he said, but personally, "I believe that if the people in Massachusetts want gay people to get married, then they should allow it, just as people in Utah do not support abortion. They should have the right to vote against that."

Phillip Dennis was vomiting and blood was streaming out of his eyes when he said this, by the way.

The large tea party-affiliated organizations, including FreedomWorks and the Tea Party Nation, declined to comment on Tauro's ruling because of their groups' fiscal focus. "That's just not something that's on our radar," said Judson Phillips, founder of the Tea Party Nation. He acknowledged, however, that some in his group -- though not a majority -- are opposed to the Defense of Marriage Act.

The situation is perhaps different in South Florida, where Wilkinson said "several hundred" of the group's supporters are gay. "Our stance might be different than someone who's in Oklahoma," he said.

Sure, several hundred! Teabaggers are required to mark either "straight liberty-lover" or "no" on their registration forms, so that's how this man has counted the gays. [Tip to Washinton Post reporter: At this point, maybe you call the Teabaggers in Oklahoma and such? To see what they have to say?]