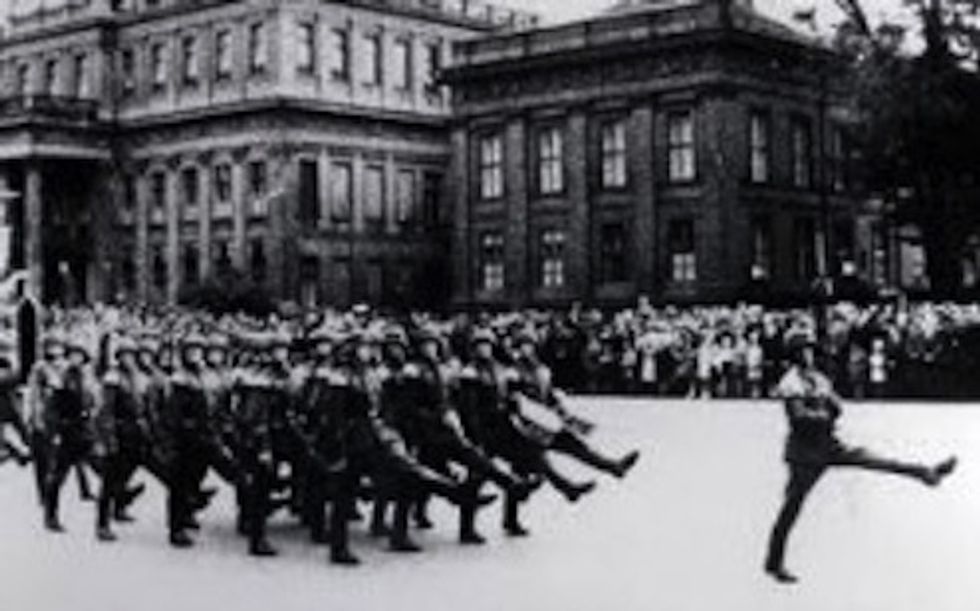 Meet Tom Perkins. He is an uber-gazillionaire tech dude who once killed a man with his yacht. But that's just an interesting footnote to his biography. See, Tom Perkins is apparently hiding in an attic in San Francisco just like Anne Frank, where he was somehow able to smuggle out this secret diary entry to the Wall Street Journal to warn of the coming Holocaust:

Writing from the epicenter of progressive thought, San Francisco, I would call attention to the parallels of fascist Nazi Germany to its war on its "one percent," namely its Jews, to the progressive war on the American one percent, namely the "rich."

In case you're thinking that sounds a tad hyperbolic, rest assured, Perkins has EVIDENCE that the progressive war on wealth inequality is pretty much exactly like Nazi Germany:

There is outraged public reaction to the Google buses carrying technology workers from the city to the peninsula high-tech companies which employ them. We have outrage over the rising real-estate prices which these "techno geeks" can pay. We have, for example, libelous and cruel attacks in the Chronicle on our number-one celebrity, the author Danielle Steel, alleging that she is a "snob" despite the millions she has spent on our city's homeless and mentally ill over the past decades.

Every child who learned about the Holocaust in school certainly remembers when Hitler wrote all those mean words about hack romance novelists. And while we often think the Nazis started by forcing women to take slut pills and rounding up all the guns, in FACT, it really started when some hippies in drum circles were all, like, "Damn, how come the people who broke our economy get to keep all their monies while we are starving and unemployed? That is unfair, and now we shall chant about it."

But it's not like Perkins says the Bay Area is being Holocausted by protesters as we speak. He's just asking questions:

This is a very dangerous drift in our American thinking. Kristallnacht was unthinkable in 1930; is its descendent "progressive" radicalism unthinkable now?

Yes, that's a great question, Tom. Is it so unthinkable that cruel attacks on "techno geeks" in the local newspaper might lead to all of Silicon Valley being set on fire, 30,000 tech bros arrested, at least 91 slaughtered, and eventually, the rounding up 6 million little busy bees at Google and Facebook and Apple and forcing them into ovens?

Let us answer that question for you, Tom. The parallel of Nazi Germany and some people getting kind of annoyed by the tech bro dudes is exactly ZERO. If you don't believe us, treat yourself to a trip to the Museum of the Holocaust, where you can see the grotesque photographs of all those millions of dead Jews, and not a single one of them wearing Google Glass. And let us give you another protip: The only thing that is like Nazi Germany is Nazi Germany. You and your fellow tech brethren are still perfectly free to Uber all around the Bay Area, sipping your craft cocktails and eating artisanal toast. No one is coming for you and your family and your money and your art collection and your teeth. No one is firing up the ovens, except to make you a $48 Chilean sea bass, because you probably don't even care that they are endangered.